The Indian office market remains a bright spark within the Indian real estate industry, especially given the current prolonged slump in the residential sector. With the domestic NBFC crisis casting a further shadow on the refinancing market, which has been key to the residential sector keeping its head above water in during times of recovering sales and GST impact still being felt, the commercial sector in the same time has gone from strength to strength.

When 2018 marked a historic peak in leasing activity numbers, clocking 48 sf, it was expected to be sustained for the next 2-3 years. However, 2019 seems on track to surpass that easily with H1 clocking impressive leasing numbers of 32 million sqft; accounting for 2/3rd of the total 2018 number.

What is interesting to note is that, in 2018, the H1 activity was around 14.7 million sqft with the H2 of 2018 seemingly adding the momentum through 33 million sqft of activity recorded over that period. Similarly, pre-leasing activity in H2 2018 was 80% of the year’s total of 15.6 million sqft. We seem to have carried the H2 2018 momentum into 2019 with a strong performance over the first half. Preleasing activity is already 5.9 million sqft in H1 2019, 2X the H1 2018 preleasing numbers.

Term renewals have featured prominently in the space take-up story of 2019 so far, which ties with the partial market recovery in office demand that started to be visible during the year 2010 across the major tech cities. 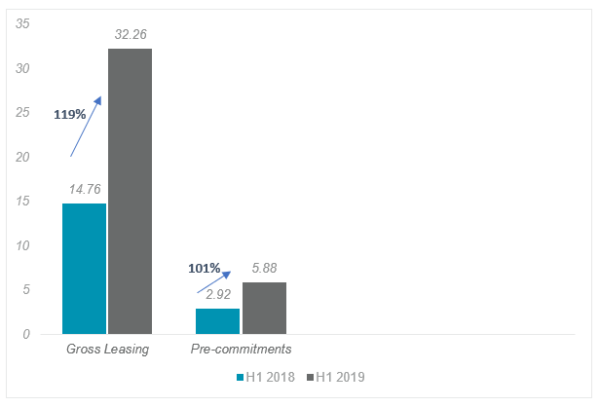 Bengaluru continues to remain the biggest office market in terms of leasing activity, leaving others behind in its wake as it retains its tech leader position. It accounted for 30% share of gross leasing in Q2 2019, followed by Mumbai and Delhi NCR with near equal share of around 18.3%. Mumbai was the biggest mover with Q2 leasing activity 75% higher on a q-o-q basis. 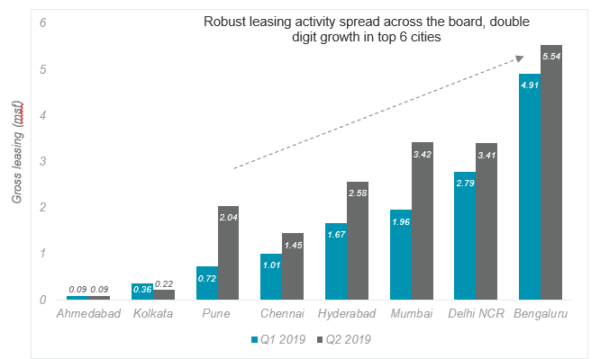 The IT-BPM sector with a strong 41% share of leasing activity in Q2 2019 compared to 25% in the previous quarter came back strongly on the back of large transactions over this period. Captive centres (global capability centres) and flex workplace operators accounted for 14% and 10% share of leasing activity in Q2 2019. Flex operators have taken up 4.2 million sqft in H1 2019, compared to 5.0 million sqft in full 2018. We expect this segment to account for around 7-7.5 million sqft of space take-up by end of 2019 even as managed workspaces have gained appreciable traction from large corporates in an environment of cost savings and consolidation. H1 2019 leasing activity has been dominated by Bengaluru and Delhi NCR with shares of 31% and 23%, respectively in this occupier segment.

India’s growth as a key captive centres market remains on track even as these centres are growing beyond the conventional tech cities. While Bengaluru accounted for 49% share of H1 2019 leasing by captive centres, Mumbai had a strong 31% share in this segment. 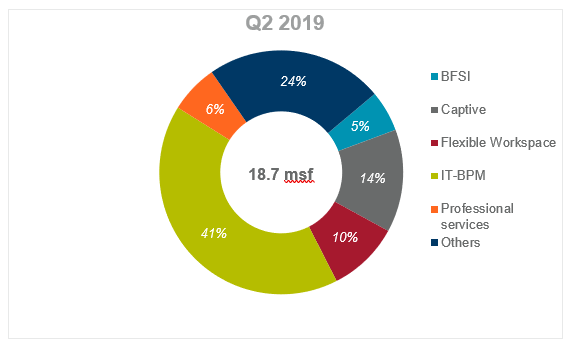 The supply build-out activity that started in 2015-16 has started to show results with heavy completions hitting the office market. While 34 million sqft was completed/added to Grade A office supply in 2018, H1 2019 has already seen 30 million sqft of new projects being completed and added to the pan India office stock which now stands at 541 million sqft.

Despite the supply additions, we continue to see single digit, tight vacancies in cities like Bengaluru, Hyderabad and Pune and in core markets of cities such as Delhi-NCR, Mumbai and Chennai. Considering preleasing levels and ongoing space requirements, we expect that future supply in these cities and relevant core markets will not ease the vacancy constraints in the short to medium term. This creates an environment that is likely to support further rent growth and hence occupiers may look to move aggressively to lock down spaces in such locations.

With net absorption volumes likely to hit a peak of close to 37-40 million sqft, it translates to 5-6 lakh jobs which are likely to be added to the white-collar workforce over the period of 2019 and beyond. This adds to the overall job market as a single tech job in turn could fuel 5-6 ancillary jobs in its wake.

A strong office market performance and the resultant positive impact in job creation could push consumption-led demand as well as inject some momentum to the residential sales market.

India’s continued strength in the IT-BPM sector and its emergence as a R&D and captive centre hub and centre for new technology sectors along with an evolving workforce fuelling the growth of coworking, is expected to sustain the upward momentum in India’s office sector.