When we think about the phrase ‘smart industry’ (a key part of China’s ‘new’ economy), many thoughts spring to mind, such as smart manufacturing, smart business strategy, etc. One element of smart industry is of course technology, and a group of companies that are heavily tech-orientated are the unicorn companies of late. In this section, we look at the rise of unicorns globally and in China as well as the potential impact that China unicorns are having, and will have, on China’s commercial real estate market.

The explosive growth of the global tech sector in recent years has led to a wave of new start-ups around the world and with it, a new class of company – the ‘unicorn’. First coined in 2013, a unicorn is defined as a private company with a valuation of over US$1 billion. As of Q1 2018, there were 236 of them worldwide with a combined valuation of US$803.7 billion, according to CB Insights.

While the U.S. currently leads in the number of unicorns, accounting for nearly half of the global total, China is the second largest source with 64 as of 1Q 2018. When it comes to the top 10 unicorns globally by valuation, however, the U.S. and China are neck-and-neck with five each. 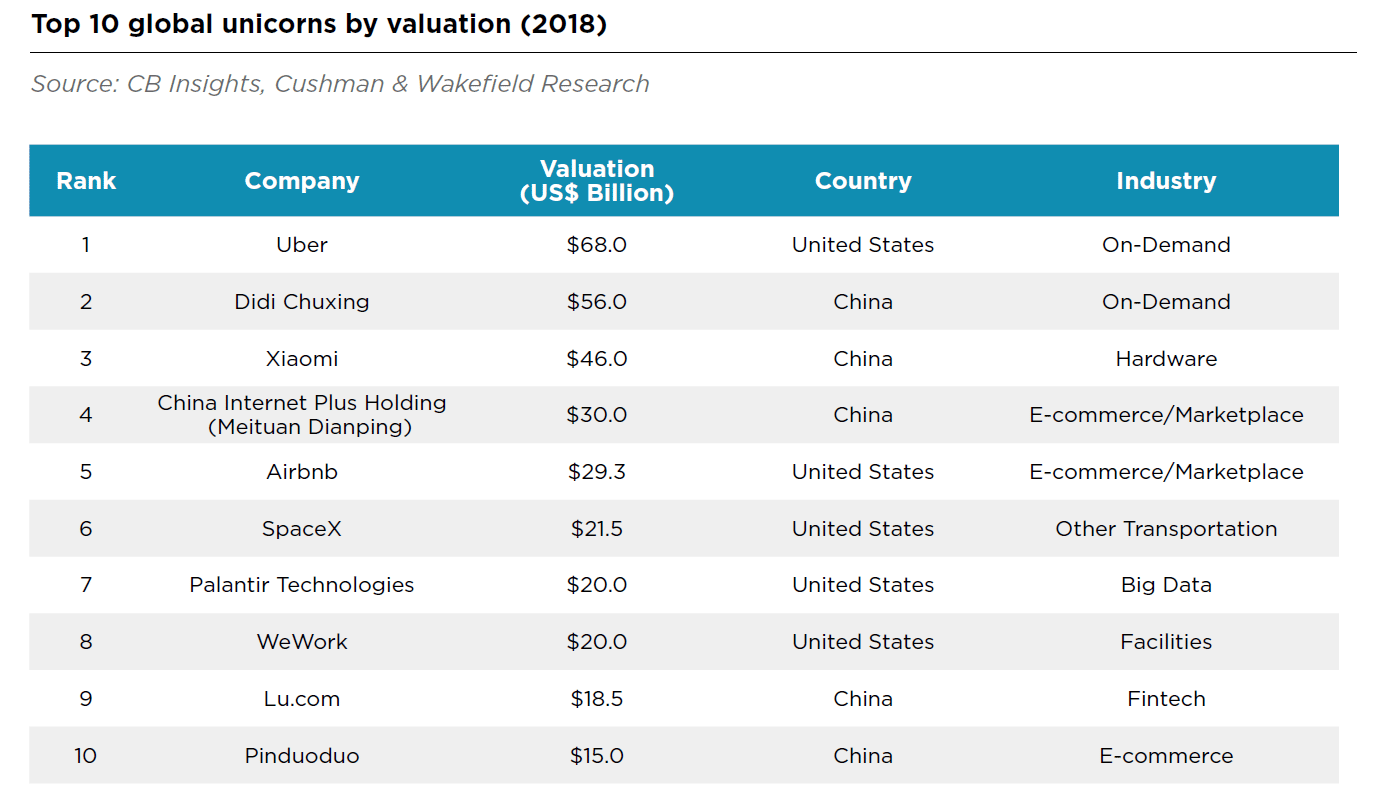 In 2017, nearly a third of new unicorns globally originated in China. This growth is set to continue, buoyed by a new wave of entrepreneurialism and an enormous population of Internet users in the country. In the five years between 2013 and 2017, according to the National Statistics Bureau of China, the number of newly registered companies in China more than doubled from 2.5 million to 6.1 million.

Meanwhile, start-ups in China are reaching the unicorn threshold of US$1 billion valuations quicker. According to a survey undertaken by Boston Consulting Group, it takes the average unicorn in China just four years to reach that level, compared to seven years in the U.S. As of today, China’s top 10 unicorns have a combined valuation of US$203 billion. 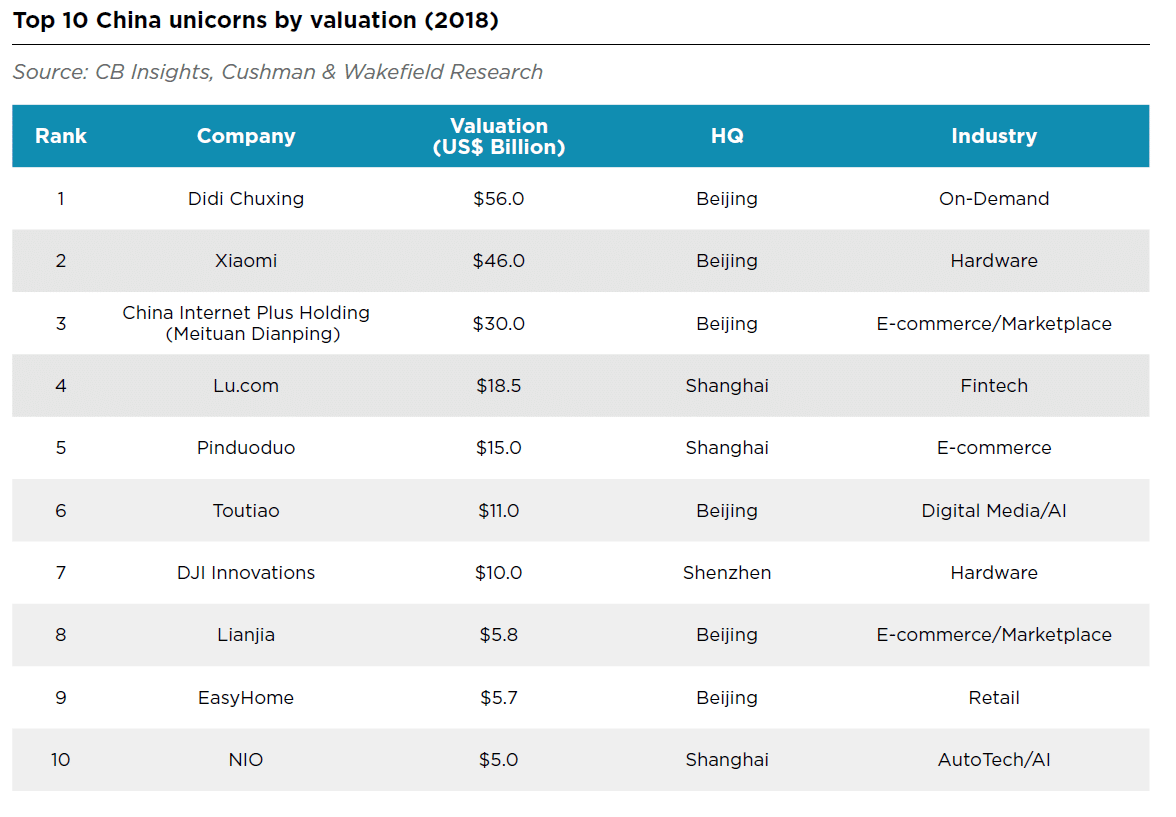 In its drive to promote innovation-led development, the Chinese government is taking an active role in fostering the growth of start-ups in key industries. Announced in 2015, ‘Made in China 2025’ is a plan to elevate the country to become a global leader in 10 strategic industries, among them artificial intelligence, IT and robotics. It is no coincidence that many of China’s unicorns are companies focused on these sectors.

Elements of ‘Made in China 2025’ include support by way of low interest loans, tax breaks and rental subsidies to startups involved in these industries. More importantly though, in the past three years since the plan was announced, hundreds of government-led “guidance funds” at the central, provincial and local levels have been established to steer financing to such companies.

Further enabling the rapid rise of many Chinese unicorns is the backing of Baidu, Alibaba and Tencent (BAT). Each a tech heavyweight in its own right, their combined market capitalization of US$1.1 trillion as of the end of Q1 2018 provides enormous financial power with which to supercharge the growth of Chinese startups. Of the 64 CB Insights-listed Chinese unicorns, 48.4%, according to Crunchbase, have received funding from the BAT group.

What’s more, when breaking down the overall picture to emerging business areas where unicorns are at play, the BAT group in China is also at the forefront of driving investment into several new commercial realms. When compared to U.S. Internet giants and according to S&P Capital IQ, we can see the BAT group is a major force in investing into frictionless on-demand shopping and the changing consumer industry.

The rise of unicorns and their potential for very rapid growth can have an enormous impact on commercial real estate demand. Consider the example of Uber, which was founded in 2009. Today, it is a US$68 billion company, employing 16,000 staff around the world and boasting office locations in 424 cities. In its home of the San Francisco Bay Area, Uber now has one of the largest office portfolios in the area with over 185,000 sq m.

A similar story is playing out among unicorn companies in China. In just a few short years, ride-hailing platform Didi Chuxing has emerged as China’s top valued unicorn at US$56 billion as of Q1 2018. Just in the past five years, it has grown its user base from around 300,000 in 2013 to 450 million in 2017. And since 2015, when it merged with rival firm Kuaidi Dache, the number of employees has grown 10 times from 700 to over 7,000. With such sudden growth has come a massive expansion in office needs. Today, the company leases around 110,000 sq m of office space in China, for its Beijing headquarters and locations around the country.

Likewise, China’s second largest unicorn, Xiaomi, has in eight short years emerged to become the fourth largest smartphone maker in the world. During that time, it has grown from 250 staff occupying three floors of an office building in Beijing to a global company employing 15,000 staff. To house its rapidly increasing headcount as well as those of several strategic partners, in 2015 it embarked on construction of its new campus near Zhongguancun Technology Park. According to chinamoneynetwork.com, the new state-of-the-art campus, to be completed this year, will encompass eight buildings totaling 340,000 sq m and include staff amenities such as a gym, yoga room, culture center and roof-top garden.

In terms of locations, the headquarters of China’s unicorns are highly concentrated in a select number of Tier-1 and Tier-2 cities. At the top of the list is Beijing, where a plethora of the country’s unicorns call home. 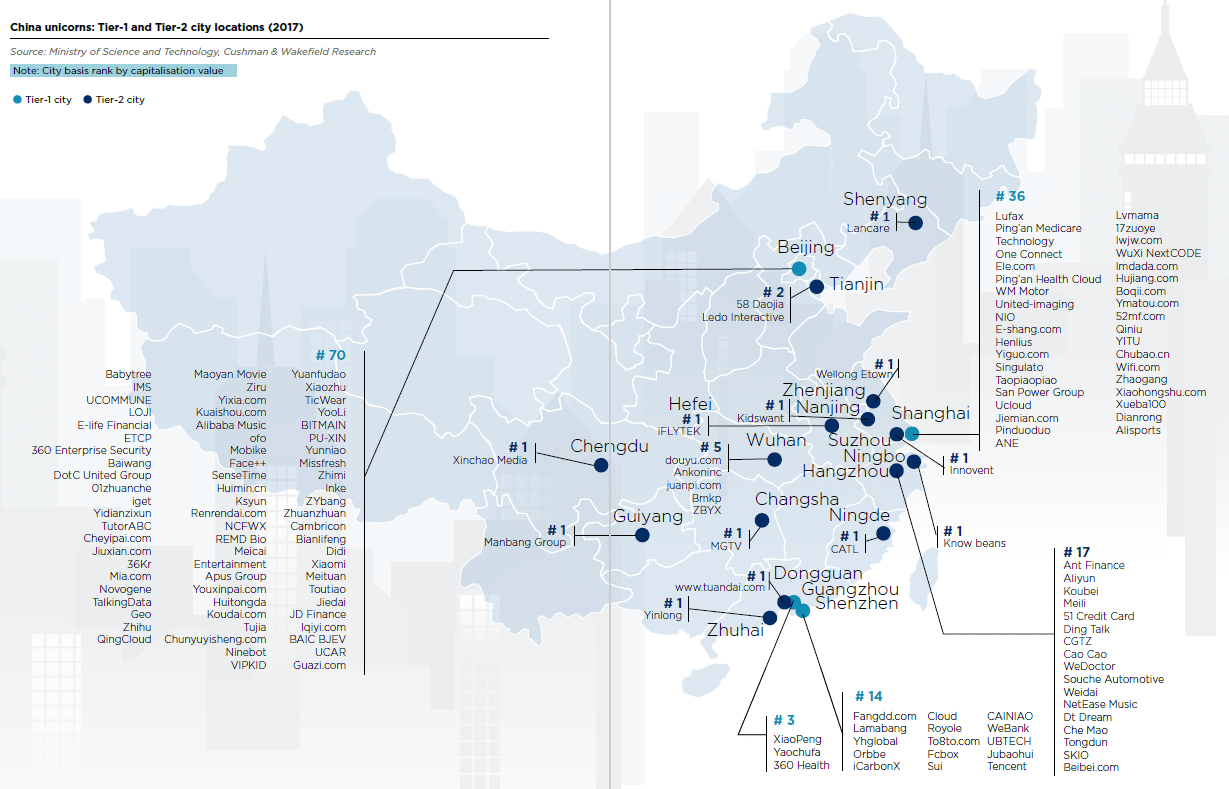 That is attributable to a number of factors that contribute to a unique ecosystem supporting the growth of start-ups in these cities. Among these are a large number of venture capital firms, high concentration of top-tier universities and close proximity to government, which is useful when it comes to policy decisions relating to the fast-evolving IT sector.

Possessing similar advantages to Beijing, Shanghai has the second highest concentration of unicorns in China. Rounding out the list of top locations for unicorns, cities in the Greater Bay Area in Guangdong are a preferred location for firms focusing on hi-tech manufacturing, while Hangzhou draws many firms involved in e-commerce due to Alibaba’s presence there.

Such rapid growth among unicorns, along with their concentration in a select number of cities, can have a significant impact on office rentals, particularly in high-tech zones where many of them locate. Zhongguancun, a high-tech hub in Beijing that is home to nine unicorns including the top three in the country by valuation (Didi Chuxing, Xiaomi and Meituan Dianping) is an example of this. Over the past three years through the end of 2017, the average Grade A office rental in the area increased by 32.1% compared to 5.6% for the city overall. As of year-end 2017, the average rental there was RMB380.3 per sq m per month compared to RMB395.7 per sq m per month for the city overall despite its location outside the core downtown area.

Unicorn commercial space ownership and use set to grow

As China continues its drive to become a leader in hi-tech, we expect the number of unicorns in China to continue to grow in coming years. And given their potential to experience exponential growth in headcount, and by extension, space needs in a few short years, they are set to have a massive impact on the commercial real estate landscape in the country.

For more on how smart, sharing, and green trends are shaping China’s economy, download our full report.