If there was any wonder as to what has been driving commercial (as well as economic) growth in the Bay Area during this last decade, our new office gross leasing chart should make it perfectly clear.

Not surprisingly it is the tech industry of course. But what may be surprising is that the tech world has leased more office space than all the other major industry sectors combined from the beginning of 2011 through midyear 2019, totaling 177 million square feet (msf) versus 170 msf. For purposes of this exercise, we reviewed gross office leasing activity (new deals and renewals) throughout the Bay Area to include the counties of San Francisco, San Mateo, Santa Clara, Alameda, Contra Costa, Marin and Sonoma. 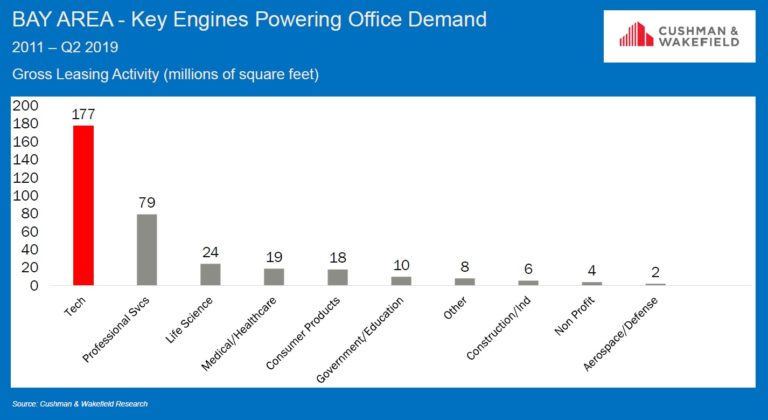 Tech has led the march every year, and often by a substantial margin, with at least twice the amount of leasing activity than the next highest group—professional services— in every year since 2014. Notably, there has been some ebb and flow during the period though with total tech leasing slowing down in 2016 and 2017 to just over 16.0 msf per year compared to over 22.0 msf per year in 2013 and 2014. However, they all pale in comparison to 2018‘s blockbuster year with nearly 32.0 msf in tech leasing activity.

Professional services picked up in 2018 from recent years to 8.7 msf, however was down considerably from this cycle’s highest level of 13.0 msf in 2011. Beyond tech, another sector that managed a big uptick was life sciences with 4.5 msf of leasing in 2018, almost double the 2017 figure. Overall, 2018 was this cycle’s best year with 52.2 msf of gross leasing across all industries, while 2011 was the second best at 45.3 msf. Each of these years may also be among, if not the, highest years ever on record—though we cannot say definitively.

So what does 2019 look like thus far? Well it is safe to say it will be impossible to beat 2018 with tech currently at just over 12.0 msf in leasing, professional services at 2.8 msf and life sciences at 1.4 msf. If we stay on the same trajectory, we should be near the average over this period which is 38.6 msf.