In a series of three snapshots focused respectively on the economy; key office trends—what we know and don’t know; and a 2021 outlook, we explore some of the factors that will shape this calendar year.

As we have discussed throughout this series, we are admittedly making predictions during a period of exceptional uncertainty. Clearly the situation remains fluid. The trajectory of the virus, the rollout of the vaccines, confidence—all of these are still moving targets. But in studying the pandemic’s impact for the better part of last year, we have also observed some key trends that will help inform the future.

Here’s what we know:

We know that the virus’ path is central to the office sector recovery, and there is good news on that front. As of early February, roughly 11% of the U.S. adult population has received at least one dose of the vaccine. We also note that the seven-day moving average of vaccines being administered was trending up, and that the number of vaccinations was easily outpacing the number of new confirmed daily infections. Most baseline forecasts assume the vaccines will be widely distributed by mid-2021 in most advanced countries and in some emerging markets. In the U.S., it is currently assumed full herd immunity will be reached by September or October of 2021. 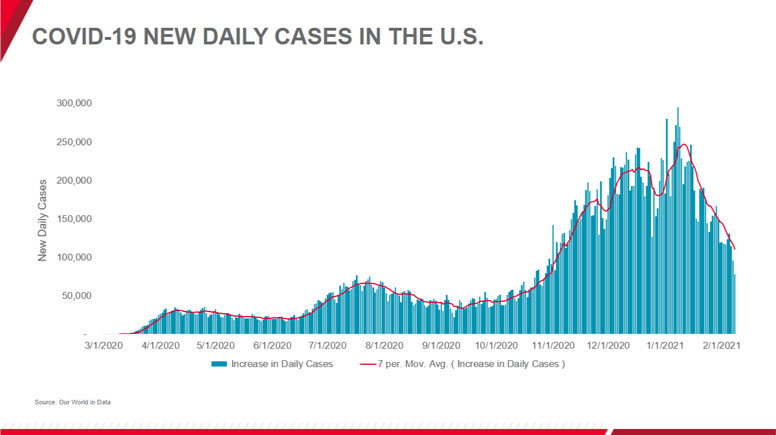 We know that the pandemic did significant damage to the office leasing fundamentals last year. In the U.S., we observed 104 msf of negative absorption in 2020, which was more severe than what we observed during the entirety of the Great Financial Crisis. Office vacancy rose from 12.9% pre-pandemic to 15.5% by year-end. And we know that the work-from-home dynamic still needs to filter through. 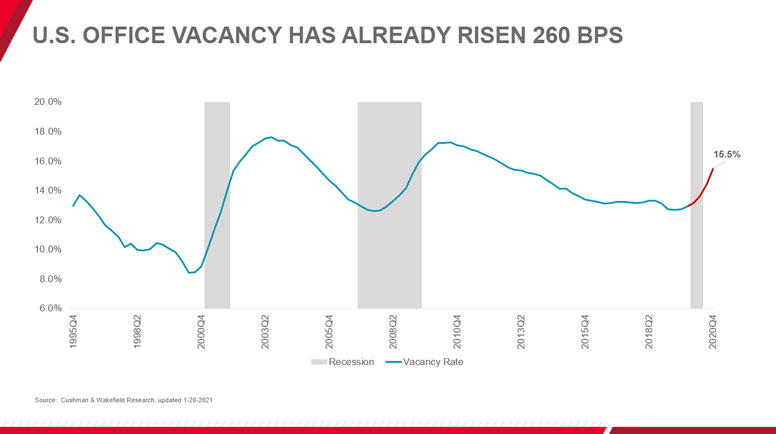 We also know that, according to multiple studies and surveys, conducted both by the CRE industry and outside of the industry, most companies do plan on returning to the office when it is safe to do so. From various focus groups and studies, very few businesses are indicating that they plan to move to a 100% remote-working model. According to a recent survey conducted by PwC, 87% of executives believe the office is critical for collaborating with team members and building relationships, while the remaining 13% are considering a more virtual remote working model.  There may be some companies that return to 100% in-office and some that experiment with 100% virtual, but these will be the outliers post-COVID-19. Instead, most will be hybrid—a mix of remote and in person—at least for the foreseeable future.

We know that COVID-19 does not change the fact that the economy has been undergoing a structural transformation into a knowledge-based, professional services-oriented economy. That transformation has been going on for decades. On the other side of the pandemic, the economy will continue to create office-using jobs at a faster rate than most other sectors. The U.S. is forecast to create five million office-using jobs this decade (2020-2030), up from 4.6 million last decade.

We also know that in certain parts of the world, where the virus has been more contained, the office sector has already started to rebound. In the Asia Pacific region, for example, office space absorption turned positive in the second half of 2020 and office sales volume increased by 9% in the fourth quarter compared to a year ago. Although every region of the world is different, if the trajectory in Asia Pacific is a useful guide, when the virus becomes less threatening, the office sector will begin to recover. 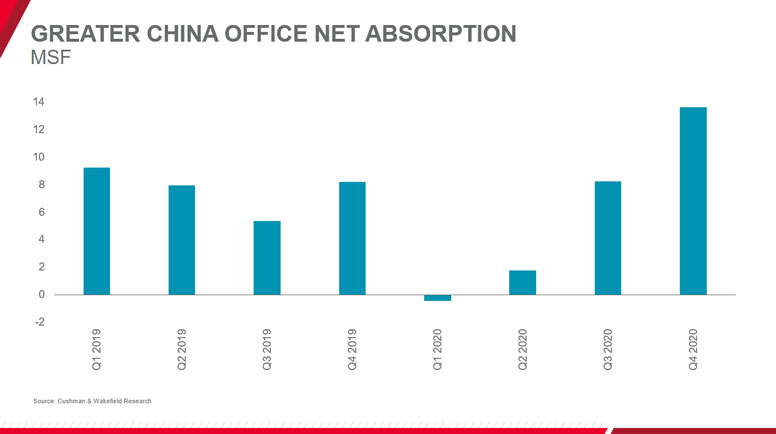 Although much is still unknown and unclear about the specifics of this new dynamic and the U.S. office sector overall, we have outlined some important themes for companies to consider as they look to 2021 and beyond.

Although rents are expected to decrease nationally as tenants start to make more decisions and take advantage of the oversupply in the second half of 2021; our modeling indicates that rents will bottom in most markets in the first half of 2022.

2020 will go down as one of the most difficult years on record, and thus far, the start of 2021 hasn’t gone much better. However, there are clear signs that the world is now beating the virus, and as a result, economic outlooks are being revised upwards. The general consensus assumes U.S. real GDP will grow in the 4-5% range in 2021, with more recent forecasts on the higher end. A strong pent-up demand dynamic is forming, and it is becoming increasingly clear that the worst of the pandemic’s impact on the economy, and by extension the office sector, is also largely behind us. A full recovery will take time to complete, but the future looks increasingly bright. 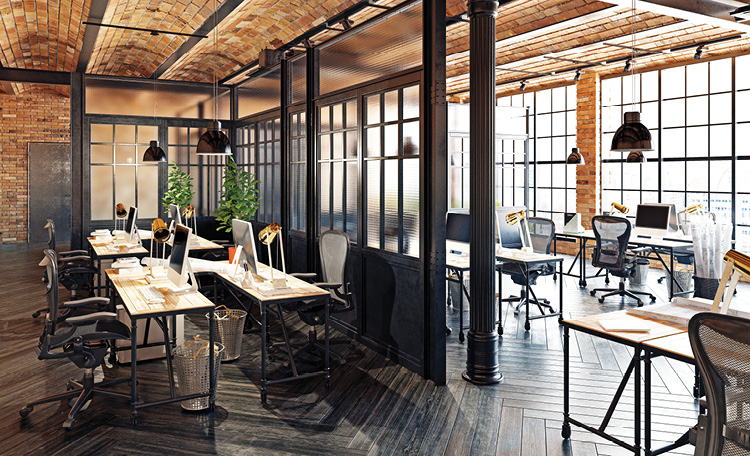 In a series of three snapshots focused respectively on the economy, key office trends, and a 2021 outlook, we explore some of the factors that will shape this calendar year.
Kevin Thorpe • 1/26/2021
Your privacy matters to us

MORE OPTIONS
Kabul et ve Kapat
These cookies ensure that our website performs as expected,for example website traffic load is balanced across our servers to prevent our website from crashing during particularly high usage.
These cookies allow our website to remember choices you make (such as your user name, language or the region you are in) and provide enhanced features. These cookies do not gather any information about you that could be used for advertising or remember where you have been on the internet.
These cookies allow us to work with our marketing partners to understand which ads or links you have clicked on before arriving on our website or to help us make our advertising more relevant to you.
Cookie preferences
Agree All
Reject All
SAVE SETTINGS
Essential
Non Essential
Marketing