Despite the coronavirus pandemic, the German hotel sector is still expanding. This positive business climate was revealed in a survey carried out in the course of May and June by internationally-active property consultancy Cushman & Wakefield (C&W). For the Operator Beat, C&W asked more than 30 professional operators being active Germany about their appetite for the 20 top hotel markets – and invited them to share their outlook.

Of those contacted for the survey, almost 95 percent expected the German hotel market to recover to its 2019 record level by 2022 or 2023 latest; none of the respondents, however, were expecting a full recovery next year. The focus on expansion remains unbroken, with 85% of operators reporting that all or most of their developments continue as planned; the fact that 84% are expanding and bidding on new leases underscores the sustained levels of activity in the sector. 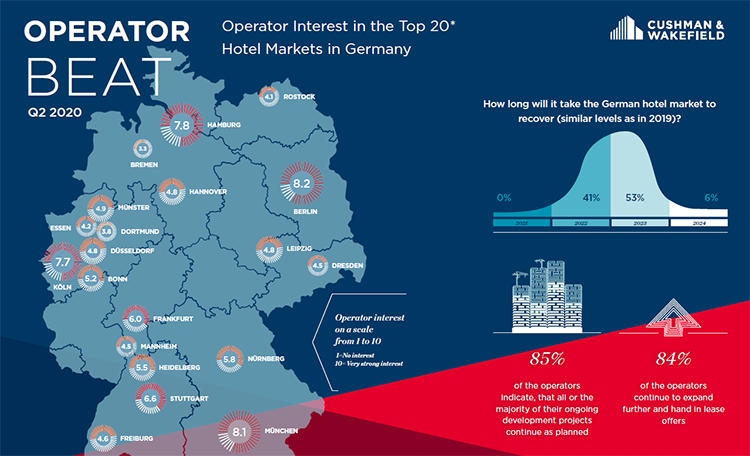 Berlin, Hamburg, and Munich considered most attractive; Cologne on an upward trend
As expected, operators identified Berlin, Hamburg, and Munich as their priority targets for expansion – a category in which Germany’s three largest cities have now been joined by Cologne. With its relatively restricted development pipeline and balanced demand mix, Rhineland’s largest city famed for its cathedral is considered a promising prospect in the sector.

Second-tier locations potentially more lucrative than prime cities
Despite the focus on Germany’s prime cities, the potential in second-tier locations such as Stuttgart, Nuremberg, and Heidelberg is by no means going unnoticed, with respondents to the survey reporting more interest in them than in prime Frankfurt and Dusseldorf. Both cities are rendered less attractive due to a strong development pipeline and a pronounced dependency on trade fairs and business travel. Other second-tier cities singled out in the survey were the university cities Bonn and Muenster, both of which make up for comparatively low overnight stay figures with strong growth potential.
“Overall, we expect second-tier locations with strong domestic demand to recover faster than cities with a high dependency on trade fair events and bookings from outside of Europe,” explains Christian Kirchhoff, Associate Director, Head of Hospitality Advisory Germany & Austria at Cushman & Wakefield.

“What the results of this survey show,” concurs Stefan Giesemann, Partner, Head of Hospitality Germany & Austria at Cushman & Wakefield “is the high levels of confidence in the German hotel sector overall and the strong potential in the European market. We expect that Germany’s status as a ‘safe haven’ for investors will become increasingly cemented and that, as performative metrics recover, investment activity in the hotel sector will start to expand again.”