The COVID-19 pandemic is entering its second year. The lockdown, which has been ongoing since November 2020, and the third wave of infections are slowing economic activity. In the office letting market, the effects are evident in the form of restrained demand and increasing availability. Office users are increasingly considering the nature of future office structure post-pandemic. This indicates increased market activity for the rest of the year.

The economic situation at the end of the first quarter of 2021 is robust, despite the months-long lockdown, with a positive outlook in sentiment indicators:

"Despite the brightening economy, uncertainty and caution remained in the office letting market in the first quarter of 2021. Office users largely held-off on their space decisions. As was already the case in the second half of 2020, 'If you don't have to make a decision, wait and see' continues to apply. In many markets there was a high level of volatility in sentiment during the quarter, a back and forth between good news (economic brightening) and bad news (new or extended lockdown, vaccination strategy progressing slower than hoped). So there were two moods, a binary market, so to speak," comments Christian Lanfer, Head of Office Agency Germany at Cushman & Wakefield. 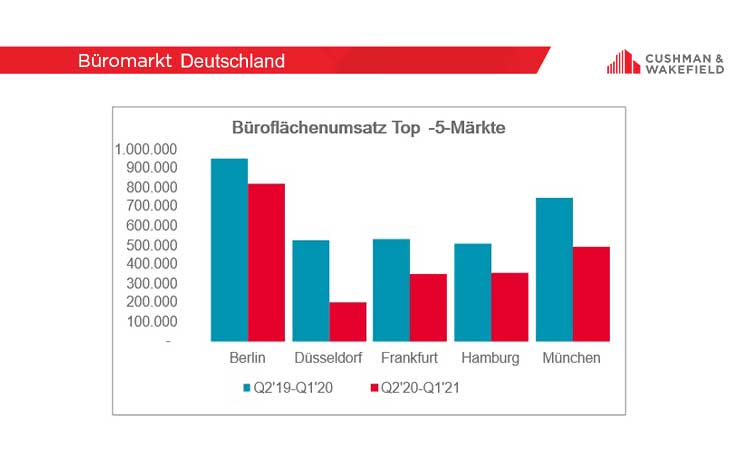 Among the top 5 markets, Berlin is by far the strongest in terms of take-up, at just over 200,000 sqm (+54% year-on-year). Hamburg follows with 126,000 sqm (+13%) and Munich with 104,000 sqm (-41%). Berlin is also clearly ahead in terms of large-scale deals. Of the total of nine deals of 10,000 sqm or more (around a quarter of total take-up), six were in the German capital. This includes the largest deal of the quarter, the development project pre-leasing by Deutsche Kreditbank (DKB) of 34,000 sqm. The analysis of concluded leases by rental price shows a continuing shift towards the high-priced segment. The proportion of deals with a rental price of 20.00 euros per sqm and month or more has increased significantly and steadily in recent years. From around 30% in 2017 to over 50% in the first quarter. This trend is largely driven by rising rents in Berlin and Munich.

In the sector statistics, as in the long-term view, the ICT/online platform sector (17%) leads ahead of public administration (14%). Banks and financial service providers (13%) contributed a significantly higher share of take-up than in previous years (7%), not least due to three deals of 5,000 sqm or more.

"We had already noticed in autumn that the supply of space for subletting was increasing. This supply of space is now being let more and more, accounting for around 6% of take-up in the quarter. In the whole of the previous year this figure was 4% and in the preceding years it was around 1%," analyses Helge Zahrnt, Head of Research & Insight Germany at Cushman & Wakefield. And he continues: "But the amount of sublet space on offer also increased further in the quarter, with around 360,000 sqm available in the top 5 markets."

Prime rents remain stable for the most part
Prime rents remained stable, with the exception of Frankfurt, where an increase to 46.00 euros per sqm per month was recorded, as the availability of prime space has fallen significantly. There is no uniform picture for average rents: developments vary from Düsseldorf (-11%) to Hamburg (+5.9%). In general, however, it may be stated that nominal rents remain stable, while effective rents are declining slightly on average. Rent incentives in central locations have risen from an average of 1.4 to 3.3 rent-free months in the 12-month period - equivalent to 5.5% for a term of five years.

Outlook: Hybrid office solution will prevail
"The working from home experiment is currently continuing for many companies. The initial success is being replaced by an increasing level of home-office fatigue as five days per week working from home is too much for the vast majority of employees. A hybrid solution will emerge, with a mixture of priority work in the office and remote working from home or other locations. What is certain is that offices will have to reinvent themselves and spatial structures will have to be adapted more to suit working methods," comments Helge Zahrnt.

"As soon as the pandemic is contained by tests and vaccinations and companies make decisions regarding their future office work structures, many occupiers will again be more active in the letting market. This is expected to make the second half of the year more dynamic and thus to achieve an annual take-up of 2.4 million sqm, up from 2.2 million sqm in 2020. This would still be 25% below the previous five-year average of 3.2 million sqm," Christian Lanfer sums up.