At the start of the year, the Düsseldorf office letting market continued the weak take-up of the previous quarters and achieved a take-up of 48,600 square metres in the first quarter of 2021. Compared to the previous year, this corresponds to a decline of around 58 per cent. A comparably low quarterly result was last registered in the crisis year 2009. International real estate consultancy firm Cushman & Wakefield notes a similar picture on the commercial real estate investment market. The transaction volume of 243 million euros represents a decline in take-up of 77 percent.

The Düsseldorf office market recorded weak take-up at the beginning of the year, well below the average letting figures. The 5-year average of first quarters is around 99,200 square metres. "Due to the continuing uncertain pandemic development and the ongoing lockdown, companies are finding it difficult to make leasing decisions - this is especially true for large occupiers with long and intensive review processes," explains Luisa Rotthaus, Branch Manager and Head of Office Agency in Düsseldorf at Cushman & Wakefield, adding "It is not that there were no lettings at all, the weak take-up result inadequately reflects the level of leasing activity. We have seen a lot of lettings in the small-scale sector so far this year and have already registered more lettings overall than in the high-take-up first quarter of last year. There is however a clear lack of large deals and currently only a few large searches are active on the market," Luisa Rotthaus continues. Nationwide, there are no uniform social distancing easing measures or even an end to the lockdown in sight, so that uncertainties about companies' future space strategies continue to predominate. "Taking into account the aforementioned problems, we must also prepare for a comparable take-up this year as last year, at less than 300,000 square metres," Luisa Rotthaus predicts in conclusion. 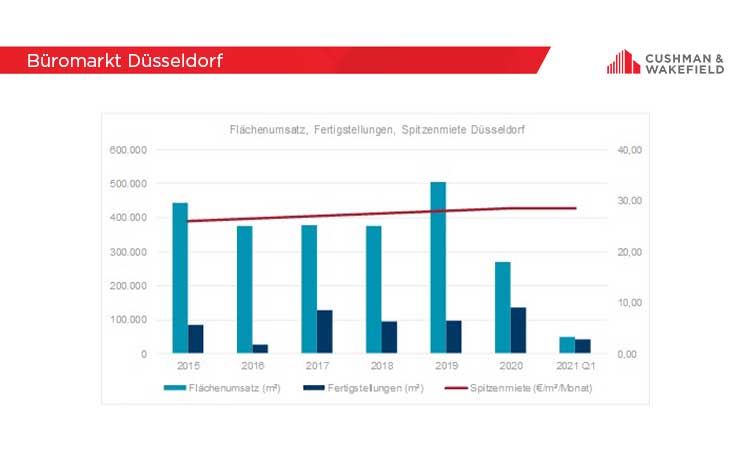 Major leases failed to drive take-up
The low quarterly result is largely due to the lack of lettings of more than 5,000 square metres. The largest lease concluded to date, at around 4,200 square metres, was the leasing by Mitsubishi Chemicals at Schiessstrasse 45-49 in the Linksrheinisch submarket. This is followed at a distance by the letting to the Bundesanstalt für Immobilienaufgaben with 2,700 square metres in the Kennedydamm submarket.

By contrast, demand was particularly high in the small-space segment up to 500 square metres. Almost a third of all leases were concluded in this size category, which thus makes a decisive contribution to the high total number of office space leases in Düsseldorf. With a total of 70 lettings within this size class, the number is already above the level of last year.

Prime office rents remain stable
The achievable prime office rent at the end of the first quarter is 28.50 euros per square metre and month achieved in the Central Business District (CBD) submarket. This means that the prime office rent has remained at this high level for three consecutive quarters. In the comparable period last year, the prime rent was 28.00 euros per square metre per month. Despite the pandemic, contractual rents remain stable, but trends towards rent-free periods and thus lower effective rents are discernible.

The weighted average rent for the past 12 months is currently 15.21 euros per square metre per month. Compared to the first quarter of the previous year, this corresponds to a decline of around eleven per cent. The main reason for this is the low number of large-scale lettings in the high-priced segment.

The vacancy rate at the end of the first quarter is 7.0 percent and has increased only slightly compared to the same period last year. In absolute terms, the total office space available for immediate occupancy has risen by around four per cent to just under 647,100 square metres.

However, the clear market dominance and high popularity of office properties among investors remains. A total of around 171 million euros was invested in office properties, which corresponds to 71 percent of the total transaction volume. The two largest office sales to date deserve special mention here: the acquisition of an office and medical complex at Luise-Rainer-Strasse 6-10 by Tristan Capital in the course of an off-market transaction and the sale of Hansaallee 299 from the supra-regional Commodus portfolio to CLS Holding. Retail properties follow at a large distance with a small market share of 15 per cent.

“The investment market can be seen as mirroring the rental market in the first quarter: Numerous transactions in the small price segment as well as high demand, but so far no large transactions in the three-digit-million-euro range," explains Angelo Augenbroe, Head of Capital Markets in Düsseldorf at Cushman & Wakefield. "The ongoing lockdown, the further course of which can only be calculated to a limited extent at present, has caused both buy and sell sides to exercise greater restraint with regard to investment and exit decisions. The 'product pipeline' was therefore not yet filled in the first quarter, which is now starting with a delay," Angelo Augenbroe continues.

Also due to the lack of large transactions involving institutional investors so far, the majority of all commercial investments are in the core+ and value-add risk classes. "Looking ahead to the coming quarters, however, we are in for a very dynamic market activity with some large-volume transactions as important turnover drivers. Among these are also some attractive and high-priced core properties, which draw unabated strong demand, high investment pressure and a lot of liquidity. Also, not reversal of monetary policy with currently historically low borrowing rates is expected in the medium term, while at the same time the supply of attractive alternative investments with stable cash flow remains very low," Angelo Augenbroe forecast in conclusion.

The prime yield for high-quality core office properties in very good central locations remained at 2.90 per cent in the first quarter of 2021. Compared to the same point last year, this represents compression of 20 basis points. Analogous to the office rental market, no pandemic-induced purchase price reductions are discernible in the investment market, especially for core office properties.