Office market Munich: Weakest first quarter since the turn of the millennium

The international real estate consultancy firm Cushman & Wakefield reports a take-up of 103,900 square metres for the Munich office market in the first quarter of 2021. The COVID-19 pandemic had already slowed down leasing activity in 2020. This trend continued into the new year. The quarterly result is more than 40 per cent below the previous year's equivalent figure of 177,600 square metres. The averages of the previous five and ten years were fallen short of by 51 percent and 44 percent respectively. No lower value for a first quarter has yet been recorded since the turn of the millennium.

Hubert Keyl, Munich branch manager at Cushman & Wakefield Germany, comments: "As expected, take-up remains low due to the ongoing COVID-19 pandemic. No large deals above 8,000 square metres were concluded in the first quarter. Take-up in the current year could remain below the 600,000 square metre threshold and fall to a similar level as in the crisis year 2009." 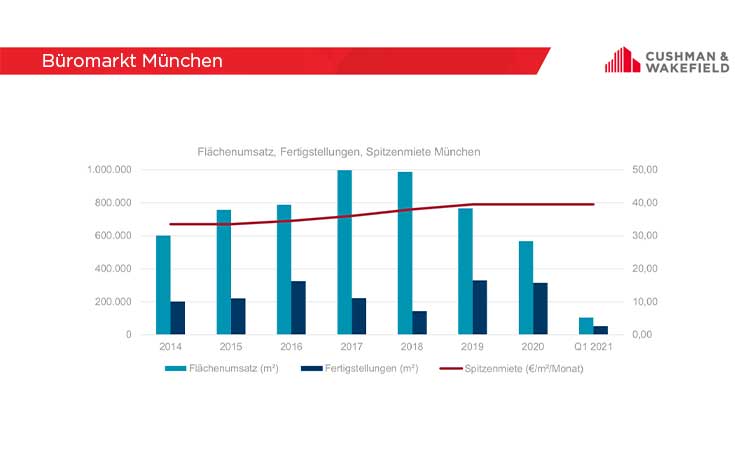 Falling average rent, stagnating prime rent
While the achievable prime rent has once again reaffirmed its historically high level of 39.50 euros per square metre and month, the average rent has fallen steadily since the second half of 2020. The weighted average rent for all new lettings in the first quarter of 2021 is currently 20.85 euros per square metre per month, 3.9 per cent or 85 cents lower than at the same point last year.

ICT sector most in demand, lawyers/notaries increasingly renting
The ICT sector remains the sector generating the highest demand in the Munich office market. It contributes almost 30 per cent to the overall result. Compared to the equivalent period last year, its take-up has risen by 27 per cent from 24,300 square metres to 33,100 square metres. On the other hand, the take-up of space by consultancy firms and the transport, traffic and logistics sector in particular fell sharply. The market share of the consultancy sector fell from 44 percent to six percent and the market share of the transport, traffic and logistics sector dropped from 15 percent to just under two percent.
Demand for office space from lawyers and notaries was strikingly strong, renting a good 7,300 square metres in the first quarter of 2021; in the same period last year they rented only 2,100 square metres.

Low investment volume
On the investment market for commercial real estate, the year also began very cautiously. Jan Isaakson, Head of Capital Markets Munich at Cushman & Wakefield, comments: "There was a particular lack of large-volume transactions. Nevertheless, demand for suitable office properties is high, especially for core and core+ properties, but there were hardly any offers on the market corresponding to the capital ready to invest." Against this backdrop, prime yields in central locations compressed by 10 basis points to 2.50 per cent in the first quarter.