The German investment market for commercial real estate including development properties exhibited a patchy picture in the first quarter of 2021. While the momentum in preparing properties for sale increased, a number of property owners were nevertheless hesitant to actively market their properties. This is despite the fact that there is not only a high level of buying interest in the market, but also an enormous amount of investment capital urgently seeking suitable real estate assets.

The brakes on market dynamics were the renewed increase in new infections with the SARS-CoV-2 virus, which ensured that contact and travel restrictions were not only maintained, but in some cases also tightened and extended to more countries. "Especially international investors without a presence in Germany were therefore scarcely able to carry out on-site visits. Virtual data rooms, for all their convenience and perfect design, cannot replace a personal impression in every case," comments Alexander Kropf, Head of Capital Markets Germany at Cushman & Wakefield. 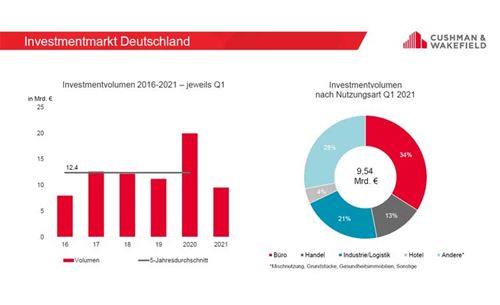 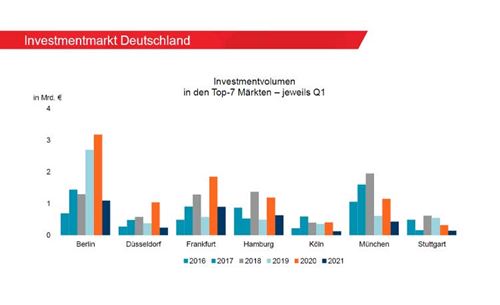 Solid quarterly volume of around 10 billion euros
Against this background, the transaction volume of almost 10 billion euros realised in the first quarter is a thoroughly solid result, even if it is nowhere near the record level of the first quarter of 2020. The average value of the first quarters from 2016 to 2020 is 12.4 billion euros, while that of 2011 to 2015 is 7.47 billion euros. "What was missing - especially compared to the equivalent quarter last year - were mega transactions beyond the one billion euro mark," analyses Helge Zahrnt, Head of Research & Insight Germany at Cushman & Wakefield, adding: "The largest sale by far, of the so-called Altas package, was announced shortly before the end of the quarter and amounted to just over 425 million euros. Overall, portfolios accounted for a quarter of total transaction volume. As in the preceding quarters, the sale of individual properties dominated activity in the market."

Investors adjust use-type weighting
As in the previous year, investor interest is primarily geared towards security, which means that the focus is on core and core+ properties. Among the use types, office properties have confirmed their position as the preferred asset class, contributing 34% of transaction volume. Industrial and logistics properties follow in second place at  just under 21%. Demand for healthcare properties was also strong in the first quarter, generating a volume of just under one billion euros (previous year's equivalent quarter: just under 500 million euros) and thus a contribution of 11%. Against the background of the ongoing German demographic shift as an ageing society, investor interest in this class is unsurprising. With a share of 13%, the retail sector is still just ahead of healthcare. The lockdown in force since November 2020 makes it increasingly difficult to make stable forecasts for the development of the previous magnets in the traditional shopping centres and especially in the pedestrian zones of the cities and, associated with this, to make any a sustainable statement about their future structure. Not every investor can or wants to tackle this challenge. The focus therefore remains on retail warehouses and retail parks with a grocery retailer as an anchor. "In general, it is apparent that investors are shifting the weighting in their portfolios or are planning to do so - less retail, also quite possibly a somewhat lower weighting of office properties and more weighting for residential and alternative use types," comments Helge Zahrnt.

Prime yields remain low
Against the background of unabated high investment competition, prices for the most sought after asset classes have sustained their high level. In the office sector, the median prime yield in the top 7 markets is 2.87%, a minimal further compression of two basis points compared to the previous quarter. The yield compression is more pronounced for prime logistics properties, where the median value moved in by 15 basis points to the current 3.34% in the last three months, widening the gap with the median value for prime commercial properties in pedestrian zones (3.78%) to 44 basis points.

Transaction volume of over 50 billion euros in 2021 forecast
It is not yet certain when society’s return to normality will actually be achieved. "On the one hand, stricter measures to combat the spread of the virus are currently being discussed, and on the other hand, model projects are underway in which a conditional and spatially limited withdrawal of restrictions in shopping, sports and culture is taking place, in conjunction with vaccinations and testing. However, it is considered certain that investors will continue to experience high investment pressure, that capital market interest rates will remain low and that investment market activity will gain momentum as soon as the development prospects become clearer. Against this backdrop, we continue to believe that a transaction volume of more than 50 billion euros and up to 55 billion euros is possible for the year as a whole," comments Alexander Kropf.