In the first quarter of 2021, international real estate consultancy firm Cushman & Wakefield (C&W) registered a take-up of 126,000 square metres in the Hamburg office market. After the crisis-ridden 2020, the new year is off to a comparatively strong start. In contrast to the previous three quarters, a quarterly result of over 100,000 square metres was achieved for the first time since the beginning of the pandemic. While the office letting market was able to start the new year with positive signals, the office investment market, with a transaction volume of around 425 million euros, is somewhat weaker than in the same period last year, but still at the level of the ten-year quarterly average.

Compared 94,000 square metres in the fourth quarter of 2020, take up increased by 35 in the first quarter of 2021 to 126,000 square metres. The year-on-year comparison also shows an increase of 13 per cent. "Against the backdrop of the pandemic, letting activity confirms that the mood in the market is fundamentally becoming more optimistic again," comments Tobias Scharf, Head of Leasing at Cushman & Wakefield in Hamburg, adding: "However, many occupiers are still waiting with their leasing decisions until it is more certain when the situation will finally ease." With the pace of vaccinations picking up and, at the same time, companies being able to plan more easily, leasing activity is likely to increase significantly and take-up in 2021 could be higher than last year. This development is also confirmed by some larger space searches in the market. 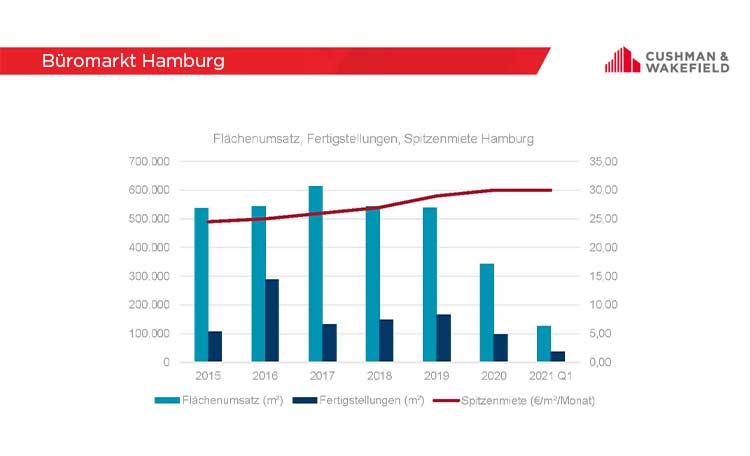 Overall, the pandemic has led to a significantly changed view of office space on the demand side. "The time is being used to adjust future space requirements and react to new needs," observes Tobias Scharf, continuing. "With the growing importance of working from home and the associated changes in the world of work, there are opportunities to create attractive workplaces for employees in terms of location and expansion, towards more collaborative space,".

"On the one hand, we see considerable change potential in this readjustment and, on the other hand, this change in demand may lead to an increase in demand for new office space later in the year," adds Marc Rohrer, Head of Capital Markets and Branch Manager of Cushman & Wakefield in Hamburg. In the current market environment, this potential demand is being met by a slight increase in supply. In the first quarter, the vacancy rate rose by 0.3 percentage points to 4.2 per cent, including a growing supply of subletting space. "However, this is still far below the level of the last crisis, the financial crisis of 2009, when vacancy peaked at 9.3 per cent," analyses Helge Zahrnt, Head of Research & Insight Germany at Cushman & Wakefield.

Hamburg City is by far the most sought-after submarket, with around 43,500 square metres or about 35 per cent of take-up. A total of 42 new leases were concluded here. "Central location and good transport links remain of great importance for companies," explains Tobias Scharf. With 20,700 square metres or 16 per cent of take-up, HafenCity came second, closely followed by Ottensen-Bahrenfeld in third place.

Unlike the prime rent, the weighted average rent rose slightly year-on-year. The weighted average rent across all building classes for the last twelve months in Hamburg is currently 17.90 euros per square metre per month. Compared to the same point last year, it has risen by 0.85 euros, or five per cent, from 17.05 euros. The main reason for this development is development project pre-lettings of over 2,000 square metres in the new developments that characterise the city, such as the Elbtower, the Ballinhof and the Springer Quartier.

Construction activity and pre-letting rates remain at a high level
During the first quarter of 2021, around 37,000 square metres of new office space was completed in Hamburg, 92 per cent of which is already pre-let or allocated to owner-occupiers.

A total of 605,000 square metres of office space is under construction and is expected to be completed to 2025. Of this, more than half (56 per cent) has already been allocated to users. For the space under construction, which is expected to be ready for occupancy in 2021 and 2022 (456,000 square metres), the pre-letting rate is already as high as 67 per cent. "The high pre-letting rates confirm that outstanding projects and project developments in good and very good locations are still in demand among users. The two large-scale leasings by Wintershall Dea and HCOB in HafenCity in the past two quarters are exemplary," Tobias Scharf summarises.

Hamburg's office investment market transaction volume matches 10-year average at the start of the year
"Compared to last year, the start to the investment year 2021 has been somewhat more restrained, but remains stable at the level of the ten-year average," says Marc Rohrer, Head of Capital Markets and Branch Manager of Cushman & Wakefield in Hamburg, adding: "Overall, office properties changed hands for around 425 million euros. Office investments remain the asset class most in demand, but supply of the preferred core and core+ properties was limited." The largest office transactions were the sales of the "Hamburg Süd Haus" in Willy-Brandt-Strasse and "D10" in Domstrasse. In the value-add segment, the sale of the Wintershall Dea headquarters in City Nord is particularly noteworthy. The headquarters, developed for Dea in the 1970s, was acquired by Becken with the aim of bringing the property into the new age of modern offices.

The outlook for the first half of the year is cautiously positive. "Currently, office properties with an investment volume of just under 1.2 billion euros are up for sale. However, many willing sellers are still holding off. We can already see that the supply pipeline will fill up in the second half of the year," observes Marc Rohrer.

The prime yield for office properties is stable at 2.80 per cent. "High demand for core product is encountering low supply, which will probably lead to slight yield compression in the course of the year," concludes Marc Rohrer.