Despite the figures, Hubert Keyl, Head of Office Agency Munich Cushman & Wakefield Germany, takes a positive view of the market: "Market participants are still acting cautiously and have not yet returned to the level seen before the COVID 19 pandemic. But take-up is rising slightly again. As a result of the experiences of the past months, we expect more desk sharing implementation by companies on the one hand and an even greater importance placed on building and location quality on the other. Against this backdrop, demand for premium space in the Munich city area with optimal transport links will increase. Overall, we expect total annual take-up to be just over 500,000 square metres." 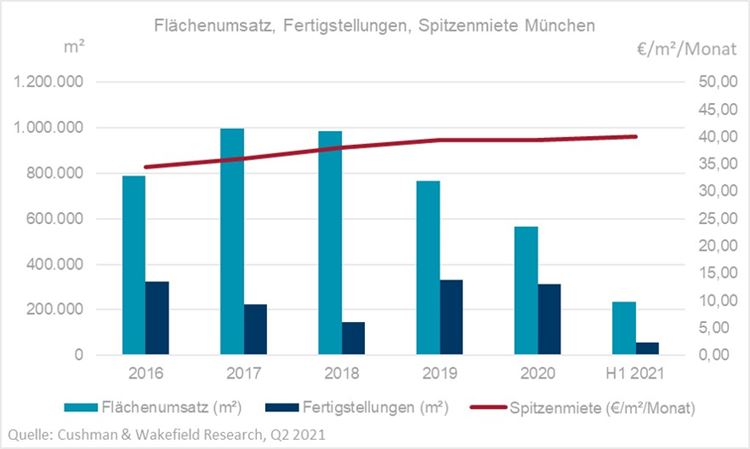 IT and industrial sectors with the highest turnover
As usual, companies from the IT sector are the largest source of demand. The 58 lettings in this sector in the first half of the year totalled 48,600 square metres. These companies thus contributed 21 % to total take-up. The city centre was particularly interesting for IT companies. Almost half of the leases they concluded were for space here.

The industrial sector follows in second place with take-up of 15 %, some 34,900 square metres. The major contributor to this total  was Wacker Chemie's leasing of 14,100 square metres in the Werksviertel. This is also the largest deal of the year so far and the only one above the 10,000m² mark.

Vacancy rate rises slightly
Due to the ongoing decline of new lettings since 2020, vacancy has increased over the past twelve months. Compared to the same time last year, it has risen by 37%, or 218,900 square metres, to 806,400 square metres. The vacancy rate in the market area is thus now 3.8%, compared to 2.8% a year ago.