Around EUR 2.3 billion was transacted on the Berlin investment market for commercial real estate in the third quarter, according to international real estate consultancy firm Cushman & Wakefield (C&W). This means that properties with a cumulative volume of EUR 6.7 billion were traded in the capital to the end of September this year. Compared to the same period last year, this represents an increase of 15 per cent. The Berlin investment market has thus returned to its pre-Covid-19 level.

Logistics properties up 283 per cent, offices remain frontrunners
Logistics properties achieved a conspicuously strong result, accounting for ten per cent (678 million euros) of the turnover for the year to date. Compared to the already above-average performance in the same period last year, this corresponds to a further increase of 283 percent.

Classic office properties, however, continue to account for the largest proportion of invested capital. They accounted for 36 per cent or 2.4 billion euros of the total turnover in the first three quarters. The highest purchase prices were achieved by the Victoria City Lofts with EUR 425 million and the Ministry of Health with EUR 214 million. A total of nine office properties traded for EUR 100 million or more.

EUR 2.0 billion or 30 percent of the capital invested in the current year flowed into mixed-use properties, including the "FÜRST" with over EUR 1 billion, the "Gloria Galerie" and the "Quartier 206".

Only four percent of the volume recorded so far was attributed to retail properties. The EUR 270 million registered by C&W corresponds to a reduction of 75 percent compared to the same period last year.

By the end of the year, C&W expects an investment volume of at least EUR 9.0 billion across all commercial uses.

41 percent of the invested capital came from investment and asset managers, followed by property developers with 20 percent and insurance companies/pension funds with 14 percent.

Clemens von Arnim, Head of Capital Markets Berlin at Cushman & Wakefield, comments: "We are seeing that investors' risk appetite is increasing again. Despite rising vacancy rates, there is enormous interest in development sites, which is impressively underpinned by the sharp rise in land prices. The rental market, which is currently picking up again, is also providing a following wind. We expect transaction volume and purchase prices in the value-add and opportunistic segments to increase in the coming quarters."

Prime yields for logistics and office properties remain under pressure
The prime yield for Berlin office properties is currently at 2.60 per cent, 30 basis points below the level of a year ago. Pronounced yield compression is seen particularly for properties with tenants with strong credit ratings, such as the public sector. Under these conditions, net yields of just over three per cent are now possible in individual cases, even in peripheral locations. C&W expects prime office yields to continue to compress slightly until the end of the year. 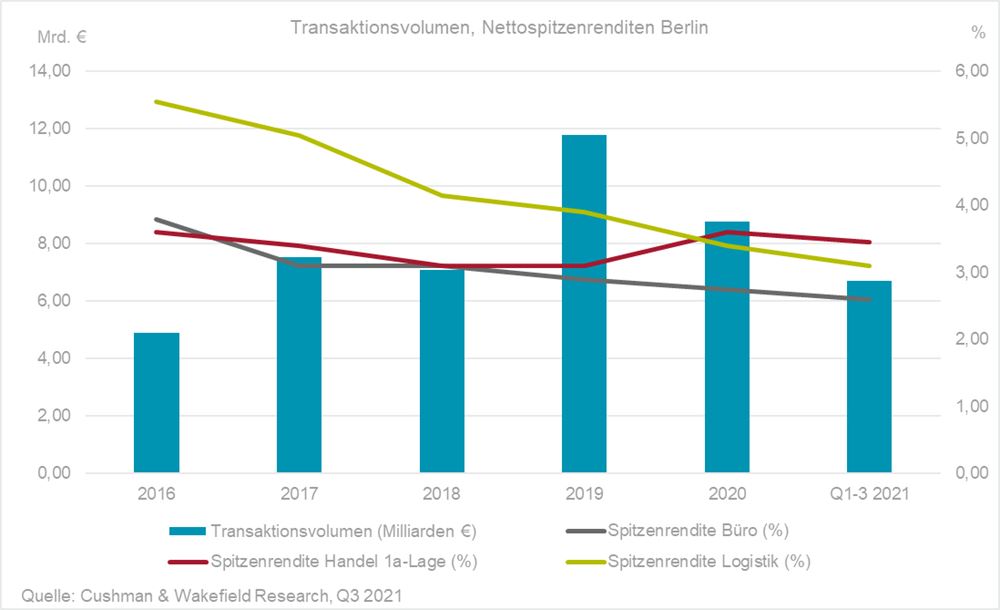 Prime logistics and light industrial properties are currently trading at a prime yield of 3.10 per cent. This is 55 basis points less than a year ago. A further fall in yields is expected in the next three months.

The prime yield for city centre commercial properties is quoted at 3.45 per cent at the end of the third quarter, 5 basis points below last year's level. C&W does not expect any further changes here in the remainder of the year.