Asia Pacific economy forecast to return to world-leading growth in 2022, maintaining into 2023

The Asia Pacific economy is set to rebound in 2022 and regain top position in the second half of the year with an expected 4.5% real average annual GDP, while growth in the other two major regions normalizes, according to Cushman & Wakefield’s latest report titled “Catch ’22 - Asia Pacific Commercial Real Estate Outlook 2022”.

“India is forecast to lead regional growth in 2022, averaging over 9% for the year, in large part due to restrictions being lifted and a resultant leap in domestic consumption and production,” said Dr. Dominic Brown, Head of Insight & Analysis, Asia Pacific at Cushman & Wakefield. “Similarly, Singapore, Japan and South Korea are all forecast to experience above average growth in 2022 driven by strong demand for exports. We are also expecting rebound growth in Australia following the prolonged lockdowns in New South Wales and Victoria. In China, growth is expected to normalise after a particularly strong 2021.”

Hong Kong SAR, Indonesia and the Philippines run closer to the average growth rates of the 5-years prior to the pandemic. While they expect to experience an increase in domestic consumption, they are negatively impacted by closed international borders. Although these borders are likely to reopen through the course of the year, the strength of international flows remains uncertain.

Slower growth is expected in the remaining countries, with Vietnam, and to a lesser extent, Malaysia being the most exposed due to lack of international tourism, while Thailand continues to struggle to bring the virus under control. In China, growth is normalising after a particularly strong 2021, but it is also facing competitive headwinds from production ramping up elsewhere across the globe and a selection of localised issues. 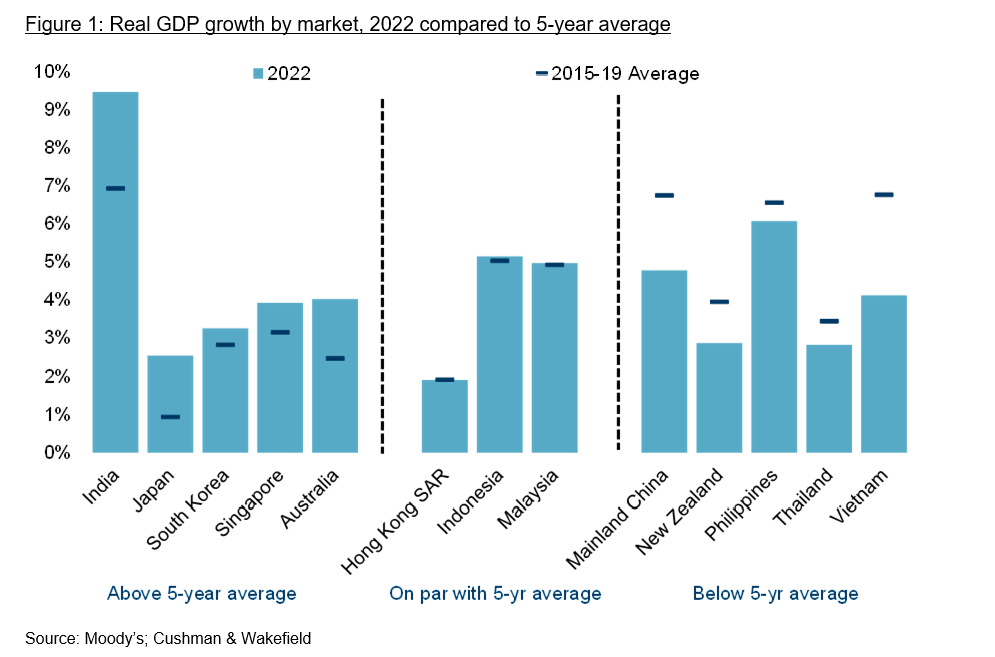 Although unemployment remains elevated across the region, levels in most markets are well below their respective pandemic peaks and forecast to sit at or below their respective five-year average over the year ahead. However, aggregate figures of unemployment hide finer details – the “K-shaped” recovery path revealed weakness in retail, tourism and service-oriented sectors compared to tight labour conditions in professional services, IT, finance and manufacturing. Furthermore, countries that are reliant on immigration to boost labour pools, such as Singapore and Australia, are more exposed to labour shortages at least until global migration flows regain momentum. As such, there is an increasing mismatch between required business skills and available labour force which has intensified the war for talent.

Beyond this, evidence from a global study1 shows that 41% of the workforce is considering changing jobs within the next 12 months - the so called “Great Resignation”. While this originated in the U.S., there is mounting evidence that it will also sweep through parts of Asia Pacific. Fundamentally the key message is that corporate occupiers should prioritise talent retention and attraction in the immediate term as well as enhancing productivity through investment in technology and real estate.

According to the Catch ’22 report, the Asia Pacific office market has shown remarkable resilience, being the only region to record consecutive quarters of positive net absorption since the onset of the pandemic. Although regional vacancy has edged upwards, it is only marginal and primarily driven by supply exceeding demand, which in turn has exerted only a modest downward pressure on rents.
The outlook for the region is similarly upbeat, with office demand for the full year in 2021 expected to reach 55 million square feet (msf). This is 77% above 2020 levels despite much of the region re-entering prolonged lockdowns as the Delta variant emerged, and this is also in no small part due to record demand in Tier 1 markets in mainland China.

Looking to 2022, demand is expected to increase further to 72 msf – reflective of a stronger recovery across the entire region – before returning to pre-pandemic levels of around 83msf in 2023. Although flexible working practices are likely to be more widely adopted across the region, their impact on demand is expected to be relatively muted as employee desire to work flexibly is lower in Asia Pacific than in the U.S. and Europe. Looking ahead, projected employment growth and gradual return to office - is likely to offset the underlying headwind from remote working. Although the regional vacancy level is forecast to increase to 18% in 2023, this disguises the fact that many markets across the region are entering a period of restrained supply over the next two years. Rather, the regional figure is heavily influenced by the Indian markets which account for 50% of the increase in vacancy to 2023.

At the sub-regional level, office demand is expected to pick up across most markets in 2022. Furthermore, many are forecast to receive below average amounts of new supply. With demand rebounding and comparatively muted supply, rents are now forecast to reach trough in late 2021 through to early 2022, approximately 12 months earlier than envisaged at the start of this year. Singapore, Seoul, Bengaluru and Pune have the strongest rent growth outlook.

In Seoul, vacancy has been compressed as IT companies aggressively expanded their offices with rapid growth during the pandemic. Demand is on the rise with the gradual return to office and the increase of tenants’ movements. Seoul is forecast to be in short office due to the lack of large-scale supply scheduled by the end of 2023, and rents are expected to increase accordingly.

Investment outlook: On track to set another new record in 2022

Although the investment market has not been immune to the negative impacts of the pandemic, it has also been comparatively quick to rebound. Investment volumes in 2022 are forecast to match record levels seen in 2019 at around USD180bn. Key drivers include: still ultra-low interest rates despite modest increases in the past year, real estate as an inflation hedge, record amount of dry-powder and an intensified focus on capital deployment by investors.

While we expect the investment market to remain highly active, a greater focus on industrial assets may dampen average deal size, hence greater transaction activity may not result in higher overall volume. On the upside, total volume may exceed the USD180bn forecast should sufficient high-quality assets or large portfolios be brought to market. 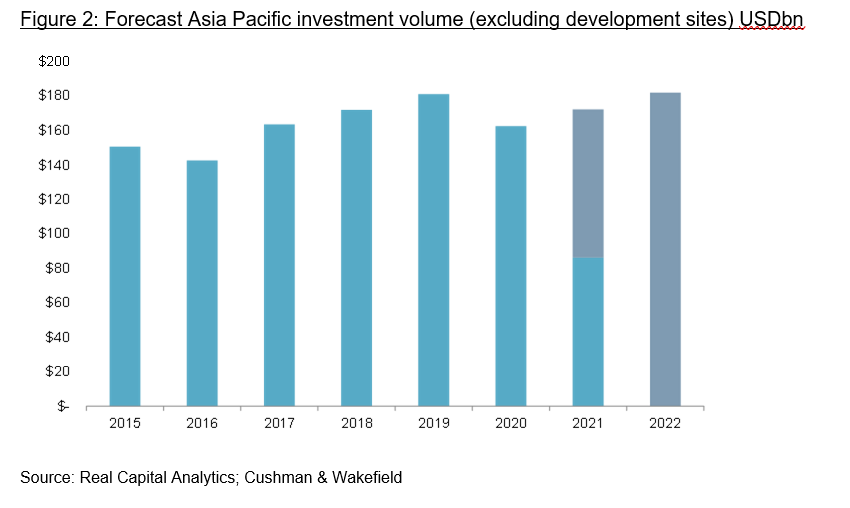 Emerging asset classes such as data centres, multifamily and life sciences have also gained traction among investors seeking higher yields and/or lower volatility. All have strong growth outlook prospects and offer good diversification benefits, however in terms of total investment volume they remain somewhat niche and so provide limited opportunities to diversify capital efficiently. Nevertheless, these asset classes are expected to be increasingly sought-after by the investor community.

The Korean Investment market has been seeing rapid growth over the past two years and the transaction volume of office and logistics center has set new highs year after year. The growth is due to the stable returns as well as sufficient liquidity, and investor interest continued especially in office market as the impact of the pandemic was less significant compared to other countries. Although demand in the Korean market is still high, the volume may be slightly adjusted in 2022 with the limited number of high-quality assets remaining in the market. 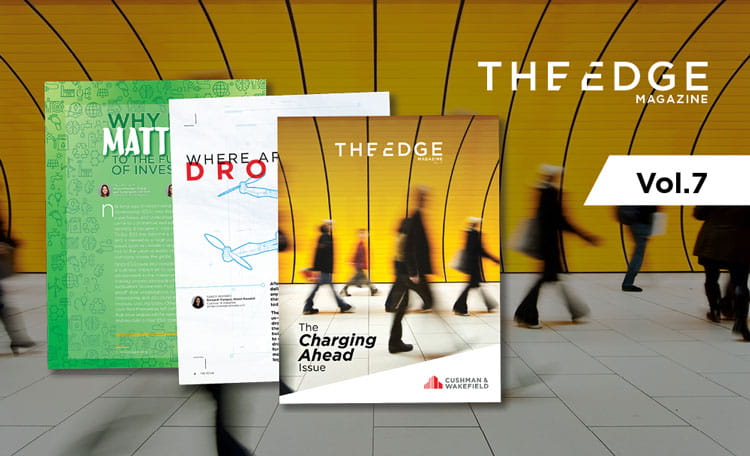 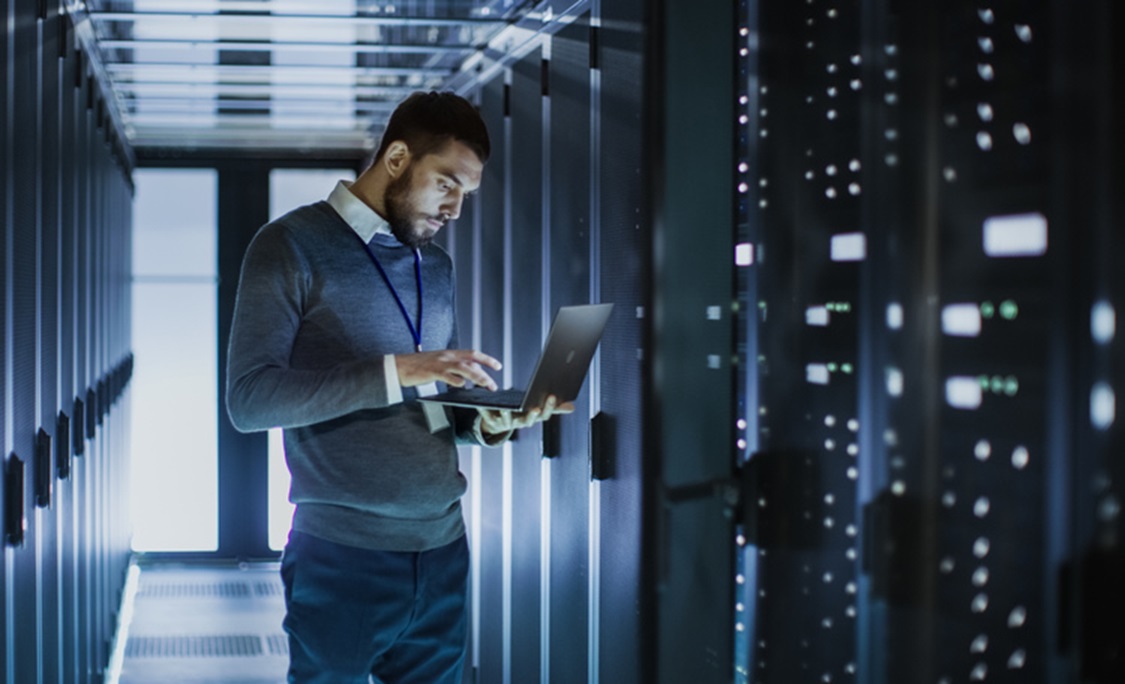 Data Centers, once an afterthought for global enterprises, are now a cornerstone of the information economy, and $100 billion has poured into the asset class over the past decade, according to Cushman & Wakefield’s Global Data Center Market Comparison.

17/01/2020
Your privacy matters to us
With your permission we and our partners would like to use cookies in order to access and record information and process personal data, such as unique identifiers and standard information sent by a device to ensure our website performs as expected, to develop and improve our products, and for advertising and insight purposes.