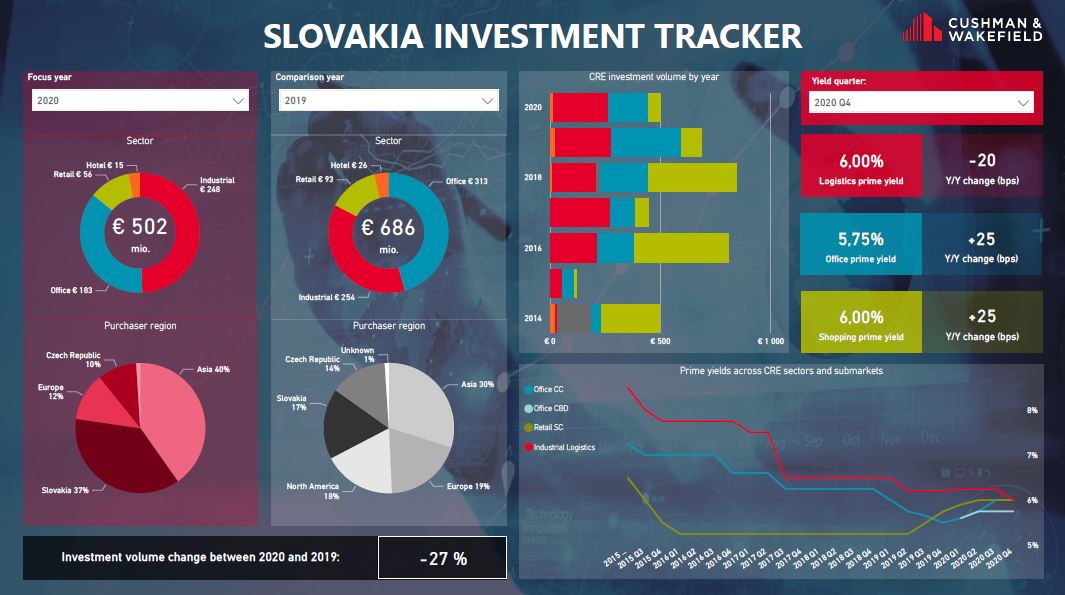 The total volume of commercial real estate transactions in Slovakia in 2020 amounted to EUR 502 million. This is a 27% decrease compared to the previous year, which is due to increased investor caution and, in part, a reduced appetite for retail assets due to uncertainty about the impact of the pandemic on their future development. We record several transactions started in the second half of the year, which did not manage to close by the end of the year. Almost three quarters of the transactions were carried out in the Bratislava region, followed by the Trnava region with approximately a 9% share of investment activity in the country.


More than 18% of the investment volume were intra-group transactions, i.e. transactions between entities belonging to a common corporate group. Industrial real estate recorded an increased volume of international portfolio transactions.

Cushman & Wakefield and its investment team, which is part of a strong Central European platform, have provided advisory services to buyers or sellers on up to 48% of the total volume of all transactions this year. This is a significant increase of 26 percentage points compared to last year.

As much as 49% of the volume of transactions was recorded in the industrial real estate sector, which represents a significant increase compared to an average of 37% between 2016 and 2019. Approximately 37% of the total investment belonged to office real estate (compared to 29% between 2016 and 2019) and only about 11% of the total investment activity was carried out in the retail sector. The remaining 3% of investments belonged to the hospitality sector. As much as 90% of this year's property transactions were closed in the first half of the year.

The largest completed transaction in Slovakia in 2020 was the sale of the Goodman industrial park portfolio in Senec and Košice to the Singaporean GLP fund with global operations, which now ranks fifth among industrial property owners in Slovakia with a total of 167,000 square meters of leasable area. The fund thus joined the five most important companies leasing industrial property, including Prologis, CTP, P3 and the Chinese CNIC. Cushman & Wakefield acted as an advisor to GLP on the buy-side of this transaction, which also covered properties in Poland, Czech Republic and Hungary.

The industrial sector is experiencing a surge in foreign demand, which is currently limited only by the supply of modern, well-located properties that have not yet been sold in previous years. Proof of this is the sale of the Palmira Senec logistics park, which was sold by Palmira Capital Partners / Apollo Global Management into the hands of the Singaporean sovereign fund GIC and represents approximately 127,000 square meters of leasable area. These properties are now managed by P3, which is currently the third biggest industrial player in Slovakia by the volume of areas managed.

The Czech fund REICO, which bought two warehouses in Sereď in the first quarter from the Russian developer PNK Group, also strengthened its position on the Slovak logistics market. The warehouses offer a total of approximately 44,000 square meters and have direct access to the R1 expressway, which feeds into the D1 motorway.

The total volume of transactions in the industrial sector reached over EUR 248 million in 2020, most of which took the form of portfolio transactions.

Significant office transactions this year include the sale of the ROSUM building belonging to Penta Real Estate with a total leasable area of more than 22,000 square meters to the German private fund ECE. The building was built in 2016 at the intersection of major city roads on Bajkalská and Ružinovská streets and has a green LEED Gold certification.

Significant office transactions took place not only in Bratislava, as evidenced by the purchase of the BCT-1 business centre (over 17,000 sq m) in Košice by the Slovak group Occam Real Estate from the developer Penta Real Estate.

The office sector reached a total volume of transactions of 183 million euros this year, and we expect an increase in investor interest in this segment after the completion of several upcoming projects after their successful lease. At the same time, we also record several larger, pending transactions in this sector at various stages of the transaction process.

The retail market was hit hardest this year by a decline in mobility and a consequent decline in turnovers of shopping centres. The biggest drop in sales was recorded by shopping centres near business centres due to the higher rate of work from home. Retail transactions in 2020 amounted to only around 56 million euros, mostly transactions from the first quarter, which were negotiated in 2019. These include the sale of the Dubeň shopping centre in Žilina, which is now owned by Mirage, a company belonging to George Trabelssie.

As for the source of capital, the largest share of total investments in 2020 had Asian investors (40%), followed by Slovak (37%), European - with the exception of the Czech Republic and Slovakia (12%) and Czech investors (10%). The highest increase in recent years clearly belongs to the capital from Asia, but this year Slovak investors also had an above-average share in investments. They dominated mainly in individual transactions of regional significance, while large foreign institutional investors increasingly make purchases in the form of international portfolio transactions.

We record a narrowing of the prime yield for the most attractive real estate in the industrial sector to 6.00%, which reflects the growing investor demand for this type of asset and high liquidity and organic growth of the sector strengthened by the presence of more car manufacturers and their suppliers, as well as growing internet sales.

Office real estate recorded a slight increase in the prime yield by 0.25 percentage point to 5.75% during the year. This is the result of a slight increase in perceived risk on the part of investors, which stems from the growing saturation of offices in the capital during the period, together with the increasing rate of work from home, which may affect the demand for offices. Office properties with long leases and creditworthy tenants can still attract investors at a yield rate below 5.50%.

Investors in the retail sector are also cautious, with an achievable shopping centre yield of 6.00%, which is now on par with industrial real estate yields for the first time. The increasing shopping centre prime yield is a positive signal for investors looking for value-add acquisitions of retail assets, but after the centres' performance fell in 2020, owners' willingness to sell is generally low and the sector is waiting to stabilize in the coming years.

"The slowdown in the investment market in the first half of the year and the suspension of some transactions resulted from the unprecedented nation-wide lockdown and the subsequent discrepancies in asset valuations. This was due to the uncertainty as to whether the prices agreed before the lockdown correctly reflected the market risk after the outbreak of the pandemic. However, despite initial uncertainty, we see a start to a strong year in 2021, including investment in retail, which should be supported by the successful implementation of measures to combat the coronavirus pandemic and the availability of vaccination. The Slovak investment team in Cushman & Wakefield continues to work on several ongoing transactions," says Marián Fridrich, Managing Partner at Cushman & Wakefield Slovakia. 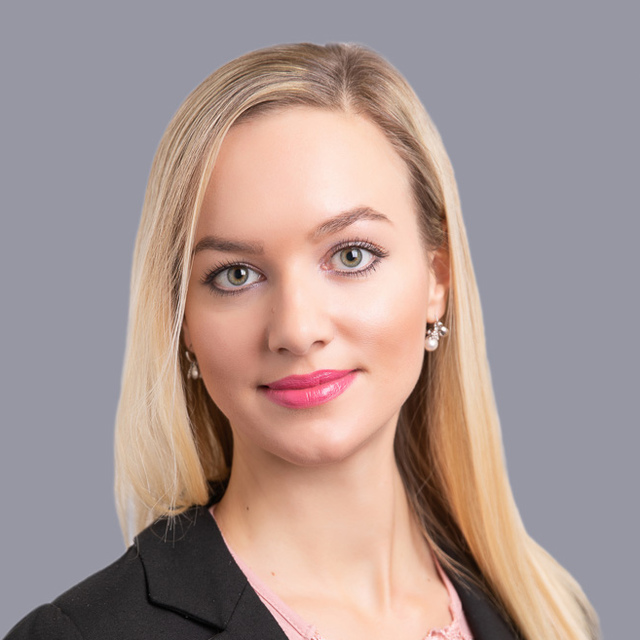 A regular update on the commercial real estate market in Slovakia.
Lukas Brath • 14/09/2022

Cushman & Wakefield MarketBeat reports analyse quarterly commercial real estate activity in the CEE region (Czech Republic, Hungary, Poland, Romania, and Slovakia) across office, retail, industrial and hospitality real estate sectors including supply, demand and pricing trends at the market and submarket levels.
Marie Baláčová • 09/09/2022
Your privacy matters to us
With your permission we and our partners would like to use cookies in order to access and record information and process personal data, such as unique identifiers and standard information sent by a device to ensure our website performs as expected, to develop and improve our products, and for advertising and insight purposes.