Millennials and COVID-19: The unlucky generation

Millennials, those born from 1981 to 1996, have been given many monikers in their comparatively short lives, one of them being “the unlucky generation.” Having attended school during the Dot.com crash, they came of age during the Great Financial Crisis (GFC), and now find themselves enduring the worst recession in a century at a time when they are trying to build their careers, as well as focus on their personal lives.

Wage Scares to Cut Deeper
Looking back to the GFC, the leading edge of the Millennial cohort was just graduating and ready to embark on their careers. It’s tough enough securing a first job during a recession, something that Generation Z (born 1997-2012) are currently finding out, but the effects go well beyond the ability to secure a job. Extensive historical analysis has shown that the impacts are more enduring than a rise in unemployment and persist well after economic recovery through a process known as “wage scarring.” More recent analysis in this genre shows that Millennials experienced the largest earnings loss, of up to 13 percent, and took the longest to recover1. The lower rate of pay has a greater bearing at the start of your career due to compounding, requiring above-average wage growth in order to overcome the negative effects.

Fast forward to 2020 and the trailing edge of the Millennial cohort, at 24 years of age, are similarly facing economic difficulties at the start of their career. Studies have shown that Millennials are more likely to have been laid-off, furloughed or taken a pay cut2. Combine this with student debts3, other personal loans and potentially a mortgage, and it means Millennials are far more likely to come out of the pandemic in a more precarious financial position than older generations. Expect their spending potential to be reined in for years to come.

Acute Challenges Working Remotely
Not only has the pandemic wrought economic consequences, but it has also dramatically and likely enduringly, altered how and where people work. As workplaces have temporarily shuttered across the world, many have equated the period of enforced working from home (WFH) as a move to greater flexibility, but this is not the case. Rather, one dominant work location (the office) has been replaced with another (the home). It is not so much “working from home” but “working at home.” This has presented challenges to all, but most acutely to Millennials.

At the headline level, the Millennial experience is very similar to that of other generations. The ability to collaborate and focus is high, but has come at the expense of personal connection to colleagues, connection to company culture and the ability to learn.⁴ Scratching beneath the surface, though, we see that Millennials are feeling these challenges disproportionately.

The Ability to Focus is a Challenge
While 71 percent of Millennials said they could focus when they need to be productive, this was lower than other generations, which averaged 77 percent. Unpacking this across other variables, we see the founding reasons why this is so. Millennials, along with their younger counterparts

Generation Z were much more likely than older generations to experience difficulties in the WFH environment with nearly 70 percent reporting a challenge. While sub-par connectivity was problematic for all, Millennials have had to cope with the additional triple-whammy of household duties (28 percent), caregiver responsibilities (25 percent) and inadequate home workspace (22 percent)—ranking in the top two generations to report each challenge.

Millennials were much more likely to report a lack of space for focused work and the ability to minimize distractions—both of which were 11 percentage points below the average of other generations. This no doubt reflects their stage in the lifecycle. Older Millennials are having to simultaneously juggle work and parental duties—the average age at birth of first child across the Organization for Economic Cooperation and Development (OECD) countries is almost 30 years of age.5 Combining this with their dwelling types, which are more likely to be smaller units/apartments, it is not surprising that their ability to focus is comparatively lower. And it’s not much better for the other end of the Millennial cohort who are predominantly still living with their parents.

Interestingly, the divide between generations is most acute in the Americas and least in Asia Pacific. The nature of higher density living across major Asian cities means that these challenges are felt across all generations and not just Millennials.

Connections Have Been Lost
It is widely appreciated that enforced WFH has eroded everybody’s connection to their colleagues and to their company culture. However, again, these issues are felt more acutely by Millennials. Millennials are at an age when the workplace is the crucible of where they can establish connections within their company and industry to create solid foundations for their career. In contrast, Generation X (born 1965-1980) and Baby Boomers (born 1946-64) are much more likely to have already forged their industry connections and are not as dependent on their company to provide social interaction. This is not to say that they don’t make meaningful connections at work, but that those connections are comparatively more important to Millennials.

It has been shown across numerous studies that while these connections can be maintained in a virtual environment, albeit with some erosion of their strength, they are much harder to be established remotely. It for these reasons that bond scores (connection to colleagues) are up to three percentage points lower for Millennials compared to Generation X and Baby Boomers respectively. More recent data suggests this gap is widening.

Connection to company culture is more directly correlated to the length of tenure at a company rather than someone’s age, though one can be a broad proxy for the other. Again, we see a lower connection to culture for Millennials than older generations. The implication though is that this cultural capital is likely to be eroded more quickly for Millennials than older generations, which then could lead to lower engagement and lower retention rates.

Low Well-Being Hurts Fulfillment
These factors are significant detractors for Millennials, which then have further ramifications. Lower ability to focus results in the need to spend more hours on a task, which has a cascading effect:

Together these issues manifest in a lack of ability to do their best work and in lower overall fulfillment. It is clear from these results that remote work is not the same as flexible, or agile work, and Millennials are struggling the most as victims of their stage in the life course. Once again, the unlucky generation has been overly burdened by events outside of their control.

A Future Based on Flexibility, Loyalty and Inclusion
While the above paints a comparatively bleak picture of the Millennial experience so far during COVID-19, there are reasons for optimism and lessons for current and future employers. The crux is that despite the unprecedented nature of the current economic environment, Millennials remain more committed than ever to their core beliefs.

The fact that they have been so deeply affected by the pandemic has served to reinforce their views on diversity, inclusion and equity6. The downturn has forced them to focus much more on their longer-term financial future, as well as being more sympathetic to the needs of others.

They also remain deeply committed to their desire for greater flexibility at work. While enforced working from home hasn’t given them the flexibility they have desired so far, it has proven that they can be trusted to work remotely and that the job still gets done.

Finally, the pace of change in society has shown Millennials what can be done when governments and private enterprise come together to achieve a common goal. As such the pandemic, rather than dampen their views, has reinforced that rapid change is achievable and now not only do they want to play their part from the front, but also expect everyone to keep up.

Millennials have been more adversely affected by the pandemic than other generations and because of this they will become an even more powerful change agent. The key now is for employers to harness that drive and help Millennials propel themselves out of this recession. Doing so will reap benefits well beyond the near term. 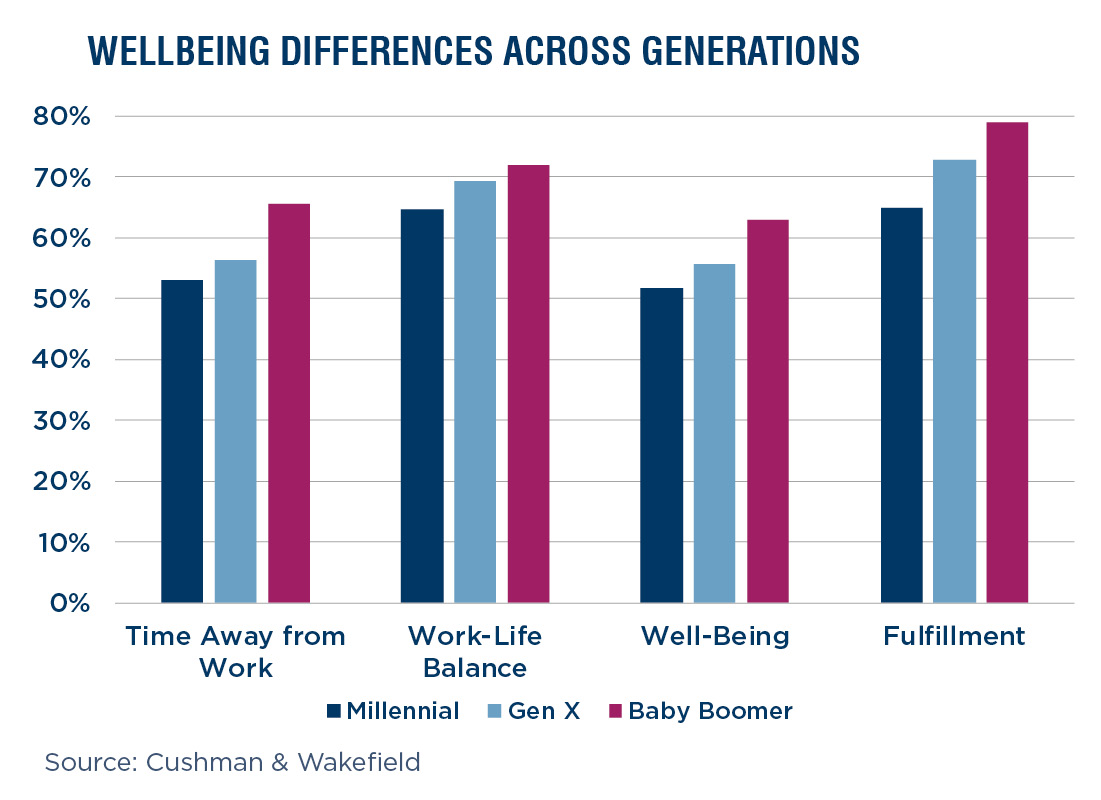 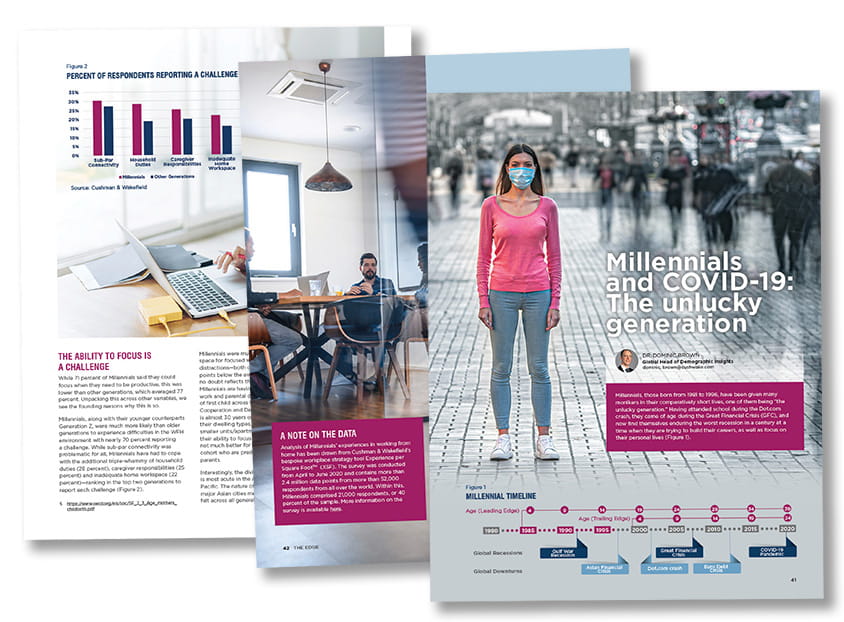 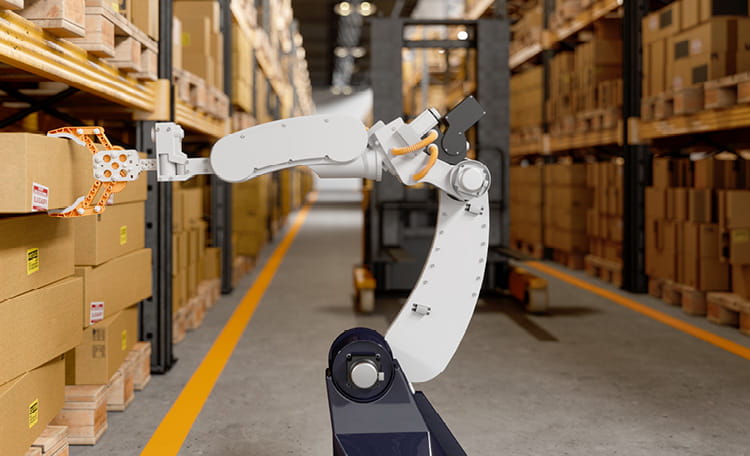 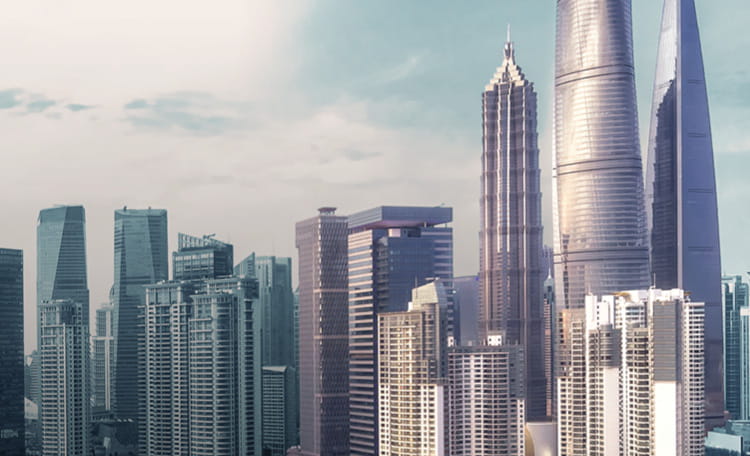 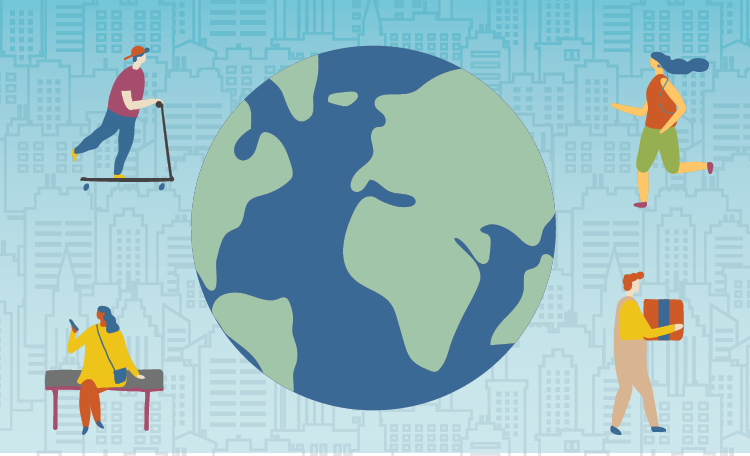 Do amenities still matter in a post-COVID-19 world?

MORE OPTIONS
Acceptez et fermez
These cookies ensure that our website performs as expected,for example website traffic load is balanced across our servers to prevent our website from crashing during particularly high usage.
These cookies allow our website to remember choices you make (such as your user name, language or the region you are in) and provide enhanced features. These cookies do not gather any information about you that could be used for advertising or remember where you have been on the internet.
These cookies allow us to work with our marketing partners to understand which ads or links you have clicked on before arriving on our website or to help us make our advertising more relevant to you.
COOKIE PREFERENCES
AGREE ALL
REJECT ALL
SAVE SETTINGS
ESSENTIAL
Non Essential
MARKETING