Frankfurt office market: More momentum expected in the second half of the year

International real estate consultancy firm Cushman & Wakefield reports take-up of 81,700 square metres in the Frankfurt office market in the first quarter of 2021. This means that the first three months were better than in the previous year, when take-up of around 61,000 square metres was the lowest annual figure since 2006. Compared to the five- and ten-year first quarter averages, the current level is 26 percent and 19 percent lower, respectively.

Regarding the current situation, Pierre Nolte, Head of Office Letting Frankfurt at Cushman & Wakefield, nevertheless assesses the market situation positively: "One can definitely be satisfied with the result. Many tenants have used the last few months to intensively deal with their workplace concepts and the resulting future space requirements. Accordingly, we are now entering a phase in which these strategies are being implemented. This will certainly bring more sublet space onto the market. However, we will also see significantly more active users in terms of lettings and lease extensions. This also fits with the noticeable increase in large-scale area searches that are active in the market. So 2021 will not set a negative record." 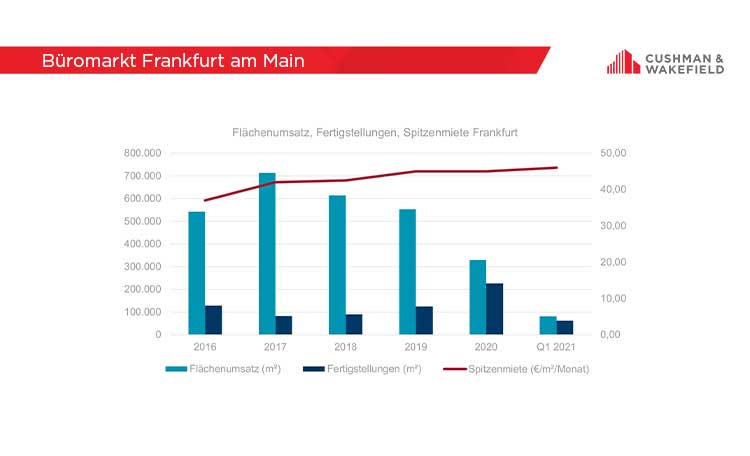 Supply of space available for immediate occupancy has increased significantly
The absolute vacancy rate rose by 10 per cent to around 914,000 square metres compared to a year ago. The vacancy rate in the market area is now 7.8 per cent, compared to 7.0 per cent at the beginning of 2020. This largely reflects the lower level of lettings last year compared to previous years. In addition, 62,500 square metres of new office space were completed to the end of March, of which a good 23,000 square metres remained unlet on completion, thus increasing the amount of total stock available for immediate occupancy.

A further 145,000 square metres is under construction with completion planned for the end of 2021. 80 per cent of this space has already been let to occupiers. Of the 210,000 square metres scheduled to be ready for occupancy in 2022, 60 per cent is still available to lease.

Even in the prime city centre Banking District location, the amount of space available at short notice has risen slightly, from 3.5 per cent at the end of Q1 2020 to 4.9 per cent currently. A not inconsiderable proportion of this is residual space in new buildings or core refurbishments.

Average rent down, prime rent confirms high level
The sustainable prime office rent achievable in the Frankfurt market currently stands at 46.00 euros per square metre and month. The weighted average rent for all new leases concluded in the last twelve months is 22.60 euros per square metre and month. Compared to the end of 2020, it has fallen by one euro. In the first quarter of 2021, there were no lettings in the prime rent range, and the proportion of lettings in development projects was also lower than in the previous quarters at 5,500 square metres. Prime and average rents are both expected to maintain their current levels until the end of 2021. Pierre Nolte: "The trend of improving location and building quality when moving remains uninterrupted. Accordingly, we continue to see high demand for premium space in prime locations."

There have been two transactions in the three-digit-million-euro range so far: The Gesellschaft für Internationale Zusammenarbeit acquired an office project from Phoenix in Eschborn for around 220 million euros in the course of expanding its office space and Demire acquired a stake in the Cielo office property in City-West from RFR; the total value of the property is around 270 million euros. Richard Tucker, branch manager and head of Cushman & Wakefield's Frankfurt investment team, believes that the first quarter was a subdued start to a good year: "There is not a lack of interest on the capital side, but a lack of ready investment product due to deferred lease conclusions. Activity in the office investment market, as in the leasing market, will increase over the course of the year. The more new leases signed, the more confident investors will become."

The net initial yield for prime properties in very good central locations has remained unchanged at 2.75 per cent since December 2019, and at 4.45 per cent in non-central locations. This is not expected to change substantially before the end of 2021.