Munich commercial properties with a volume of EUR 883 million were bought and sold in Q3 2021. This brings Munich’s cumulative transaction volume in the first three quarters of 2021 to around EUR 3.9 billion, reports real estate consultancy firm Cushman & Wakefield. Compared to the same period last year, this corresponds to an increase of 3.8 per cent.

Office properties remain the strongest asset class
The decisive factor for the result in the 3rd quarter were three large-volume sales above the EUR 100 million mark. The three deals are office properties, including the Quadriga in Unterföhring and the Messe Campus München Riem. Together they account for almost 44 per cent of the recorded transaction volume. In the year to date, the size category above EUR 100 million has accounted for 58 per cent of total transaction volume - making it the main driver of the Munich investment market. Office properties continue to be the clear focus of investors and, with a share of 82 per cent of the commercial transaction volume, are the dominant use-type. Hotel properties follow well behind in second place with around six per cent. Transaction volume for logistics and industrial properties played a subordinate role in Munich’s investment market with a share of three per cent. The retail contribution is than one per cent.

Jan Isaakson, Head of Capital Markets Munich at Cushman & Wakefield, explains: "The confidence of many office investors has returned this quarter. Despite the various different back-to-office scenarios and the open question about the future space requirements of companies, investors agree that the office will continue to play a central role in the future. Another important issue for investors is ESG. Many investors require ESG compliance for potential acquisitions. Overall, our outlook for the coming months is positive. Due to the currently increasing pitch activity, it may be assumed that there could be a year-end spurt in sales in Munich and that a transaction volume of 5.0 billion euros or more is realisable. Further sales should then also lead to a strong transaction volume in Q1 2022."

Low-risk investments in focus
73 per cent of the commercial real estate investment volume in the first nine months was attributable to low-risk properties in the Core and Core+ risk classes. Opportunistic and value-add properties played only a subordinate role in transactions in the Munich investment market so far this year. The participation of foreign capital in the first three quarters was 43 per cent and thus significantly above the previous year’s figure of 31 per cent.

Prime yields continue to compress
The prime yield for core office properties in very good city-centre locations was 2.50 per cent at the end of the third quarter, ten basis points below the value twelve months ago. Due to the high demand, slight yield compression is expected to the end of the year. In non-central locations, the prime yield is 3.30 per cent, which will probably also move in by the end of 2021. 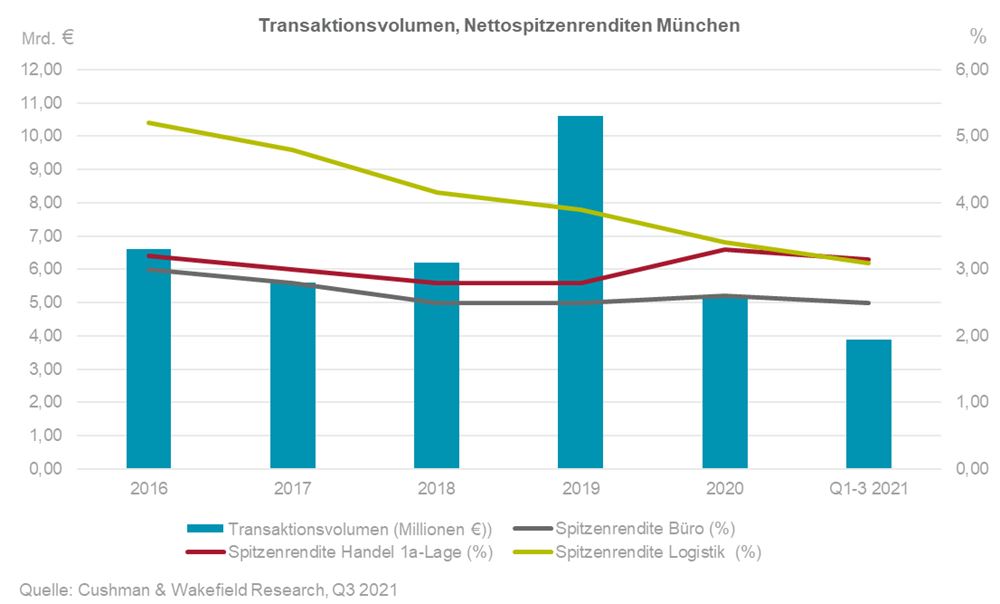 The prime yield for logistics properties is currently 3.10 per cent, 55 basis points lower than at the same point last year and reflecting the high competition for properties of this type. Further yield compression is to be expected.

Likewise, slight compression in prime yields for city centre commercial properties are again being recorded. The prime yield currently stands at 3.15 per cent having compressed by five basis points over the past twelve months.