With take-up of 442,000 sq m, the previous year's result for the Frankfurt office letting market was exceeded by 34 percent. This was mainly due to a strong 4th quarter, which at 188,000 sq m saw more than twice as much revenue as in the previous quarter. In the second year of the pandemic take-up fell short of the 10-year average by only a moderate 10 percent.

A number of major deals outside the city centre contributed to this positive result. With 59,200 sq m, Eschborn was the most active submarket, as it was in 2020. The Federal Institute for Economics and Export Control concluded the largest deal of the year by leasing over 21,000 sq m in the Eschborn Stock Exchange development project. The Niederrad submarket also experienced high level of take-up of space, at some 57,000 sq m. This was mainly due to large-scale lease conclusions such as Wordline’s lease for 15,000 sq m in Atricom.

Pierre Nolte, Head of Office Leasing Frankfurt at Cushman & Wakefield, explains:
"Many companies have now committed to a long-term real estate strategy for the post-Covid period. Therefore, in 2021, some large space searches that had been suspended due to the pandemic were resumed, which had a very positive effect on take-up. 16 deals over 5,000 sq m alone, contributing around 168,000 sq m to take-up are clear pointers to the increase in activity. In this size class, take-up increased by more than 50 percent compared to the previous year. We expect this momentum to continue in 2022. The ongoing centralisation of the banking sector is likely to lead to further major deals next year and ensure total market take-up is in a range between 450,000 and 500,000 sq m." 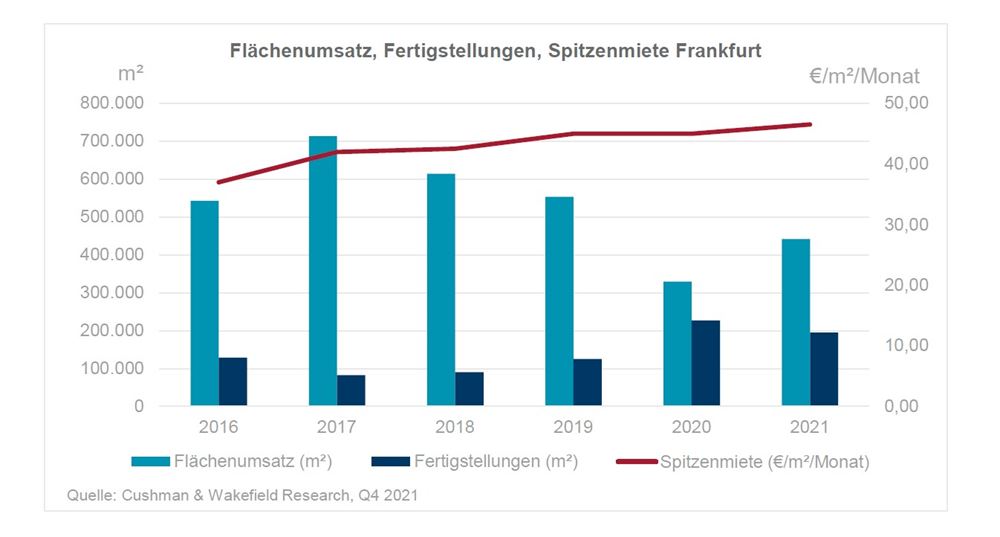 Vacancy rate rises slightly
Despite numerous lettings in existing buildings, the vacancy rate rose slightly in the 4th quarter. This is mainly due to large-scale space being offered to sublease by financial institutions. Overall, the vacancy rate (including subleasing space) at the end of the year was around 952,000 sq m, which corresponds to a rate of 8.1 percent (end of 2020: 7.4 percent). At almost 155,000 sq m, subleasing space accounted for around 16 percent of the space available at short notice. Significant increases in vacancy rates compared to the previous quarter were recorded in the City West and Europaviertel/Messe submarkets, where further space will also enter the market in 2022 through relocations or development completions.

Some development projects with delays
In 2021, around 195,000 sq m of new office space came into the market, of which around 75 percent was already occupied at the time of completion. This exceeded the ten-year average by more than a quarter. The next few years will also be characterised by a high level of construction activity. However, delays in some projects in 2022 will cause slight declines in completion volumes. For example, the recent of 210,000 sqm forecast for 2022 has now been adjusted downwards to around 141,000 sq m. The long-term pipeline also remains well filled: In 2021, the high-rise office developments Central Business Tower, Millennium Tower and Canyon were announced in the CBD and the adjacent submarkets among others. These projects demonstrate the developers' trust in Frankfurt as a business location.

Average rent falls slightly
The prime rent remained unchanged compared to the previous quarter at EUR 46.50/sq m per month. In the twelve-month period, the increase was 3.3 percent. At the end of 2021, the weighted average rent for all new leases in the last twelve months was EUR 23.20/sq m per month. Large lettings in the more favourable peripheral submarkets of the city led to a slight decline of EUR 0.40/sq m or 1.7 percent compared to the previous year.