The ongoing uncertainty caused by the pandemic and the shift towards more flexible working environments is delaying leasing decisions. Accordingly, the 2021 full-year result is still 11 percent below the five-year average and 3 percent below the ten-year average. For 2022 as a whole, Cushman & Wakefield expects take-up of 2.9 million sq m.

Berlin and Munich saw strongest office take-up – strong increase in number of large deals
Berlin achieved an extraordinarily strong quarterly result of around 320,000 sq m. This is due in particular to eight major deals, each involving more than 10,000 sq m of office space, including that of the Federal Ministry of Economics and Climate Protection in Chausseestrasse. Munich also achieved a high result, with 230,000 sq m of office take-up. These markets lead the full-year statistics. Hamburg (+38 percent) and Frankfurt (+34 percent) saw the highest growth rates over the year. Office take-up was boosted in all locations by large deals of over 10,000 sq m. While there were only 25 of these in 2020, a total of 41 deals of this size and above were registered in 2021. 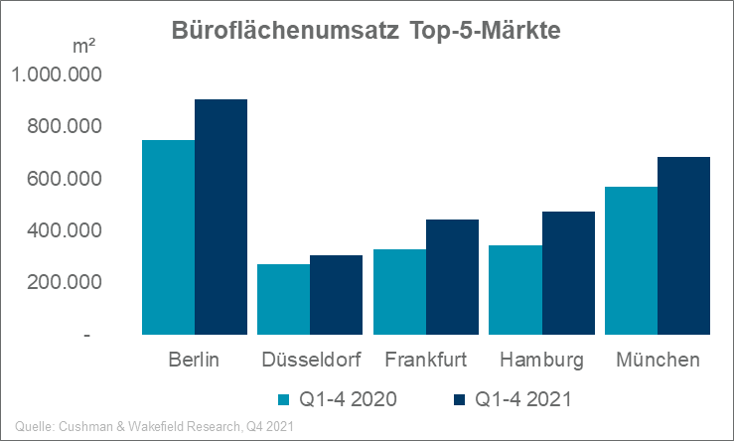 Vacancy increased in all top-5 markets 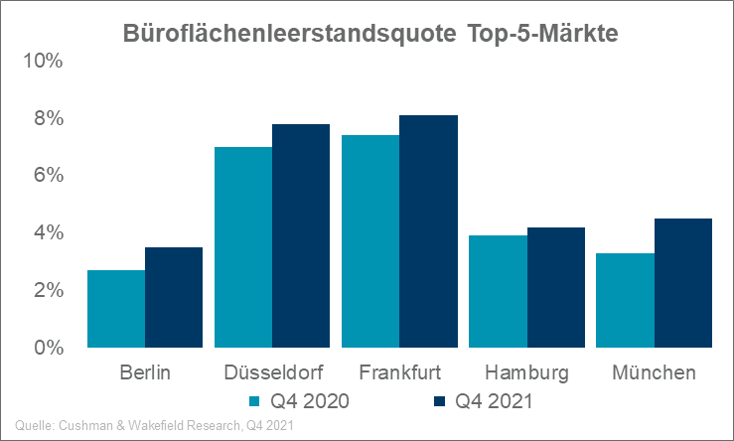 Highest completion volume since 2004
In 2021 as a whole, around 1.3 million sq m of new or refurbished office space was completed. This is 7 percent more than in the previous year, 53 percent above the ten-year average and the highest figure since 2004. 71 percent of the space was already let or owner-occupied on completion. By far the largest completion volume, 560,000 sq m, was in Berlin. Munich also saw a high level of space completed, at  250,000 sq m. At the end of 2021, 4.3 million sq m of office space is under construction in the top-5 markets. This is the highest figure of the last 20 years. Of this, 52 percent is already let or owner-occupied. The largest construction pipelines are in Berlin (1.77 million sq m) and Munich (1.38 million sq m).

Increase in prime rents in four of top-five markets
Prime rents rose over the course of the year in four of the top-five markets - between EUR 1/sq m in Hamburg and EUR 2.50/sq m in Munich. Frankfurt continues to have the highest prime rent at EUR 46.50/sq m. The prime rent index for the top-5 markets stood at 144.2 points (2010=100) at the end of 2021 having risen by 3.8 percent over the year. A further 1.8 percent increase is expected for 2022. Rent-free periods (so-called incentives) are flat in the prime central locations - in Berlin and Frankfurt they fell by an average of half a month's rent. In relation to a five-year lease, rent-free periods amount to 5.5 percent in all top-5 markets.

Flex sector in adjustment phase
After the boom in the flex office space sector from 2017 to 2019, with up to 260,000 sq m of take-up per year and a share of up to 8 percent, the pandemic has made caused a tough readjustment. In 2021, flex-office operators leased just under 40,000 sq m - around 1.5 percent of take-up. Expansion plans are on hold for most operators, some locations are being closed or plans are not being pursued. But there are exceptions: Some operators are expanding selectively. The offer of attractive, flexible office workplaces is, and remains, relevant for office users - in addition to the typical target groups, also for those who currently cannot, or do not want to, commit to a decision regarding their office situation for the next few years.