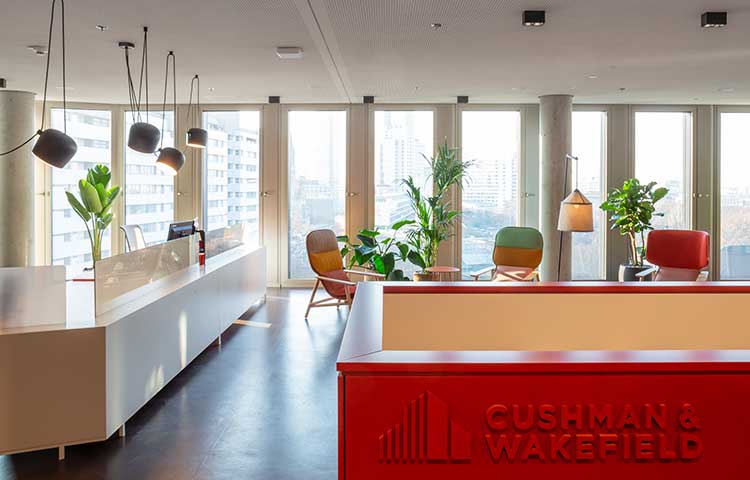 In our Berlin office, our interior design team has combined a functional “New Work” atmosphere with a sustainable urban jungle look. And thus created a modern working environment for creative exchange and external representation.

Ultimately, it is like this: Anyone who advises others on interior office design and refurbishes them must also be able to do the same for themselves. And we had the opportunity to show exactly that when our branch in the capital moved to the Berlin office high-rise "The Westlight" between Ku’damm, Bikini Berlin and the zoo - urban and yet with a green view.

It wasn't supposed to be a classic desk-to-desk office - it was primarily about more possibilities for creativity and spaces that create identity and represent it to the outside world. Since the corona pandemic at the latest, home office has been part of everyday work, the office has to fulfill new functions. It becomes a meeting point and project space for collaboration.

A lot of space was therefore required - for more exchange, but at the same time for more focus, concentration and further thinking in order to be able to receive and advise customers appropriately. A branch office as a business card, as an asset that attracts and can keep young talent. 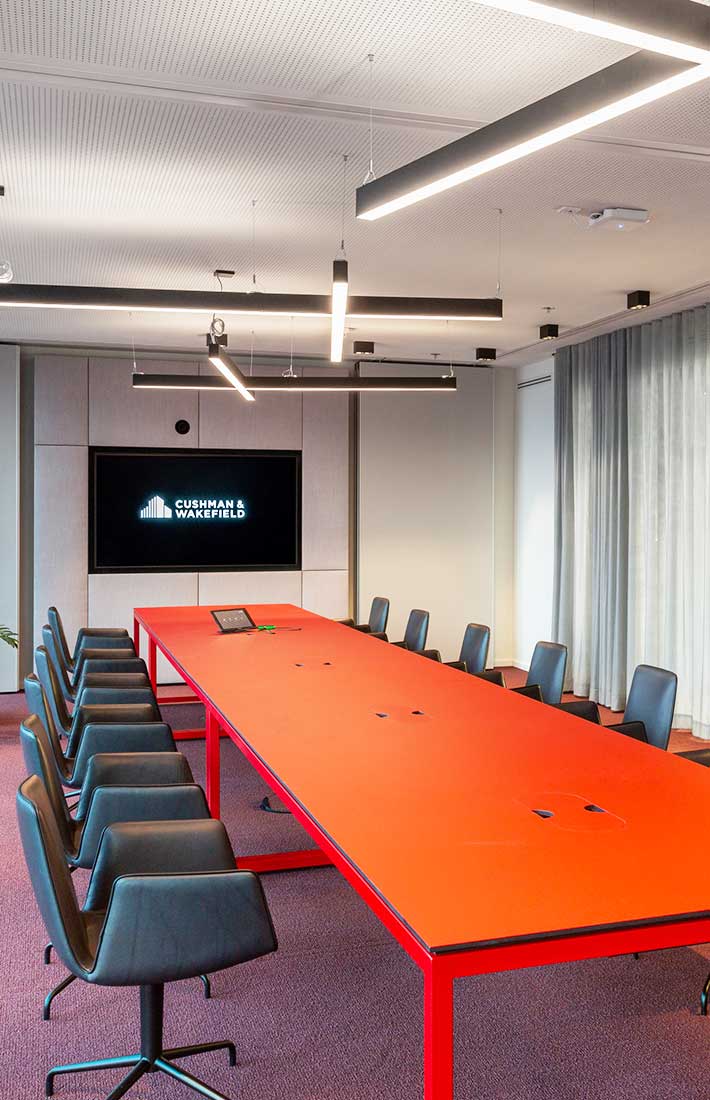 Our in-house interior design team was responsible for the design of the 1,800 sqm office space. That had a completely free hand for its own conceptions and ideas with a view to the objective. And - inspired by the location and the direct view of the animal enclosures of the Berlin zoo - the themes of "nature and wild life" were chosen as the design guideline and consistently followed during the redesign.

So it is not surprising that you can see motifs of monkeys, elephants and giraffes everywhere along the walls, exercising and relaxing on famous Berlin landmark properties. Sometimes playful, sometimes classy, the urban jungle concept runs through all areas. Exudes a feel-good atmosphere and nonchalance. And is evident in natural materials such as the floorboards made of local ash through to the meeting rooms that are named Bao Bao, Knautschke or Knut - all of them animal celebrities from the immediate vicinity. In addition, green plant shelves, which look so casual, as if someone were filling or watering them every now and then in passing, enliven the areas. They can be moved and thus change the room structure quite spontaneously.

An important guideline in the implementation was also to combine striking, bold design with the functional world of work in a very practical way. That is why the interior design team developed its own creations for many areas, which are precisely "designed" to meet our needs, such as the red tables in the large meeting rooms, which can be adapted to different room sizes and discussion constellations. Incidentally, these were then made by craftsmen from Berlin - something that was at the top of the list when building an office. Just like sustainable materials and a healthy office. 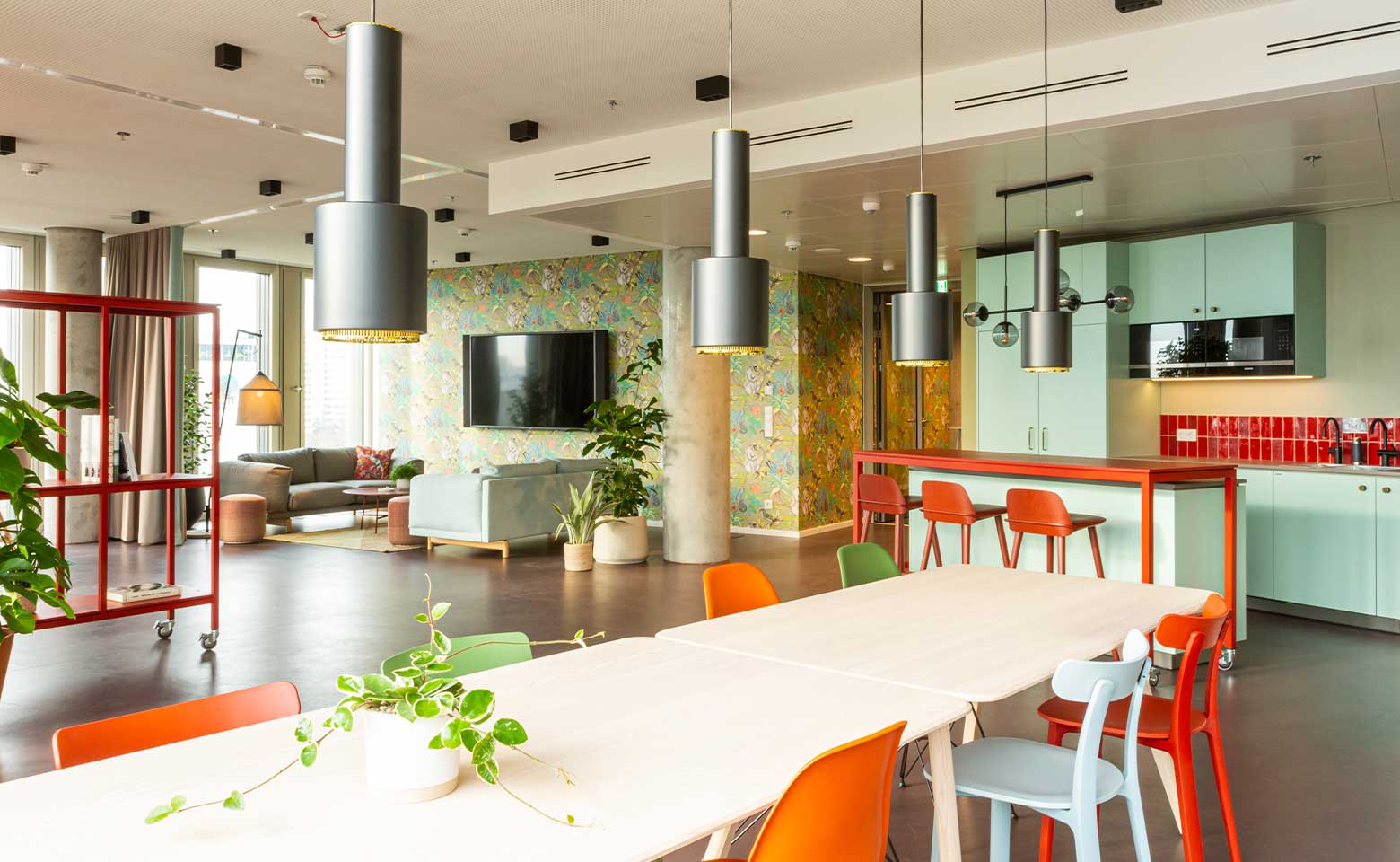 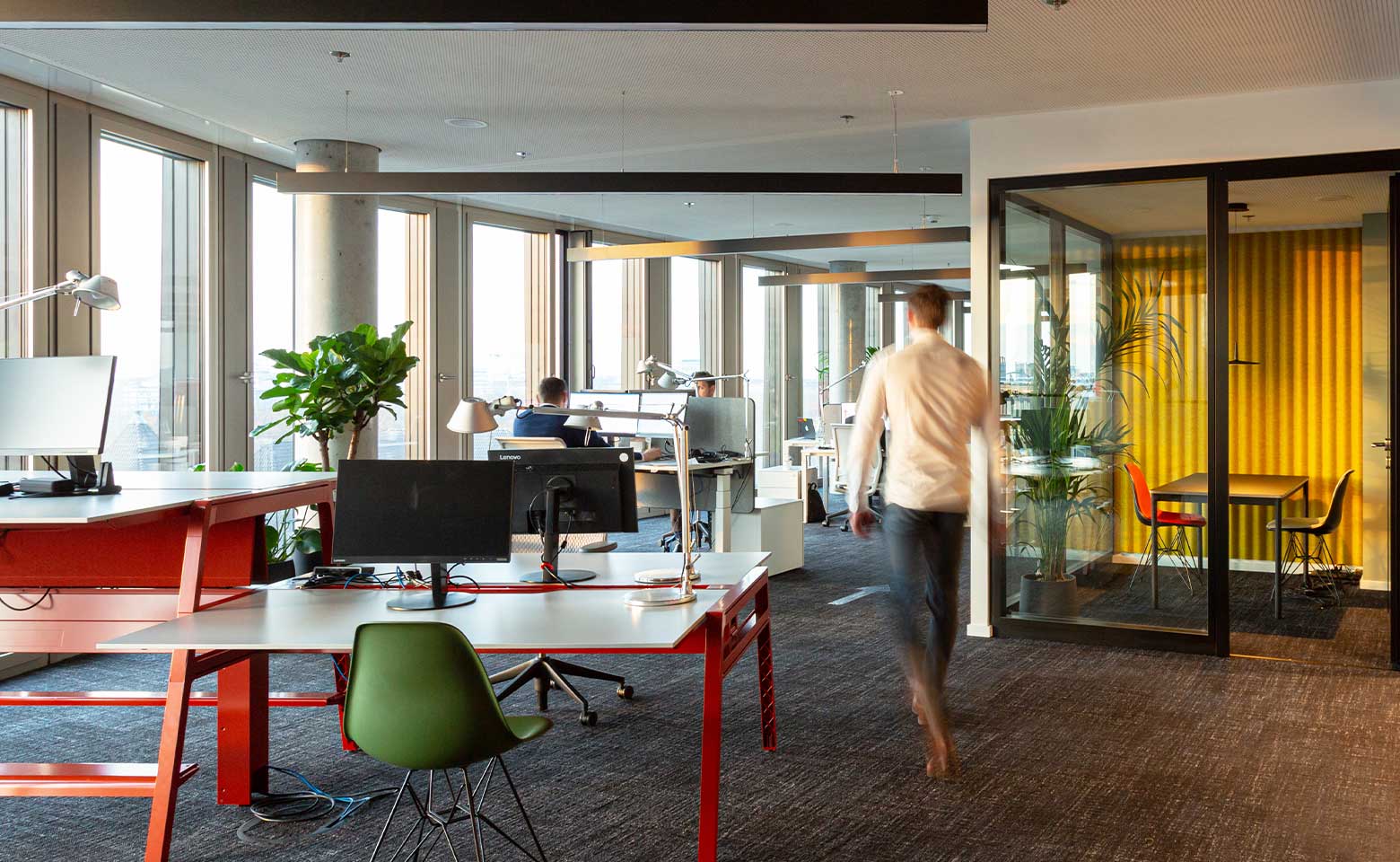 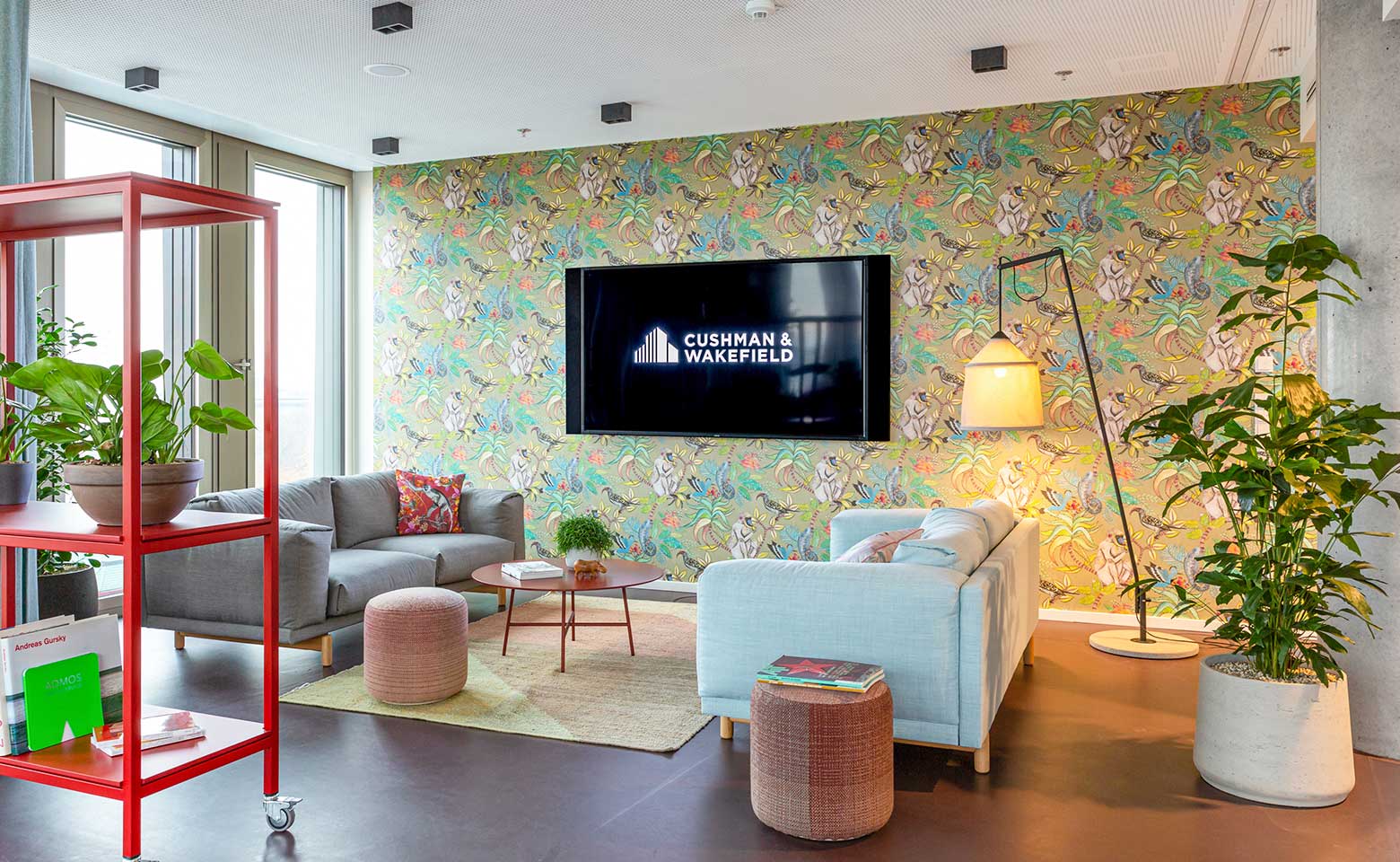 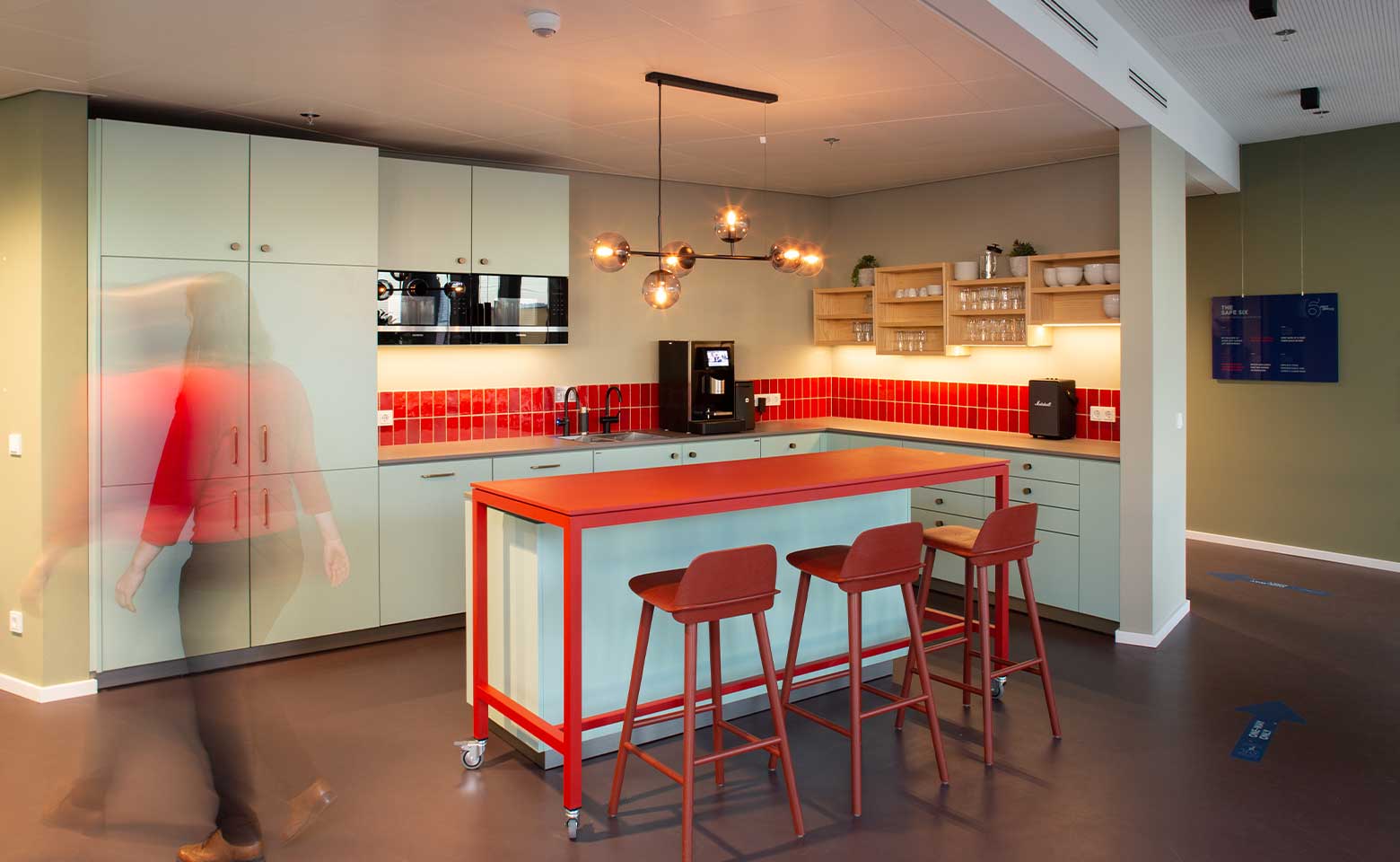 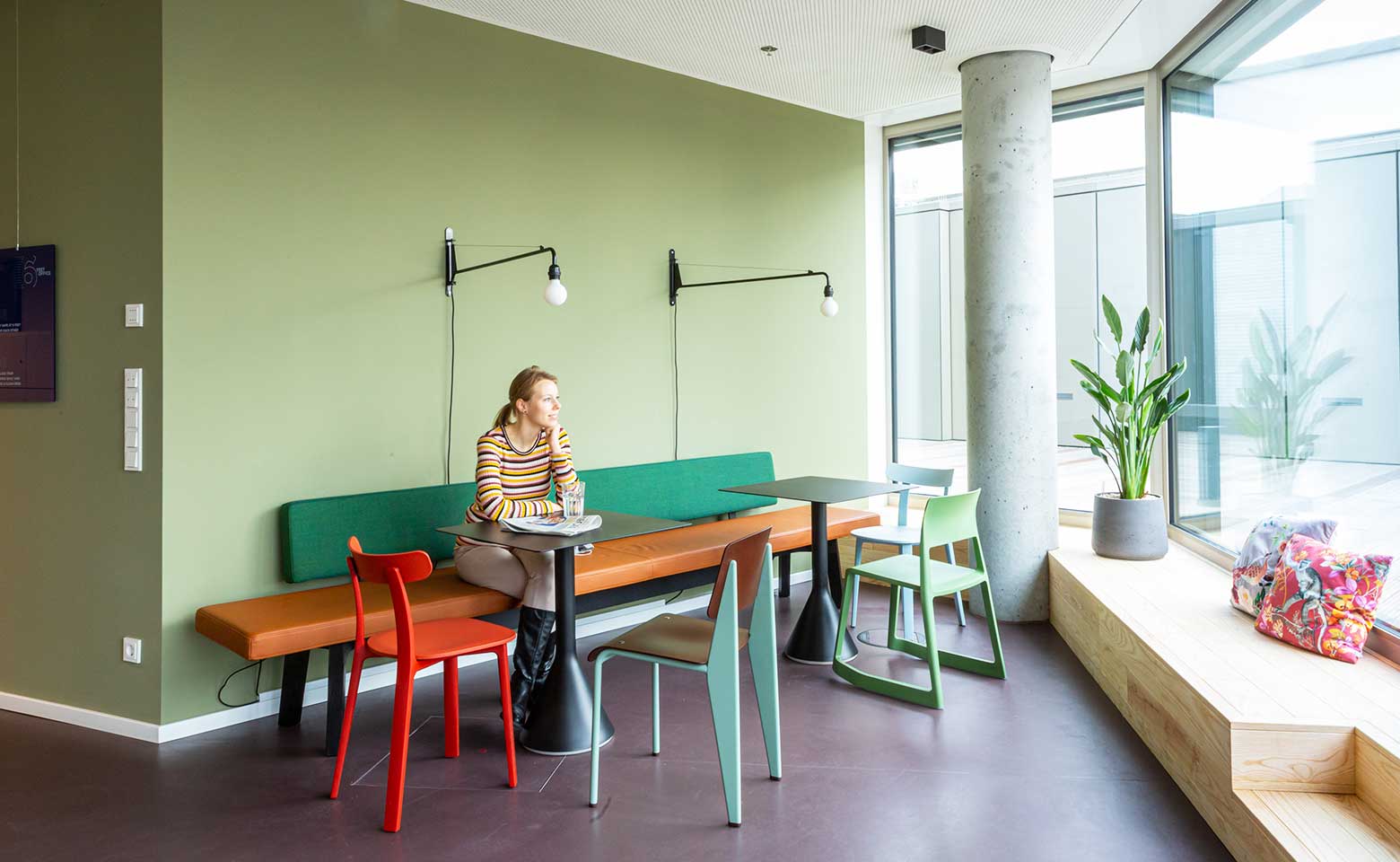 After only a few months of planning and redesigning, the new rooms in "The Westlight" have become an innovative, communicative and movement-friendly workplace with an integrated hygiene concept. And also serve as a showroom for our own services. Design options and materials can be discussed with customers directly on the "living" object.

In order to meet the requirements for a spacious yet flexible room layout, a large lounge and two terraces invite casual encounters. The surfaces appear open and wide, but - depending on requirements - also enable quick, spontaneous partitions with acoustic curtains. The meeting rooms have also been designed to be adaptable and are therefore suitable for every occasion: from the club room with a living room atmosphere to height-adjustable conference tables with swinging standing supports to the board room for larger groups, everything is included. Mobile partition walls ensure the “perfect fit” for different requirements.

The Westlight not only inspires our customers with coordinated details and refinements, but also inspires the team that works there. 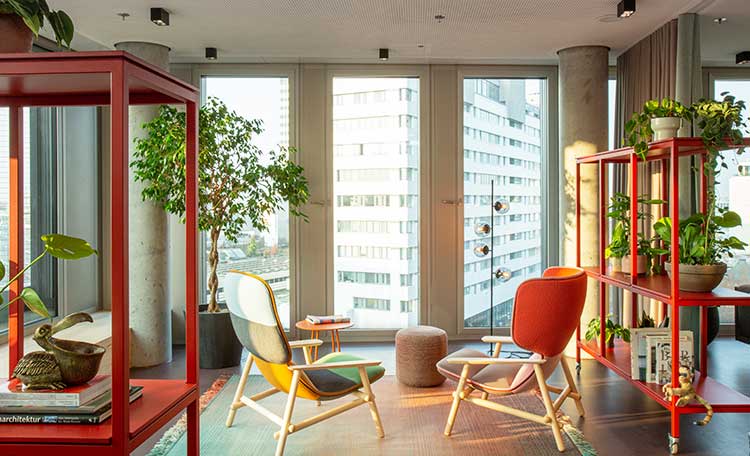 "We needed a completely new concept - fresh, modern, cool, high quality and, above all, versatile. An office for us. But also for our customers." 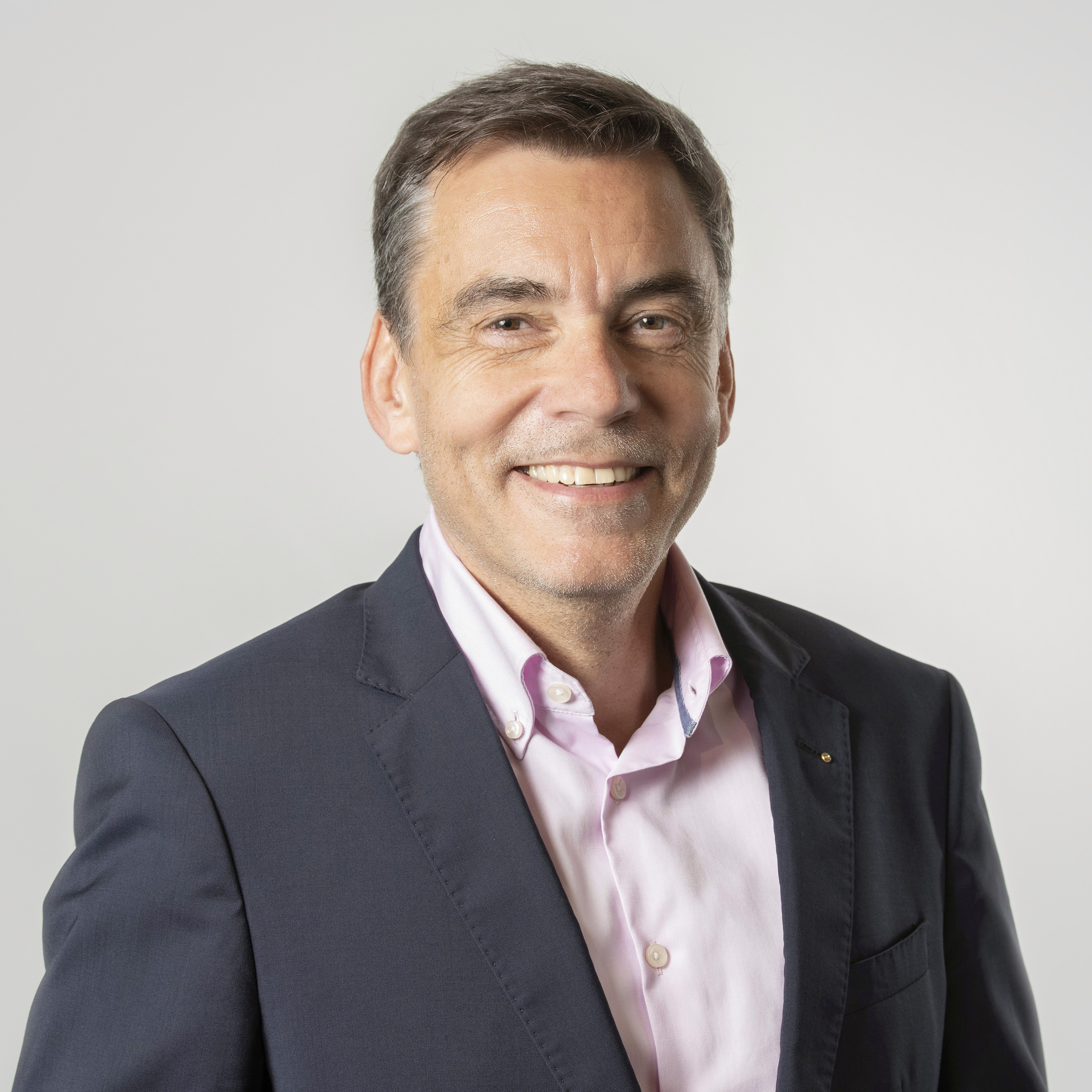 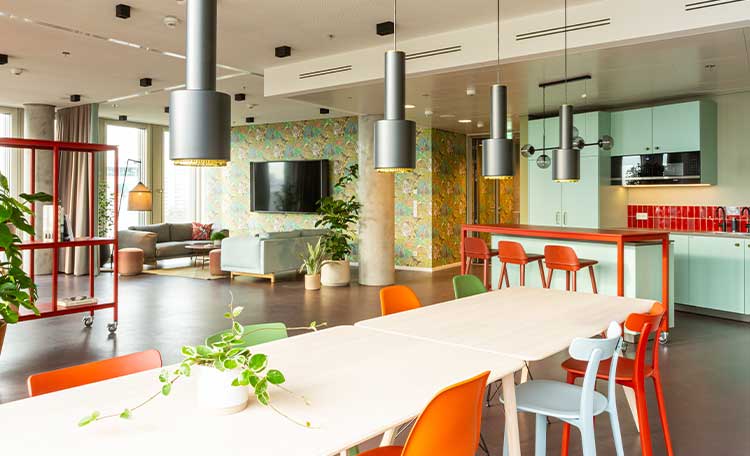 In the Berlin C&W office, the interior design team has combined a functional “New Work” atmosphere with a sustainable urban jungle look. And thus created a modern working environment for creative exchange and external representation. 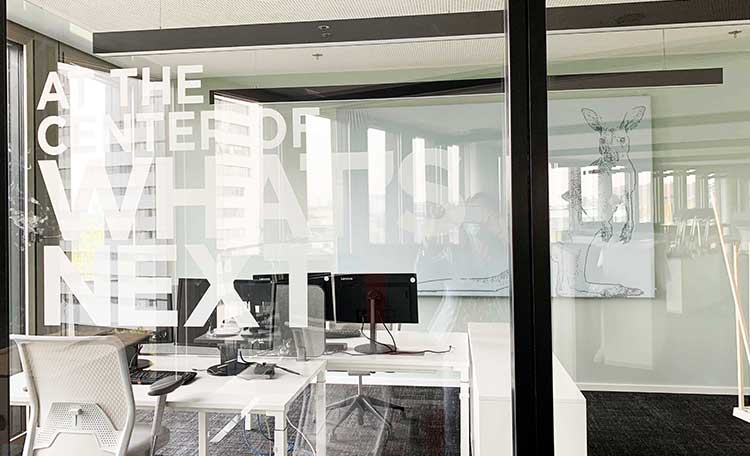 Press release about the new C&W office in Berlin

The new Berlin location of the international real estate consultancy Cushman & Wakefield (C & W) is now in the office building The Westlight in Berlin's City West ...

Consistent across EMEA, to ensure buildings and people thrive. Working together to unlock potential.
Learn More

Global transaction expertise wherever you need it. Are you ready for what’s next in the real estate industry?
Learn More

Our Global Occupier Services help you make intelligent business decisions and get maximum value out of the spaces you occupy.
Learn More

Success stories around the world 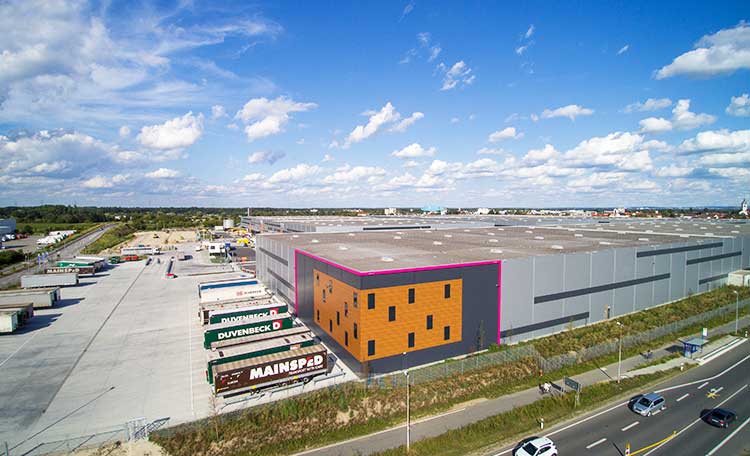 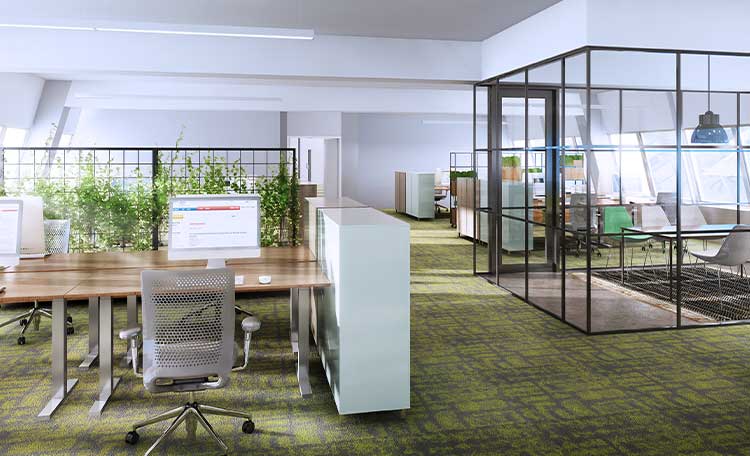 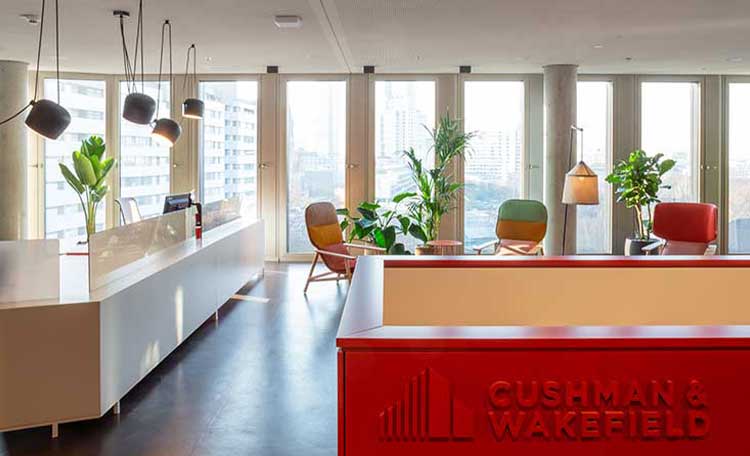