The COVID-19 crisis will prove to be a transformative moment in history. Long after the virus is behind us there will be far-reaching changes at every level of retail—some temporary, others permanent. From consumer behavior to financial models, organizations must adapt to weather the current storm. Those who will thrive in the post-Coronavirus era won’t just adapt but transform.

One of the greatest transformations that will stay with us is the accelerated adoption of grocery deliveries. While retailers that sell groceries in North America (grocery, convenience, drug, dollar, warehouse club and mass market super stores) are exempt from mandatory closures, business is anything but usual for these chains.

Growth in eGrocery
According to industry trade magazine Grocery Dive, in March 2020, 31% of American consumers (roughly 40 million) used online grocery delivery services. This is double the amount from the previous survey in August 2019. Among the findings of the survey:

Until shelter-in-place orders are lifted eCommerce will be the primary channel of business for most retail categories, supplemented by buy online pickup in store (BOPIS) and other accelerated strategies. Consumers will eventually resume shopping in physical stores, but a substantial portion of the market share gains that eCommerce experiences won’t be surrendered post-crisis.

In 2019, eGrocery in the United States accounted for $28.6 billion in total sales according to Statista. For the past four years, eGrocery has grown by an average of 20% annually, but still only accounted for 2.3% of all grocery sales as of the end of last year. This is all about to change.

At a minimum, we expect the growth rate for eGrocery to double in 2020 and account for at least 6% of all grocery sales in the United States, with a similar pattern expected in Canada. The additional cost of delivery has historically been a hurdle for many consumers, relegating eGroceries to a costly convenience in the minds of many. However, more volume in deliveries as well as the growing trend of grocers looking to take on this role directly, as opposed to relying on third-party providers, will mean greater cost efficiencies in the future. 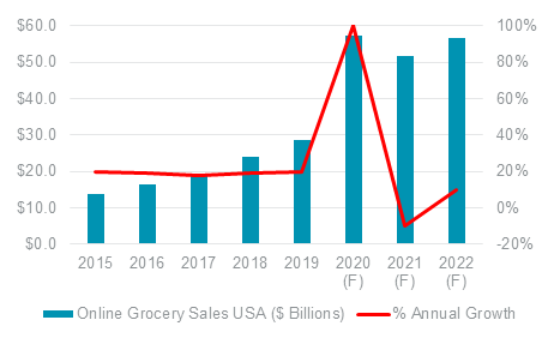 eGrocery Logistics
As an eCommerce category, grocery has lagged most other retail sectors for many reasons, some of which are purely logistical.

Grocery has the narrowest margin of any retail category. There is less flexibility to pass on delivery costs in the price of the product itself making consumer expectations of free delivery a challenge for the sector.

Grocery delivery requires maximum proximity to the consumer to keep delivery costs down and, more importantly, because delivering warm prepared foods, fragile items (eggs/produce), refrigerated, and frozen foods is challenging. Also, grocery deliveries are generally done one at a time, which means there aren’t the same delivery cost efficiencies of a typical delivery route that may deliver hundreds of packages in a day.

How Will This Change Real Estate?
The real estate model for grocery delivery is the exact opposite of mass market eCommerce because huge distribution centers on the outskirts of metropolitan areas don’t make sense. Amazon’s original foray into eGroceries, Amazon Fresh, demonstrated this. The eCommerce giant recognized it could not use its existing distribution chain for the grocery division, opting instead for smaller fulfillment centers in proximity to consumers. This meant the challenge of finding modern conditioned industrial space in dense urban areas where few options existed without expensive retrofitting.

For these reasons, most chains that have pursued eGroceries have opted to use the grocery store itself as a fulfillment center. Amazon purchased the grocery chain Whole Foods for this purpose. To date, the majority of all eGrocery sales have been driven by this model with major chains generally opting to utilize third-party delivery services.

One of the newest innovations on the real estate front is the automated micro-fulfillment center (MFC), that allows for small fulfillment centers to exist in heavily populated areas, including within grocery store stock rooms. These systems can store between 8,000 and 15,000 chilled or ambient SKUs and enable picking and packing of orders for delivery or pickup within minutes. The only challenge is that while these automated systems work well, they are limited to specific packaging types. Food producers will need some time to catch up to the technology, but they will have plenty of reason to. Midwest superstore chain Meijer announced late last year a pilot in Grand Rapids, Michigan with warehouse logistics firm Dematic and plans to roll out more MFCs this year.

Kroger partnered with British online grocer Ocado in 2015 and has been in the process of developing 20 automated grocery warehouse facilities. Initial plans call for facilities in Ohio, Florida, the mid-Atlantic states, and Texas, where the largest US grocery chain announced a planned facility in Dallas in early April. This came just one week after Kroger opened its first drive-thru pickup store at an MFC in the Cincinnati suburbs.

Change is Here to Stay
The impact of COVID-19 will mean that more major grocers will accelerate plans to utilize MFCs, build in-house delivery capabilities (as opposed to third-party options), and create new channels for connecting safely with consumers. The challenge will be the time and expense involved. Such shifts will be difficult to engineer in a condensed time frame, but are critical, not just because of the immediate impact during this crisis, but because these changes will have resonance after the pandemic as consumers continue to embrace eGroceries.

Eventually, eGrocery will return to its initial value offering to consumers as a convenience. But, as we’ve seen before, conveniences have a way of becoming necessity in the consumer mindset.

For more information on the MFC movement, check out the analysis Cushman & Wakefield published on The Future of Grocery Fulfillment. 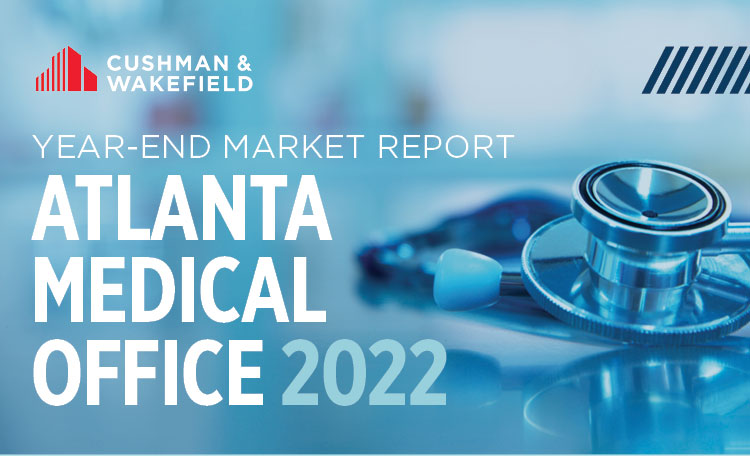 Get the latest update and report for Atlanta's Medical Office Market.
George Olmstead • 2/2/2023 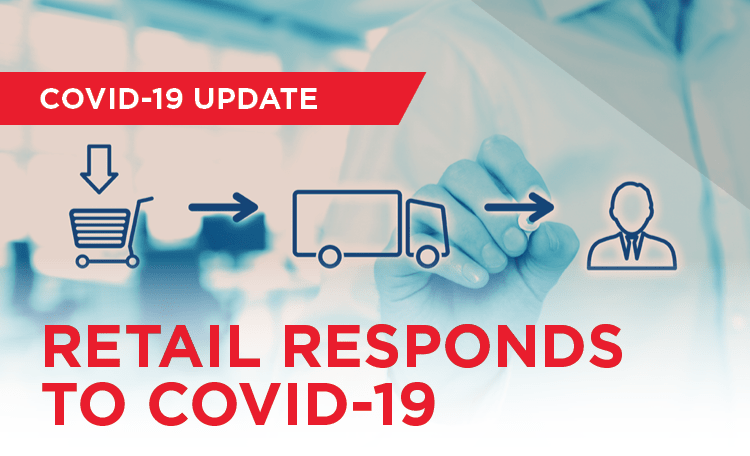 How is the industry being impacted by the unprecedented challenges of the global pandemic?
Barrie Scardina • 3/25/2020

Digital ordering has grown 300 percent faster than dine-in traffic since 2014. What can restaurants do to survive?
Matt Ashman
Your privacy matters to us
With your permission we and our partners would like to use cookies in order to access and record information and process personal data, such as unique identifiers and standard information sent by a device to ensure our website performs as expected, to develop and improve our products, and for advertising and insight purposes.

You can change your preferences at any time by returning to this site or clicking on Privacy & Cookies.

MORE OPTIONS
AGREE AND CLOSE
These cookies ensure that our website performs as expected,for example website traffic load is balanced across our servers to prevent our website from crashing during particularly high usage.
These cookies allow our website to remember choices you make (such as your user name, language or the region you are in) and provide enhanced features. These cookies do not gather any information about you that could be used for advertising or remember where you have been on the internet.
These cookies allow us to work with our marketing partners to understand which ads or links you have clicked on before arriving on our website or to help us make our advertising more relevant to you.
Cookie preferences
Agree All
Reject All
SAVE SETTINGS
Essential
Non Essential
Marketing