TORONTO, November 9, 2022 – Cushman & Wakefield announced today that the firm has represented Ontario Power Generation (OPG) in the $200 million sale of 76 acres at 800 Kipling Ave. to the Toronto Transit Commission (TTC) and Kinectrics. 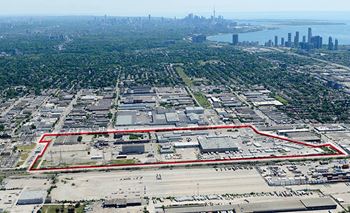 Located on Kipling Avenue north of the Gardiner Expressway in South Etobicoke, the site is one of the last remaining large-scale employment parcels in the City of Toronto and currently includes nearly 550,000 square feet of industrial/warehouse development, anchored by OPG and Kinectrics, and more than 225,000 square feet of office space.

The site has substantial future development upside, for which the in-place planning policy overlay is conducive to an array of uses, including industrial density, office, self-storage and other uses. Overall, the property offers 51.8 acres of net developable land.

“This sale truly benefits all parties involved. The asset offers significant long-term redevelopment opportunity as well as strong, near-term growth,” said Lever. “Its redevelopment potential, whether for industrial, office or some other use, is practically unmatched, especially in a market where industrial vacancy is less than 1%. It could be, conceivably, one of the largest and best located employment hubs in the Greater Toronto area.”

With the transaction, the property has been divided into separate parcels. This allows Kinectrics to remain on-site and the Toronto Transit Commission to expand operations in the area. OPG also will be able to retain its operations on-site through a short-term leaseback in preparation for its consolidation of staff in its future corporate campus in Durham Region.

In addition to superior access to major commuter routes such as Highways 427 and 401, the Gardiner Expressway and Queen Elizabeth Way, 800 Kipling is located 1.4 kilometres from Kipling station connecting to the GO Train and the TTC Subway services as well as to multiple bus routes. TTC also operates the Pearson Airport Express bus from Kipling Station connecting to the airport in a 20-minute ride.

“The area around 800 Kipling has seen an influx of commercial and residential development with a wide variety of projects coming online in the near future,” said Rogers. “While it’s already proven as a well-established trade area for industrial, the continued residential intensification in the immediate area will continue to drive the desirability of this location.”

Added Brad Dykeman, Cushman & Wakefield Executive Managing Director and Managing Principal, “The site at 800 Kipling is a landmark in commercial real estate circles. It has great potential and utility, but it required a tremendous amount of preparation by both the Cushman & Wakefield and OPG teams. It was imperative that all the information pertaining to the property was qualified and available to all parties through a fair and transparent process. With the level of detail and collaboration involved, it’s a great example of what teamwork can accomplish. Cushman & Wakefield is proud to represent OPG in this transaction.”