Take-up (lettings and owner-occupier) in Düsseldorf’s office market was particularly strong in the 3rd quarter, at just under 109,300 sq m. The main reason for this result is the large number of lettings in the medium-sized segment (1,000 to 3,000 sq m) and some large-area lettings, reports real estate consultancy firm Cushman & Wakefield.

Major lettings in the 3rd quarter
The largest letting in the 3rd quarter was to the Bundesanstalt für Immobilienaufgaben (Bima) for the main customs office with around 12,600 sq m in the Toniq1 new building development at Wanheimer Strasse 74a-b. Construction has started on the new main headquarters of tour operator Alltours on Mannesmannufer, contributing 10,600 sq m for own-use to take-up.

The cumulative total for the first three quarters of 2021 is some 213,500 sq m. Over this period, the strongest impetus in terms of take-up has been provided by small-scale lettings of up to 500 sq m and office deals in the medium-sized segment between 1,000 and 3,000 sq m. Around two-thirds of the total take-up is accounted for by these two size categories.

Luisa Rotthaus, Branch Manager at Cushman & Wakefield in Düsseldorf, commented:
"Fortunately, the Düsseldorf office market is now able to report larger deals again for the first time this year. Looking at the sectors, it is not surprising that public administration is the largest leaser of space. Leasing decisions are often made here irrespective of the current economic situation. In view of the still modest number of active large-scale applications, we are still sticking to our take-up forecast of just below 300,000 sq m by the end of the year." 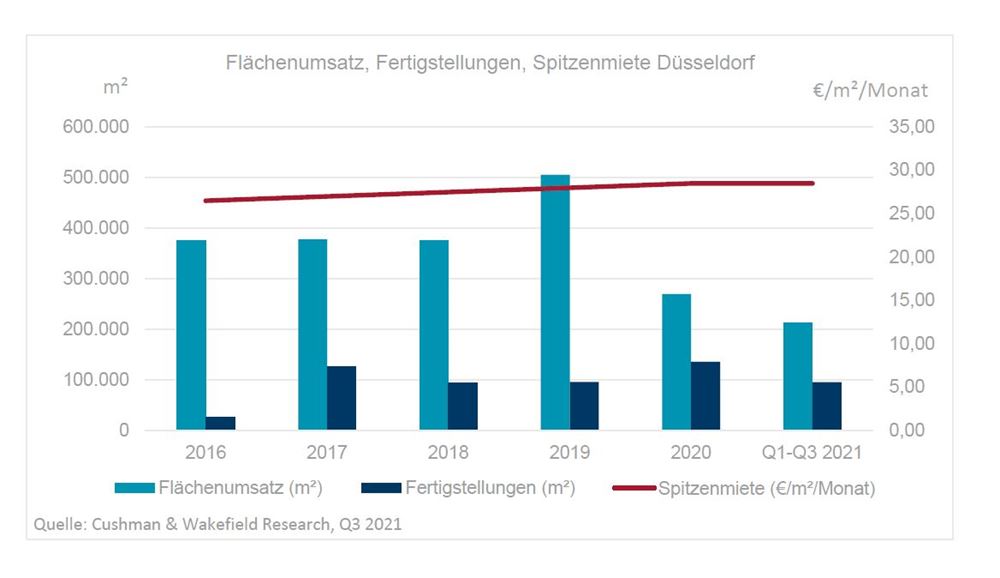 Vacancy rate constant
The office vacancy rate at the end of the 3rd quarter is just under 6.9 percent and has increased only slightly compared to the same point last year (6.8 percent). In total, the amount of available office space that can be occupied at short notice has risen by just under three percent to around 633,800 sq m over the last twelve months.

Pre-letting rate in development projects high
In the first three quarters of the year, office completions totalled around 96,000 sq m, which is almost 24 percent higher than in the same period last year. By the end of the year - if construction progresses according to plan - another 65,000 sq m of office space will be ready for occupancy, of which a good 83 percent has already been allocated to users. In total, the office completion pipeline in Düsseldorf (current space under construction) amounts to around 271,200 sq m to 2024, of which a good 70 percent has already been let.

Average rent resumes upward trend
At the end of the third quarter, the achievable prime office rent was EUR 28.50/sq m per month in the Central Business District (CBD) submarket. No change in the prime rent is expected to the end of the year. The weighted average rent for the past 12 months is currently EUR 15.81/sq m per month. Compared to the same point last year, this represents a decline of around three percent. Since the beginning of the calendar year, however, the average rent level in Düsseldorf has risen steadily again. A further upward trend in the weighted average rent is to be expected - primarily due to an increasing number of lettings in modern and high-priced properties.