The annual ‘Main Streets Across the World’ report tracks rents for 448 locations across 68 markets - the largest number ever included since it started in 1988. The report ranks locations by their prime rental value using Cushman & Wakefield’s proprietary data.

Last year Causeway Bay ended five years of domination by New York’s Upper 5th Avenue and in the 2019 rankings, it retains its position with rents to locate a store amounting to US$2,745 per sq ft/ year. Upper 5th Avenue is in second place at US$2,250 psf/yr, with London’s New Bond Street third in the global list, with annual rents at the London thoroughfare having risen 2.3% in the past 12 months to US$1,714 per psf/yr.

The Avenue des Champs Elysées in Paris (US$1,478 psf/yr) and Milan’s Via Montenapoleone (US$1,447 psf/yr) complete the top five. The biggest rental rise in the top 10 saw Sydney’s Pitt Street Mall increase rents by a colossal 17.9% over the past 12 months to reach US$1,076 psf/yr. Five of the top 10 global streets were in Europe, with four in Asia and just one in the US.

The Asia Pacific region is in a relatively strong position, with rents in over 80% of locations covered either rising or stable. India recorded a particularly strong performance, with solid rental growth across several cities, while retail rents in Hong Kong have been resilient in the face of the recent protests - although the outlook is more uncertain.

Kevin Lam, Executive Director, Head of Retail Services, Hong Kong at Cushman & Wakefield said: "Hong Kong's Causeway Bay (Russell Street) remains the world's most expensive retail street this year, based on data as of June 2019 at the time the global survey was completed. Since then, however, the Hong Kong retail market has come under growing pressure from the local social unrest that has led to a sharp drop in tourist arrivals and retail sales, as well as interruptions to retailer operations, especially during weekends. As a result, retail rents have fallen across all submarkets in recent months and the outlook for the remainder of the year is muted.”

"However, some retailers are seeing the current market correction as a rare opportunity to return to the high street and we therefore expect some adjustment in the retail trade mix. In particular, trades that focus on mass market demand and local consumption, such as the education, lifestyle and sports/athleisure sectors, will fare better in the current environment. We are seeing a number of such retailers cautiously looking for opportunities to expand or seeking a better rental package," added Mr. Lam.

Report author Darren Yates, Head of EMEA Retail Research at Cushman & Wakefield, said: “In terms of rental performance, this year’s results are encouraging and demonstrate the resilience of the premier retail locations. Rents on the world’s top retail streets have been fairly stable and there is greater clarity on where retail is heading. However, there is downward pressure on rents in many weaker locations, particularly in the more mature markets of Europe and North America. In Asia Pacific, retail has generally performed well across a very diverse group of markets.

From a European perspective, New Bond Street leads the way ahead of Paris and Milan, with Zurich’s Bahnhofstrasse at US$866 psf/yr and Vienna’s Kohlmarkt at US$513 psf/yr completing the top five. Dublin’s Grafton Street comes in at number 7 of the top 10 European streets at US$401 psf/yr. Among the top 10, Ermou in Athens saw the biggest rental rise of 14% to reach $361 psf/yr. Overall, rents in around 70% of locations in Europe were stable or up on last year. Polarisation is evident, however, between the more established markets of North Western Europe and Southern, Central and Eastern Europe, where modern supply is lower and online sales have yet to really accelerate.

In the Americas rental trends have shown a wide degree of variation. Rents in Canada and the US remain under pressure in many areas, although there can be significant variations between individual streets. There is some good news in that rents in New York streets appear to be stabilising, following falls in recent years. Latin American retail markets continue to mature, although rents can be volatile.

Mr. Yates noted: “Online sales continue to increase around the world, but while much of the narrative is focused on the challenges the internet poses for traditional bricks and mortar, the relationship between the two is more complex. While quantifying the value of the store has become more difficult, it remains an important touchpoint for the consumer and generates both in-store and online sales by acting as a showroom and creating a wider brand presence - the so-called ‘halo effect’. The most successful retailers will be those who best integrate their physical and online operations to create a seamless, positive brand experience for shoppers.” 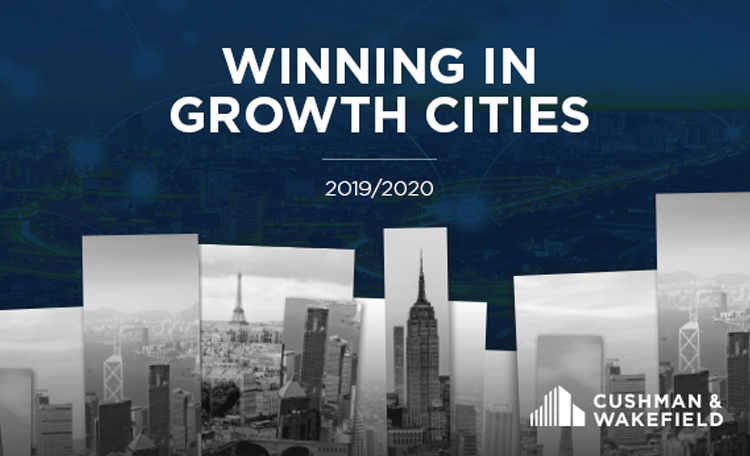 Winning in Growth Cities is an annual report which examines global commercial real estate investment activity, predicting which will be the winning city markets in 2020 and the key themes for property investment over the year ahead.
Christine Li • 07/10/2019