Investment Volumes Down by 27% year-on-year, But Pricing Remains Relatively Stable with Limited Signs of Distress

Transaction activity in the investment market is expected to improve in H2 2020 but will remain below trend despite limited signs of distress so far.

“Investors have remained on the sideline for much of H1 2020, with volume down 27% year-on-year. As economies reopen, investment activity is expected to increase. Logistics appetite continues unabated and there is heightened interest in alternative asset classes. We are also experiencing ongoing interest in the office sector, albeit generally for lower risk stabilized assets in CBD areas.” said Gordon Marsden, Regional Director, Asia Pacific Capital Markets at Cushman & Wakefield.

The overall regional investment volume was down by almost 40% y-o-y in Q1 2020 at US$119bn – the softest quarter since Q1 2016. On the positive side, volume picked up in Q2 2020 to reach over US$200bn, however, this is below the three-year rolling quarterly average of US$209bn. The implication is that investment in 2020 is likely to fall well below last year’s totals.

Key cities such as Shanghai, Beijing, Seoul (Including Young City transaction), and Tokyo saw activity through H1 and seem set to see ongoing activity in the second half.

At the sector level, investment in all asset classes is well below rolling averages, though investment in the retail and hotel sectors have been hard hit with both recording anemic volumes in H1 2020 – down 52% and 41% y-o-y respectively. There is limited interest in Retail or Hospitality assets, except in the case of retail where they play to the underlying daily needs of consumers. More broadly, these two asset classes will attract capital if there is repositioning potential or the possibility of a major adjustment in pricing.

Office investment also weakened dramatically, down 43%, to $27bn. In contrast, the logistics sector continues to gain from the growth of ecommerce and has seen sustained investor interest and while down year-on year, the decline has been less dramatic than in other sectors at 3% for H1 2020, which could also be more a product of a shortage of supply than an outright fall in demand. 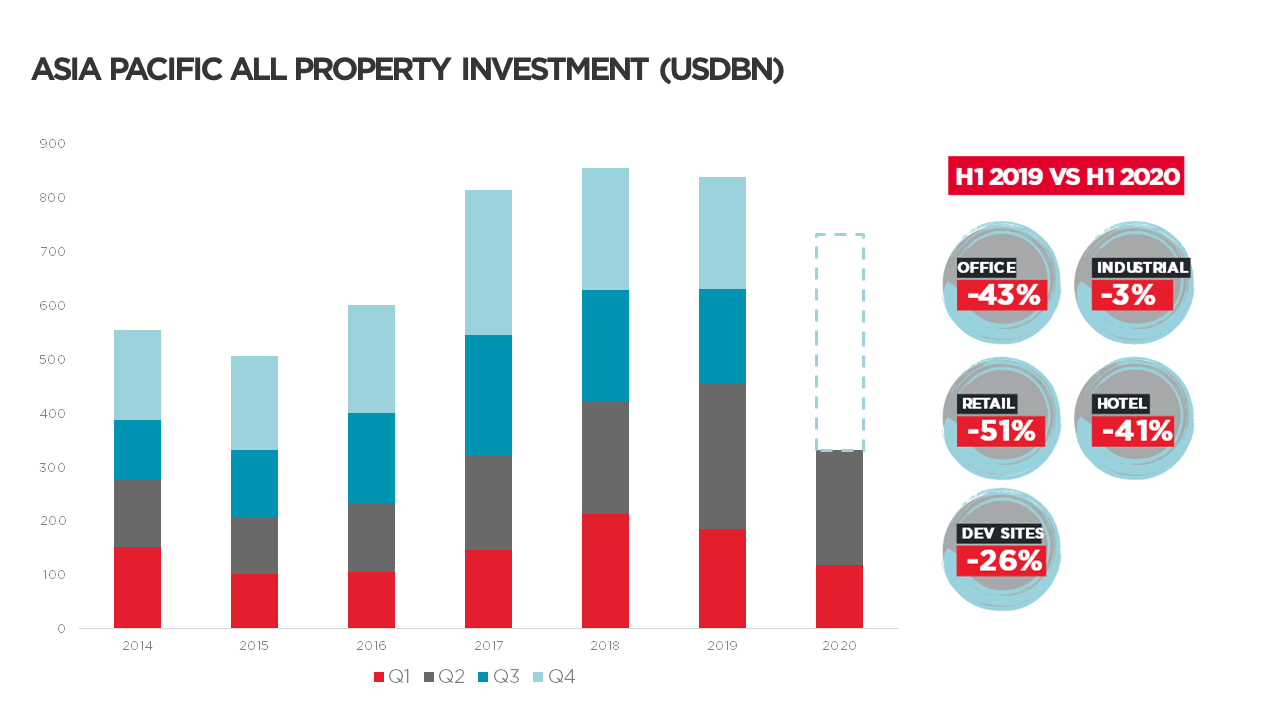 Deployment of capital, of which there remains an abundance, is likely to remain challenging, although there is some encouraging activity in participation via clubs, joint ventures and partnerships. This may include follow on investments with managers and operators where the relationship was formed pre-COVID-19 where the need to travel to consolidate or cement the relationship is not as essential.

With China showing early signs of a rapid rebound and the rest of the region set to follow suit towards the end of the year or early next year, the Asia Pacific region is proving to be particularly attractive to global investors, especially in mainstream sectors such as office and logistics as well as growing subsectors such as data centers and senior living. While a full recovery is still some way off, volumes would have likely troughed and should gain momentum in the latter part of the year.