In the first half of 2021, a total take-up of 1.1 million square metres was achieved in the top-5 office markets. This corresponds to the level of the same period last year, but is around 25% below the H1 five-year average. For 2021 as a whole, Cushman & Wakefield expects take-up to reach 2.5 million square metres.

Of the total of 17 deals involving more than 10,000 square metres of office space, corresponding to 22 % of total take-up, nine were in Berlin alone. However, the largest deal of the second quarter was concluded in Frankfurt with pre-leasing by Nestlé Germany of some 20,000 square metres in the "Kreisler" development project near the main railway station. 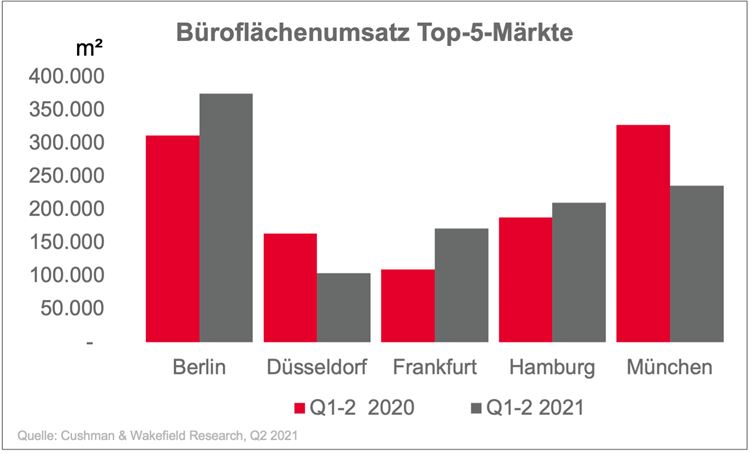 "After several months of 'shock paralysis' or maintaining a wait-and-see attitude, an increasing number of companies are actively reviewing their future office situation. Following the ending of compulsory working from home, they are considering the prospects for their workforces returning to the office. In order to inspire employees to do this, attractive offices that enable modern and flexible working are certainly more motivating than the rigid specification of just setting a date. In addition, the experiences of the past months will influence those responsible in the long term and prompt new considerations when renting future space," comments Christian Lanfer, Head of Office Agency Germany at Cushman & Wakefield. 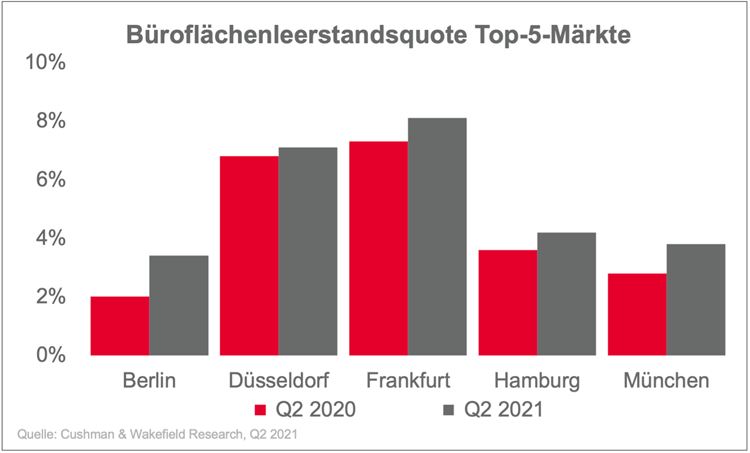 A further increase of a similar magnitude is expected to the end of the year. The average rent index is slightly higher at 147.4 points. The reason for this is that average rents have been rising more strongly than prime rents since summer 2019.

More rent-free periods
Over the course of the year incentives, particularly in the form of rent-free periods, have increased in all top-5 markets. On average, such incentives amount to approximately 6% based on a 5-year lease in prime city centre locations. In comparison, incentives bottomed-out at 2% at the end of 2019.