SINGAPORE, 19 August 2019 – The Southeast Asia (SEA) region including Singapore, Indonesia and Malaysia will be the fastest growing region for co-location data centres over the next five years, with its market size expanding by a compounded annual growth rate (CAGR) of 13 per cent between 2019 and 2024.

Latest research by Cushman & Wakefield and Structure Research projects data centre growth in Southeast Asia to be spurred by the rapid pace of digitization and the surge in demand for cloud-based services as a result.

Major corporates such as Google, Alibaba Group, Amazon Web Services have expanded their cloud infrastructure footprint to facilitate their respective expansion plans over the last few years and momentum is expected to continue. The progressive roll out of 5G networks across the world is expected to fuel demand for data centres. A 5G network could be up to 20 times faster than the current 4G networks and would spur massive consumption of data and unlock new capabilities such as self-driving cars, cloud gaming and a thriving ecosystem of smart appliances that require a constant connection. In Asia Pacific, Singapore is one of the early adopters of 5G and is on track to roll out 5G mobile networks by 2020.

The second fastest growing region is the Asia Pacific, which is expected to grow steadily at around 12 percent CAGR over the same period. North America is the largest co-location data centre by market size at US$17.2 billion currently but the Asia Pacific region is expected to take over the top position by as early as 2021. The total market size for Asia Pacific co-location data centres is forecast to be around US$28 billion by 2024, 20 per cent higher than the US$23.4 billion market size of North America. 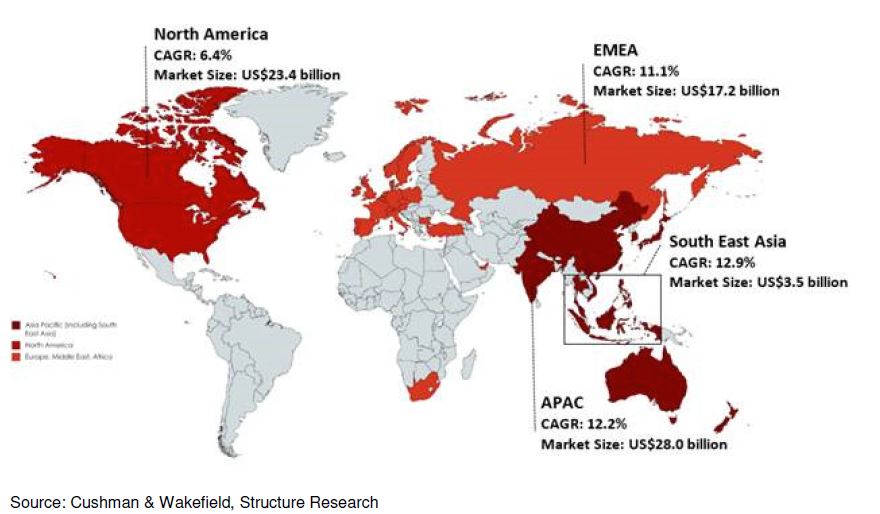 A detailed analysis of success factors across 38 countries and cities globally also shows the strength of Singapore’s data centre market. Singapore is ranked the third most robust data centre market, the only data centre market in Southeast Asia to have featured in the global ranking. Its ranking jumped four spots from seventh to third and retained the top spot in the

Asia Pacific region since two years ago when the study was conducted. The index identifies the top competitive factors such as connectivity, ease of doing business, political stability, corporate tax rate, natural disaster, energy and security that are likely to affect the successful operation of a data centre. Countries and cities are assigned scores based on the weightage allocated to each of the factors.

Singapore’s rise in the global index comes on the back of its improved high-speed connectivity, political stability and low risk of natural disasters relative to other countries. Being sheltered from natural disasters and robust infrastructure, many content operators continue to take advantage of Singapore’s prime geographical location to service their regional clients in Malaysia, Indonesia and Thailand. Taking these factors together, Singapore ranks top in the data centre competitive index in the Asia Pacific region. 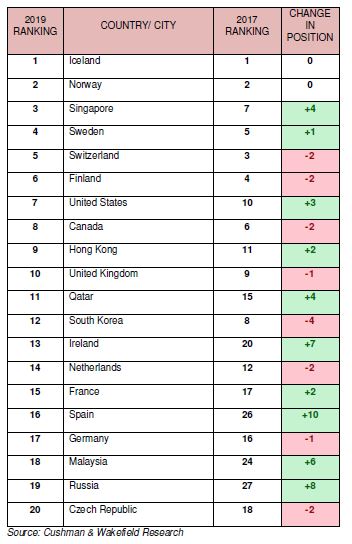 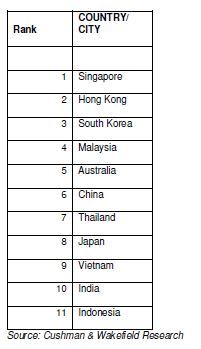 Although the rest of the SEA countries such as Malaysia, Indonesia, Thailand and Vietnam rank relatively lower in the risk index, the potential commercial upside for data centre players is significant.

Mr Pook added “Still, the infrastructure in these markets is not fully developed, posing some challenges for data centre providers. As such, well-located data centres that are built with redundancies will therefore be in short supply and in high demand. Data centre service providers should weigh the commercial opportunities against the risks and put in place appropriate measures to mitigate and manage risks accordingly.”

Singapore has attracted a number of tech companies to set up data centres. Facebook set up its US$1 billion data centre in the city state. It would be its first in Asia, and 15th in the world, a strong testament to Singapore’s continued strength as a global data centre powerhouse. Apart from Facebook, we also saw Equinix, Digital Realty, ST Telemedia and at least two other operators having successfully tendered for land plots from Jurong Town Corporation to build data centres.

Recent reports point to Indonesia having the greatest mobile e-commerce penetration rate, while the highest number of mobile banking usage is observed in Thailand. A study by Google and Temasek Holdings approximated that SEA’s internet economy will expand expeditiously from US$72 billion in 2018 to a staggering US$240 billion by 2025, driven by mobile internet services. SEA’s internet penetration rate was only 25 per cent five years ago. This figure has since improved tremendously and stands at 63 percent currently. Approximately 415 million people in SEA are able to access the Internet, which was a huge contrast to the 380 million people just a year ago. Compared to the United States and the United Kingdom, which have rates of above 90 per cent, mobile usage in SEA has huge potential for expansion.

Vietnam's long coastline makes it a natural gateway and landing point for sub-sea cables to the other landlocked SEA cities. As sub-sea cables are developed in these markets, the second and third tier markets become more connected to the global marketplace as the data centres are now domiciled in their home country. Over time, demand for data centres may also shift to edge locations such as secondary markets and smaller nodes in major cities, as architectures start to decentralise. This could boost the demand for colocation data centres in the secondary markets. That said, cloud maturity in SEA region is still in its early stages, due to evolving regulations, local cost of labour and the availability of workforces familiar with cloud technologies.

Christine Li, Head of Research for Southeast Asia said “As a whole, Southeast Asia as a region offers many advantages for data centre players with a longer-term view. Until the levels of infrastructure in the emerging markets of Thailand, Indonesia and Vietnam are sophisticated enough to support the smooth operation of data centres in these markets, data centre players will continue to leverage the twin strengths of Singapore and the emerging markets of Southeast Asia to navigate the next wave of data centre development. They will favour Singapore for its relative security to store mission critical data and store the business-as-usual non-mission critical data in the neighbouring countries.

“Although there is much room for improvement in infrastructure in n SEA, the investment potential of data centres in Southeast Asia far outweighs the teething issues. The lack of data centre supply across the region means that demand remains keen, particularly in Singapore; first from the private sector and from the companies who tap into the government’s efforts to accelerate digital capability in line with its goal to be a Smart Nation. More investments into data centre developments are expected even as competition for space heats up.” Ms Li added. 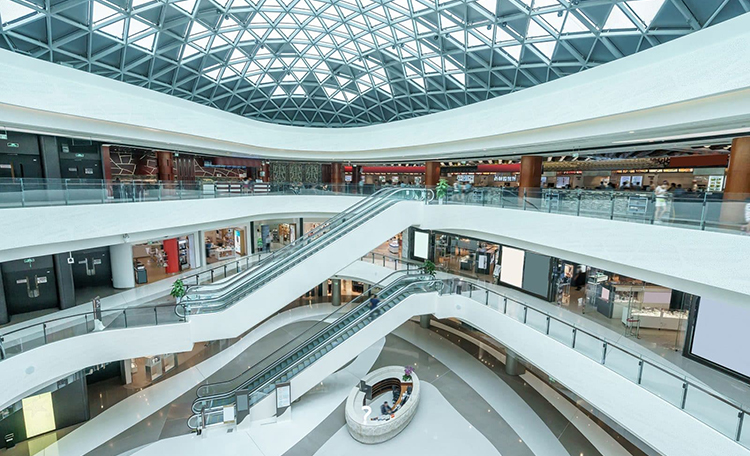 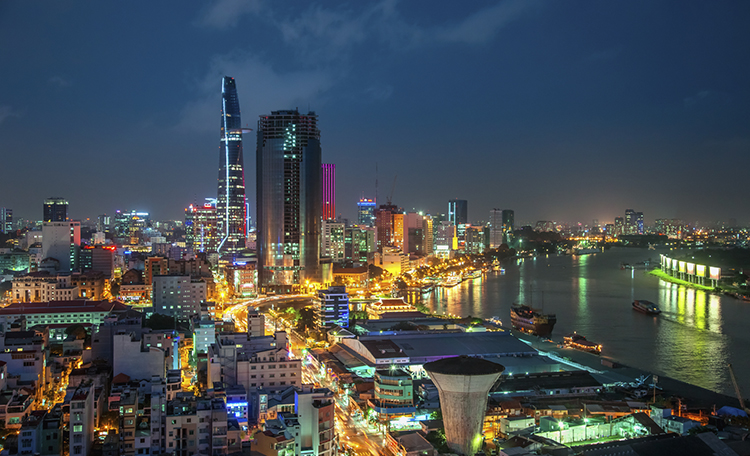