Three decades have passed since Vietnam first embarked on the process of economic opening. The industrial and manufacturing market in the South of Vietnam has grown tremendously, as reflected in its production index, export turnover, FDI, and GDP. The region comprises 17 provinces and cities, is a vibrant economic region, and is a favorite destination for new investors looking to enter the Vietnamese market. The Southern key areas scored strong GDP growth over the past 5 years, led by Binh Duong with US$6,700/person/year, as of Q2 2022.

In 2021, export turnover of goods reached US$125 billion, up 11% over the same period last year. Being the first and long-running industrial development center of Vietnam, there is a concentration of traditional industries such as rubber and plastic or textile industries in the South. FDI inflows into the manufacturing industry and real estate market accounted for 75% of the total accumulated committed capital, with US$254 billion and US$65 billion respectively. According to Cushman & Wakefield's 2022 report, Ho Chi Minh City, Binh Duong, Dong Nai, Long An, and Ba Ria - Vung Tau supply a total of more than 25,000 hectares of industrial land for the region, with occupancy rates up to 89 %. The average rental price is recorded at US$135/m2/lease term.

The sharp increase in foreign investment into the industrial sector continues to drive the development of diversified product models serving newly established small and medium enterprises in the South. The market for ready-built factories and ready-built warehouses has exploded since 2017 with the joint venture Warburg Pincus and Becamex, and to date, this secondary investment market has received a significant amount of capital. Also active in this segment are domestic investors with a 'home court' advantage such as Long Hau, and Sonadezi. One of the most active developers in this segment is KCN Vietnam, with 6 projects spanning across Vietnam. As of Q1 2022, the total supply of ready-built factories in the South reaches 4.2 million m2 and ready-built warehouses is 3.9 million m2, with rental prices ranging from US$3.5 - 6.0/m2/month. 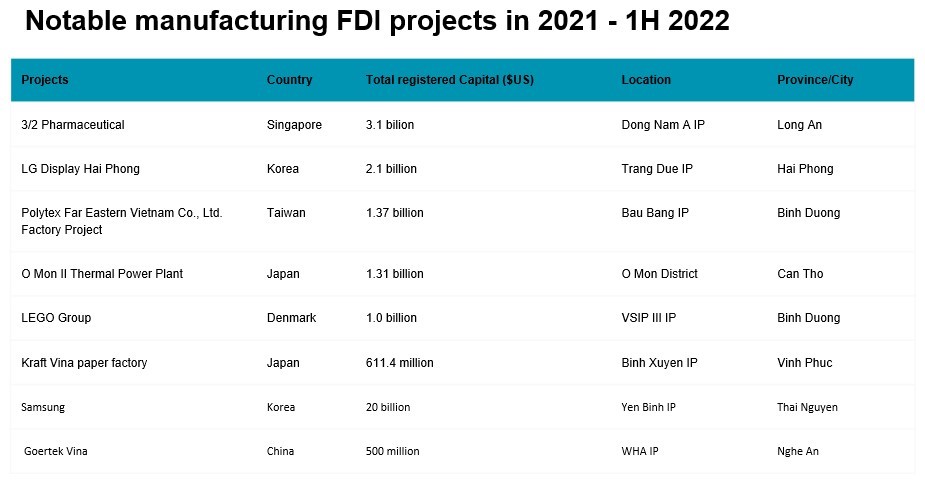 The emergence of Covid-19 in 2020 has left the global supply chain severely disrupted, and this historic event was a wake-up call for corporations to diversify their production locations to limit dependence on one country. Vietnam emerged as a bright star to gain from this wave, thanks to its stable political and social backdrop, favorable geographical position with proximity to China, maritime trade routes, and some of the busiest container ports in the world.

“Global enterprises looking to expand production in the Southern region of Vietnam are concerned first with the market size and economic development policy. It is clear that the Southern population of 40 million people with a rapidly integrating economy is an important factor. The next most important factor is the abundant workforce that is always ready to welcome new investments in technology,” said Ms. Trang Bui, General Manager, Cushman & Wakefield Vietnam.

Highways are invested and built on the backbone traffic axes of the region, connecting industrial centers to transit points of the South. However, some important highways and parallel national highways are often overloaded and congested, resulting in a trip of more than 2 hours to transport containers to the main seaport. The length of the expressway is still low compared to developed countries, density is not evenly distributed among regions, and some road projects with large transport demand are still delayed such as Bien Hoa - Vung Tau expressway, HCMC - Moc Bai, highways in the Mekong Delta, Ring roads 3 and 4.

The area has about 110 ports, of which gateway ports combined with an international transshipment hub in Ho Chi Minh City have been established. Ho Chi Minh City and Ba Ria - Vung Tau have large-scale specialized wharves associated with industrial parks, metallurgical complexes, refineries and petrochemicals, and thermal power centers to receive ships. According to the Vietnam Maritime Administration, the volume of goods through the seaport in the first 6 months of 2022 reached nearly 370.8 million tons, up 2% over the same period in 2021. In which, Ho Chi Minh City contributed 67.2 million tons and Vung Tau 46.9 million tons. The volume of goods by container through the seaport reached 10.5 million TEU, up 2% over the same period in 2021. 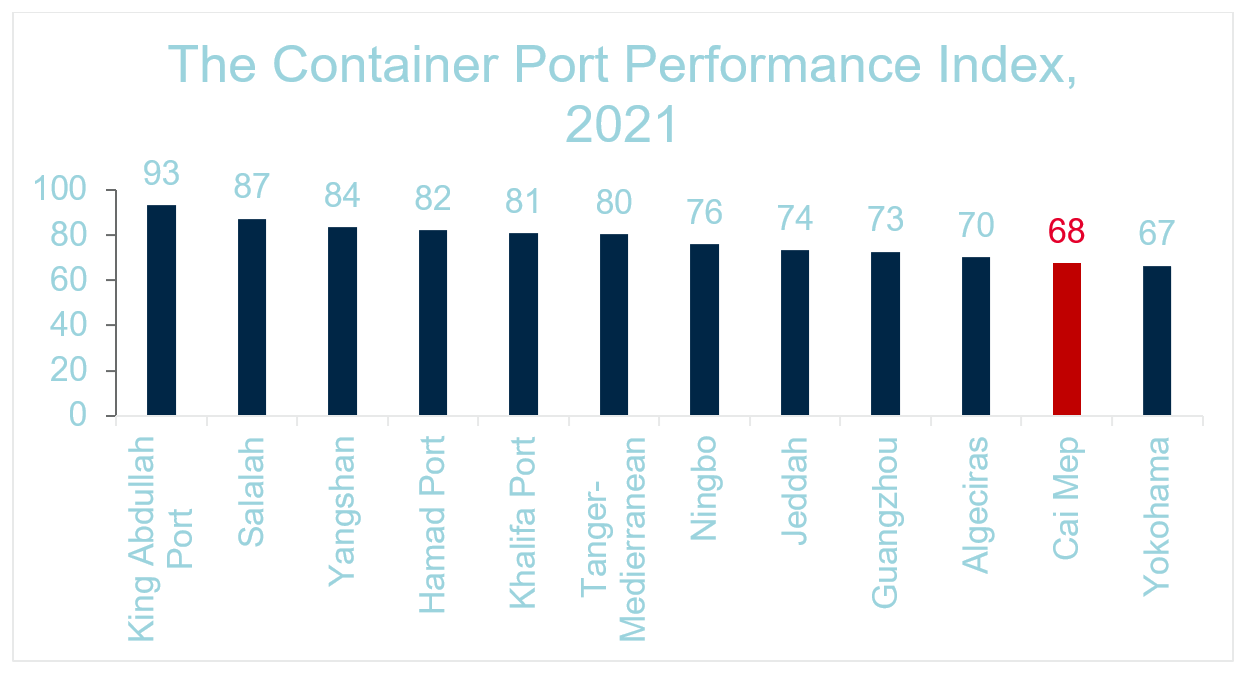 Prominent in the South is the Cai Mep - Thi Vai seaport cluster which in 2020, has successfully received the Margrethe Maersk super container ship with a tonnage of 214,000 DWT with a capacity of up to 20,000 TEUs, measuring at 399.23m long, 59m wide. This marks a turning point in Vietnam's transportation industry. For the first time, ocean carriers were able to provide services directly from Vietnam to North America and Europe without the need for consolidators to connect with regional transshipment hubs such as Singapore, Europe, and Hong Kong. The absence of a consolidator and reduced transshipment costs are estimated to save about 150–300 US$/TEU for containers going to and from Vietnam.

In addition, the area has more than 6,500 km of rivers and canals with 6 waterway transport routes being exploited and operated on two main river systems, namely the Dong Nai and Mekong River system. Not only Vietnam but the industrial regions of Indochina countries also benefit, especially the Bavet area of Cambodia with the distance to Cat Lai port up to 90km, closer than the transportation to their Sihanoukville port. 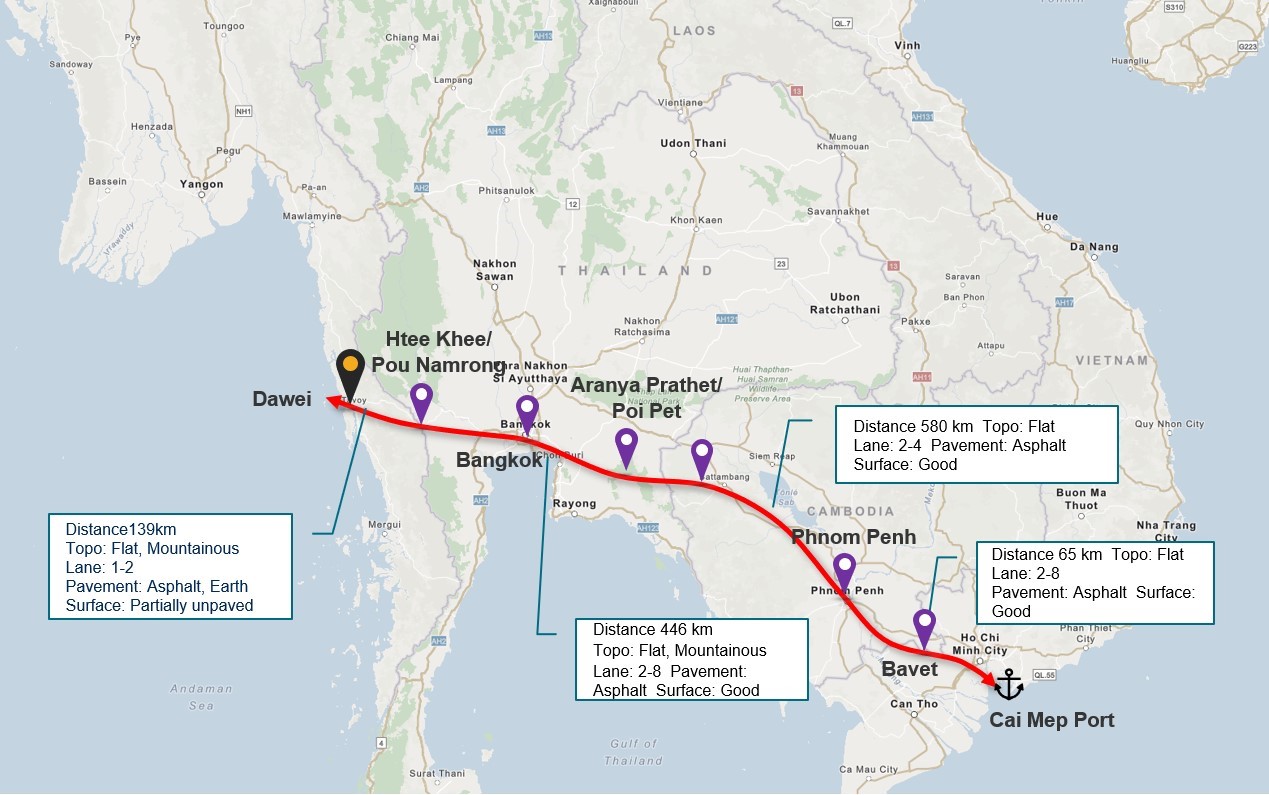 Among the eight airports in the South, Tan Son Nhat International Airport already has a specialized cargo terminal. For the remaining airports: Can Tho, Phu Quoc, Buon Ma Thuot, Lien Khuong, Rach Gia, Con Dao, and Ca Mau, investment has been made to complete a cargo handling area that is separated from the passenger transport chain to facilitate the loading and unloading of goods. In the future, when Long Thanh International Airport goes into operation, it promises to drive the Southern region to develop into a specialized aviation logistics center in the country and region.

In May last year, Vietnam experienced another pandemic outbreak, and the Government imposed a strict distancing order on a large scale. Manufacturing industry activities were brought to a halt and the entire Southern supply and logistics system was directly affected. This event further emphasized the gaps that need to be addressed in the Southern supply chain, especially when it comes to infrastructure and warehousing.

“We recorded a sharp increase in inquiries for production expansion from end of Q1 2022 upon the re-opening of Vietnam’s international borders. However, some new foreign investors are delaying their decision due to the global market uncertainties, lag in the development of infrastructure connections in the South, increasing transportation costs, lengthy approval procedures, or lack of human resources.” Huynh Buu Tran, COO of KCN Vietnam shared.

Tran stated, “The health of an economy is directly proportional to the efficiency of its supply chain system. Improving efficiency will help manufacturers, logistics providers, and regulators to minimize foreseeable lags, thus increasing output and reducing operating costs per unit. What we need to do urgently is to develop quality infrastructure connectivity and develop our local Vietnamese SME supply chains manufacturers, to improve Vietnam’s position and increase our competitiveness within the region”.

The manufacturing industry is the heart of the country's economic development, and domestic production capacity is the most appropriate measurement. A strong country needs to have internal production strength to limit vulnerability against geopolitical disruptions. In the long term, many domestic enterprises will have the ability to adjust their production plans to ensure supply chain continuity and reduce the risk of similar ‘shocks’ in the future.

With these attractive conditions, the South of Vietnam is fully capable of competing with Singapore and Hong Kong. Becoming a global goods transshipment hub is not the only goal, we must also combine this with our domestic production capacity to become an inseparable link in the world supply chain, Ms. Trang concluded.

KCN Vietnam was established to meet the increasing demand for premium industrial properties for rental. As a developer, KCN aims to provide professionally designed, built, and managed developments for the industrial and logistic sectors, enabling businesses to leverage Vietnam’s growth in a sustainable manner.

The prominent industrial real estate developer initially acquired approximately 250 hectares of land, with an investment of over 300 million USD. In the coming years, KCN Vietnam intends to expand its portfolio, to become one of the leading local industrial real estate platforms. The long-term vision is to be the local champion for their customers’ needs and the right arm for Vietnam’s global expansion as a sustainable industrial hub. 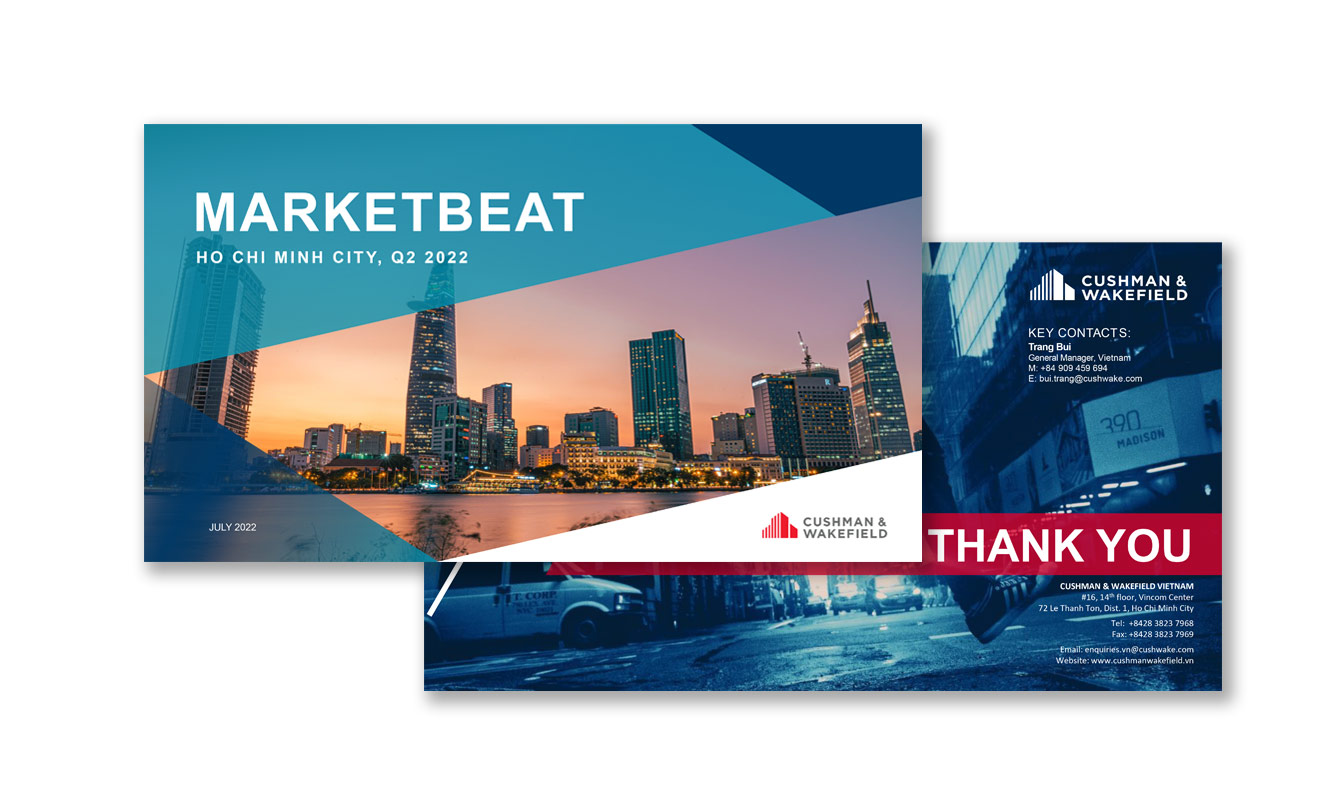 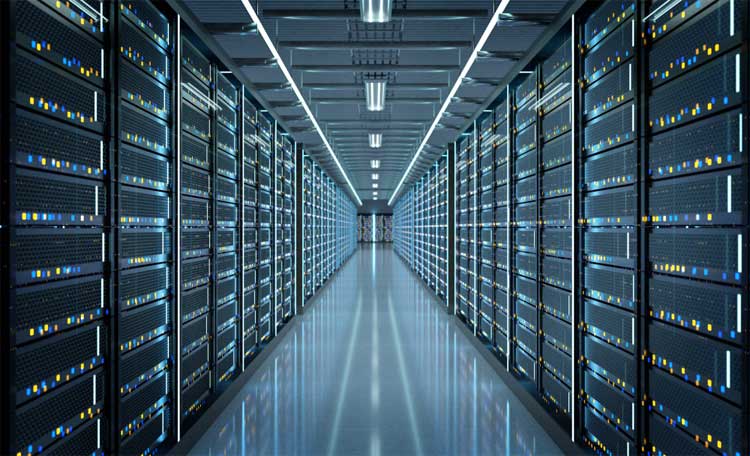 Digitisation wave to boost data centres growth in Vietnam, according to Cushman & Wakefield

Explosive growth in data centre demand has also deepened the sector’s environmental impact., according to a recent report by Cushman & Wakefield 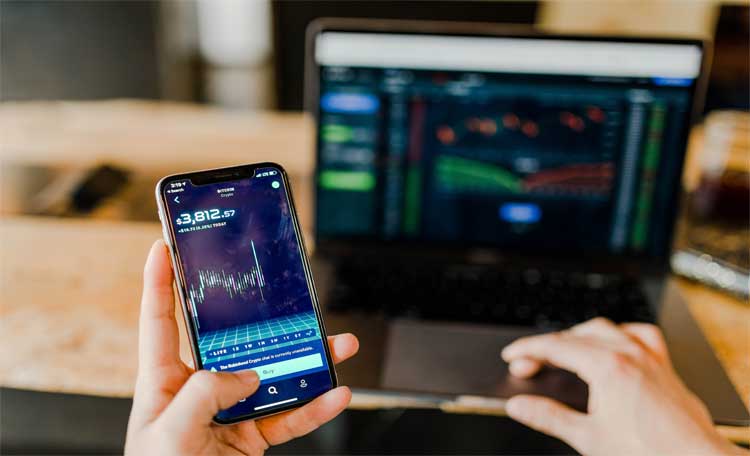 Vietnam among the top choices for global investors, according to a survey by Cushman & Wakefield

In a recent survey by Cushman & Wakefield, India was ranked by just over 60 percent of respondents as their preferred emerging market (excluding mainland China) in which to invest. 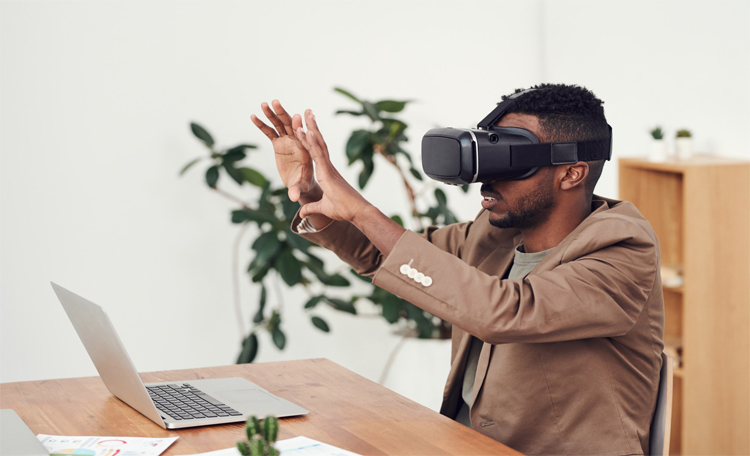 Commercial real estate (CRE) might not be the first thing that comes to mind when we hear “metaverse”. Its definition is quite literally “real” estate, immobile assets that can be touched, in the real world.