Suburban prime retail rents projected to show most resilience in 2020

Retail sales in 2020 could potentially drop by about 7 per cent, as both tourist and domestic spending took a plunge. The decline could be even more pronounced than that during the Global Financial Crisis (GFC) and SARS (see chart below). 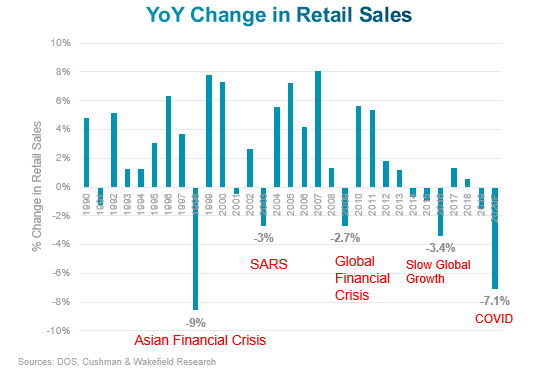 In Singapore, tourist spending accounts for about one-fifth of the total retail sales and the extended travel bans effective 24th March on all short-term travel do not bode well for the brick and mortar retail businesses. In addition, the month-long circuit breaker measures could further exacerbate the pain in retail, as footfall in the shopping malls almost come to a halt.

Prime rents have been relatively resilient as the full impact of COVID-19 has not yet fully materialised. At the end of the first three months of 2020, Orchard Road prime rents fell by 1.4 per cent to $35.27 per square foot per month (psf/mo) and Other City Areas fell by 0.6 per cent to $21.63 psf/mo.

As suburban malls continued to remain open for most trades up until the end of March 2020, prime retail rents were resilient during the quarter. It rose slightly by 0.3 per cent to $31.85 psf/mo. Suburban malls are generally more defensive and resilient in nature due to their dominance in the heartlands, and upcoming supply in the suburban locations is fairly tight. In fact, during the GFC, while Orchard prime rents dropped by 15 per cent from peak to trough, suburban prime rents rose by 1 per cent during the same period.

Mark Lampard, Regional Head of Tenant Representation said “Beyond Covid-19, international brands, particularly F&B brands, are still considering Singapore to build their presence in this part of the world, provided they can find a suitable store location and reasonable rental rates. Leasing activity from other trades were put on hold when the circuit breaker came into effect; these will resume when the measures are lifted.”

For now, the slew of government stimulus packages is expected to help cushion the impact on retailers, one of the hardest hit sectors since the start of the outbreak. The Solidarity package was the most impactful to retailers, including the co-funding of local employee salaries, a 100 per cent property tax rebate for retail malls or the retail components of mixed-developments. Landlords will have to pass on full property tax rebate savings to tenants, which can translate to around 1 month of net rent. Some tenants are also receiving rental rebates from various landlords on top of the 100 per cent property tax rebate mandated by law.

Given the current disruption from Covid-19 is severe, prime rents are expected to fall across the board in 2020. Due to the absence of tourists in the months to come, Orchard Road will see the largest impact on rents which could fall by about 10 per cent in 2020. With circuit breaker measures in place, Other City Areas rents including malls in Marina Centre, Newton, Harbourfront will also be impacted as most of the workforce works from home.

Suburban malls are expected to show some resilience, as consumers would still carry on with necessity shopping albeit at a lower frequency. As the impact of the Covid-19 is likely to be more severe than GFC and SARS, significant government intervention has helped to mitigate some of the negative impact. For instance, the deferment of contractual obligations will allow tenants who have been materially affected by COVID-19 to defer rental payments for up to six to twelve months. This will help alleviate tenant’s cashflow issues and will allow most tenants to continue operating over the short term.

The impact of Covid 19 is having a pronounced effect on retail. The online retailers are seeing a surge in demand whereas smaller retailers who rely on point of purchase sales have been halted. This trend is expected to moderate when the economy begins to open up, but this immediate shift in retail is dramatic and likely result in altering of buying habits in the future.

Christine Li, Head of Research, Singapore and Southeast Asia said “As consumers continue to stay home, food & beverage retailers have had to shift to a total online presence. This will be a good opportunity to stresstest omni channel strategies and last mile delivery logistics which F&B retailers do not often have the resources to experiment under a business-as-usual model. Done well, some F&B retailers might even consider reducing brick & mortar retail space post Covid-19 having been successful at a more online-heavy strategy.”

Beyond the government’s stimulus package and intervention, retailers and landlords need to accelerate their digital transformation in order to strengthen their resilience as consumer behaviour looks set to change. It has never been more pertinent to explore new business models and initiatives that could enhance consumer experience and loyalty.

As Asia Pacific begins to show signs of recovery from COVID-19, led by a rebound originating from China, what is the current status of the commercial real estate market and where is it headed?
Anna Town • 13/08/2021
Your privacy matters to us
With your permission we and our partners would like to use cookies in order to access and record information and process personal data, such as unique identifiers and standard information sent by a device to ensure our website performs as expected, to develop and improve our products, and for advertising and insight purposes.