Cushman & Wakefield Research published our inaugural Prepped Cities Index to evaluate the preparedness of Asia Pacific’s major cities against acute events. Singapore placed first with Melbourne and Shanghai in second and third place respectively. While Tokyo was highly ranked in fourth, the index reveals challenges that Tokyo faces: natural disaster as a building issue, lack of buildings with a globally recognized green rating such as LEED, and weaker preparedness for terrorism.

Natural disasters impact the built environment beyond just urban planning as Japan is widely known as an earthquake-prone country. Through examining past disasters and making improvements, Japan has developed sophisticated emergency protocols and scored comparatively well on the disaster management sub-indicator. The building code was first revised in 1981, in response to the 1978 Miyagi earthquake. In 2000, following the Great Hanshin Earthquake of 1995, the building code was made more stringent. The Tohoku Earthquake in 2011 demonstrated that while buildings can now withstand shocks, there was a clear need to address Business Continuity Planning (BCP) issues.

The majority of clients that require BCP solutions are located generally in Grade A office buildings in the central 3 wards of Tokyo. For BCP purposes, Osaka in the Kansai area, and Osaki which is a little bit closer to home, are typically locations favored for back office operations and network centers. However, in 2011, planned blackouts by the authorities in areas outside the central 3 wards of Tokyo due to the Tohoku Earthquake revealed the need to consider BCP solutions for main offices as well. This was previously not regarded as a concern. As a result, decisions regarding headquarters have become not just about location but about equipping buildings with BCP related specifications, most notably emergency power generation and availability of emergency rations. Responding to this, most major grade A buildings now have emergency generators that supply not just the common areas, but also tenanted spaces with power during emergencies and emergency ration storage. So, the threat of natural disasters is no longer just a matter of urban planning but needs to be addressed at the building level. 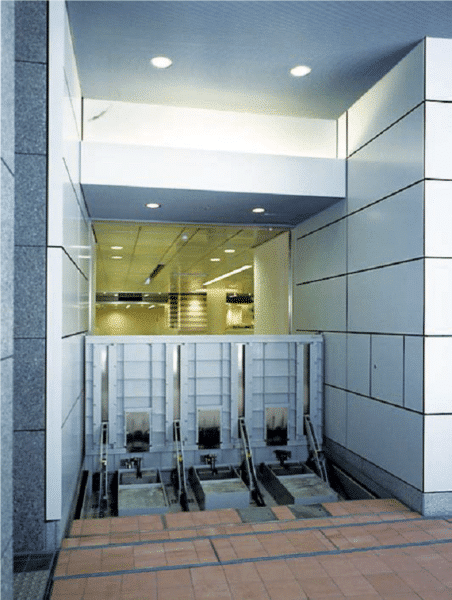 It can be argued that the lower adoption rate of green building certification leads to a less transparent market. While Grade A office buildings in Japan are considered to have met global sustainability standards, many are not certified as it often appears as merely a re-confirmation of market standards at an additional expense. This issue may not appear as significant as the other issues given the higher building standards in Tokyo amid the current landlord-favorable market. However, such markets are still penalized for a lack of market transparency, especially when compared to highly transparent peers such as Australia where green verification is required. This also ultimately means that landlords are required to make extra efforts to identify the greenness of the building for tenants. 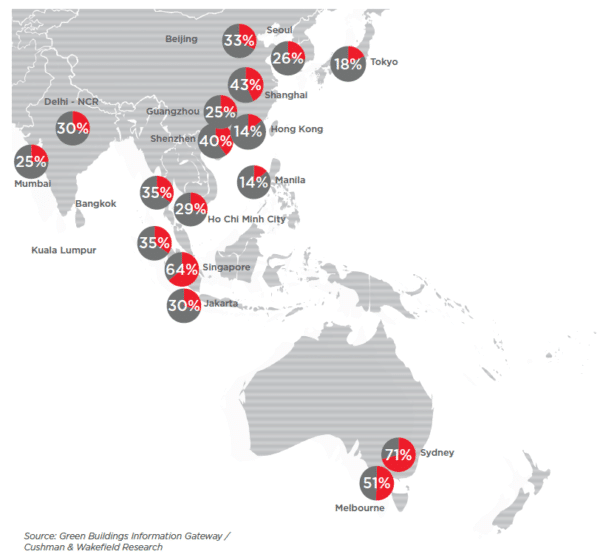 Preparedness for terrorism is a weaker point for Tokyo market. Tokyo is placed in the number one globally for cyber security, forming the National Center of Incident Readiness and Strategy for Cybersecurity (NISC) in 2015. While this also strengthens its digital infrastructure ahead of the 2020 Olympics games, preparedness for Terrorism still remains a significant weak point in Tokyo. The city is one of the major global financial centers with a greater profile; however, the city is also known to be poorly prepared for terrorism attacks with no strong awareness among people. This is unfortunately the same at the building level where some Grade A office buildings do not even have security checks with people freely walking into the buildings, also posing a large implication on industrial espionage for patent-focused corporates such as pharmaceutical companies as investigation for listening microphones is seldom conducted in places like conference rooms. As Japan is generally a very safe country, in order to keep Japan safe from a myriad of ever evolving threats, awareness and forward thinking will become the first line of defense. 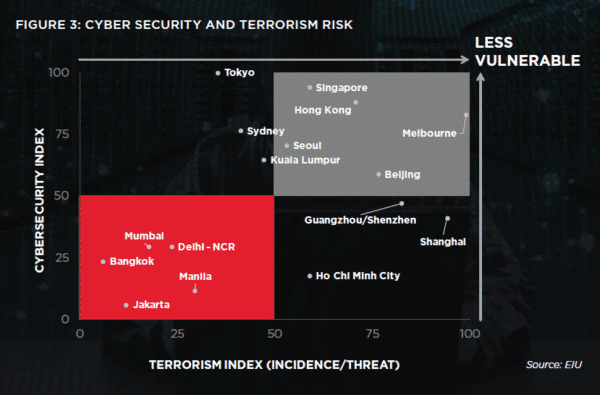 Overall the Tokyo market performed well in the Prepped Cities Index, being placed in the fourth out of seventeen Asia Pacific markets. However, if the market is to cement its place and try to go up the rankings, then it will need to continue to address the weaknesses and maintain the strengths.

The Japanese economy that had been performing behind its Asian peers after its economic bubble (known as “lost decade”) is now reviving under Abenomics, with receiving much traction from multinational companies and global investors, thanks to the current political stability and the greater macroeconomic backdrop.

And here is a simple question to ask landlords in Tokyo — is your building prepared to catch this wave?