In a recent report, Cushman & Wakefield has identified eight city-level markets in Greater China with strong demand for office space throughout the past 12 months.

In every one of these significant city-level Grade A office markets, the October 2017 to September 2018 time period saw office absorption notably rise on a year-on-year (y-o-y) basis.

Provisional on market level supply/demand dynamics in the eight tracked key cities (together with the location and quality of newly completed supply), a diverse picture will persist. As witnessed during the preceding year, vacancy will likely fall in some cities, but could rise in others. An analogous picture should transpire for city-level rental rates.

Here’s a snapshot of the trends driving office demand in each key city.

Domestic enterprises are still the main force behind driving leasing transactions, with transaction volume accounting for 93.3% of total transaction area.

Compared with other sectors, the Technology, Media & Telecommunications (TMT) industry accounted for the majority of all lease transactions, reaching 36.5%. Leasing demand continued to be strong among Internet companies, as they begin to leverage opportunities from the city’s positioning as a ‘National Technological Innovation Center’ and the country’s ‘Made in China 2025’ strategy. From October 2017 to September 2018, leasing transactions from Internet companies accounted for 26.8% of all deals, ranking first among all industries. 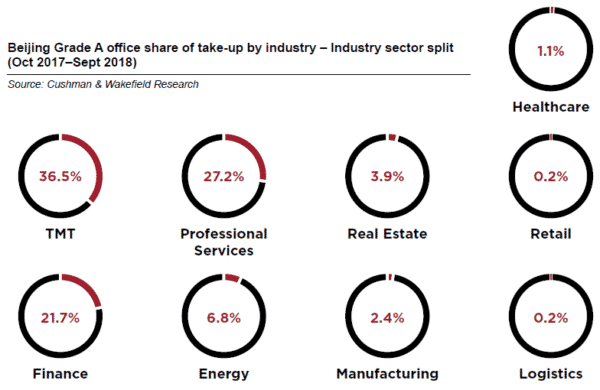 Over the past 12 months, due to the rapid expansion of the co-working market, Shanghai witnessed growing demand from the Professional Services sector, taking a 27.9% share of completed office transactions by area. In this sub-category, with Shanghai being a key battleground for co-working operators, both foreign and domestic, these companies greatly contributed to office absorption by aggressively expanding their office presence in the city throughout the year. The robust growth was not only reflected in the number of newly opened centres, but also in the quality of leased office buildings.

Reflecting on past year prime office demand, nearly 80% of occupier demand by area came from domestic private companies while 20.3% was from MNCs. Looking to the near future, along with Shenzhen’s favourable business environment, we expect MNCs to continue to settle and expand in Shenzhen.

By industry, the TMT sector was the top occupier demand source, amounting to a 36.2% share of leasing by area.

Encouraged by a string of government industrial upgrading schemes and preferential investment policies, more and more TMT enterprises accelerated their process of expansion in Guangzhou.

For leasing deals completed during last 12 months, domestic companies took an 89.8% share by area while MNCs accounted for 10.2%. This was mainly because several domestic co-working operators aggressively took space while MNCs remained conservative in their new setup or relocation.

The Professional Services sector, mainly driven by demand from co-working operators, contributed a 56% share of the completed leasing deals by area. 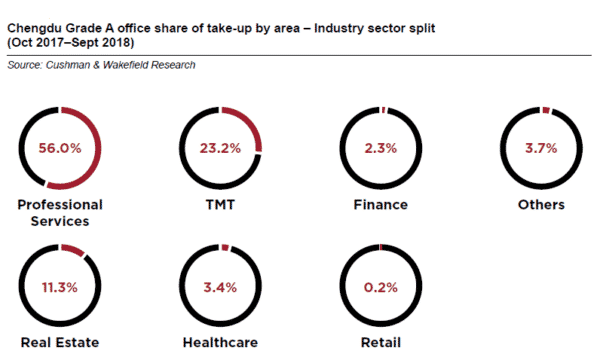 Comprising a 36.8% share of leasing deals by area, and driven by co-working office space demand, the Professional Services sector was the most important demand source for quality office space in Wuhan over the last 12 months. This was quite a change from a year ago as at that time when the Professional Services sector only accounted for a 10.3% share of deals by area.

Slowing demand from Mainland Chinese financial services and securities trading firms in Greater Central saw the share of new leases by area by MNCs improving from 42% (Q3 2017 to Q2 2018) to 56% (Q4 2017 to Q3 2018). MNCs continued to favour newly completed Grade A office developments in non-core areas, such as Hong Kong East and Kowloon East, for cost-savings relocation/consolidation and upgrading purposes.

During the past 12 months, the Grade A office leasing market in Taipei remained stable, with cumulative absorption for year reaching 102,479 sq m. Of this, 69% was rented by MNCs, while the rest was leased by domestic companies (at a 31% share). The average size of leased space was around 2,149 sq m.

In terms of industry sectors, Professional Services, TMT and Manufacturing ranked in the top three regarding area leased during the past year.

Continuing to move forward into 2019, and solely looking at the demand dynamic, we expect office absorption to continue to remain strong.

To get the full data and analysis of the eight key cities in China, download the report here.