Covid-19 has affected office markets across the world due to its economic impact and the advent of mass telecommuting. With office space under-utilised as work from home remains the default, firms are conducting workplace strategy studies to determine their future office needs. In the immediate to short-term, the market is expecting a fraction of space to be returned vacant when occupiers renew their leases.

Prior to the pandemic, office REITs were popular amongst both retail and institutional investors due to their steady stream of dividends and strong returns across the past decade. With the office market continuing to face significant challenges as working from home is expected to remain widespread and a rise in retrenchments resulting in a number of firms giving up spaces, many of these investors are wondering – are office REITs still a viable investment?

While the office market may appear weak, there are still several advantages for office REITs. Due to the market uncertainty in the current economic landscape, firms signing leases desire increased flexibility, which can lead to benefits for office REITs who are willing to accommodate.

For instance, some firms may want to sign shorter leases, which typically command a higher rental rate as compared to longer leases for the same amount of floor space. Office REITs will then be able to increase the rent earlier when these firms renew during the next market upcycle.

Other companies could seek pre-termination clauses which allow them to surrender part of their space before the lease expires. Lease agreements which include such clauses also usually have higher rental rates versus those leases without. With the K-shaped economic recovery under way, office REITs can exercise discretion on which firms they grant these pre-termination clauses to. By only bestowing the coveted clause on firms in sectors within the upper half of the K-shaped recovery, office REITs will be able to reap higher rental rates while significantly decreasing the probability that these firms will exercise the pre-termination clause. It should also be noted that firms would have to pay an additional fee to exercise the clause, reducing the risk to office REITs.


Demand for office space will likely remain resilient in the medium to long-term despite the expectation that a significant proportion of the workforce will continue working from home. Social distancing requirements for each worker to maintain a safe distance from one another will result in the de-densification of the workplace. Even in the longer-term, companies might priority health and safety needs of the employees which could mean that larger square footage per employee is here to stay. This will counter-balance the amount of space reduction from telecommuting.

Workers also face difficulties while working from home. According to Cushman & Wakefield’s XSF@home survey across the globe and Asia-Pacific, half of the workforce feel that personal connections between colleagues are suffering, and they also do not feel connected to their company culture. In addition, more than half of employees reported low levels of energy, well-being, and are not taking enough time away from work. About a quarter of younger workers face additional challenges, struggling with caregiver responsibilities and inadequate workspace.

Most employees believed the optimal balance was not to work from home full time, but only part of the week. Therefore the office will remain a critical driver of culture, learning, and personal connections, resulting in office demand remaining consistent in the years ahead.

The future of work will shift to a total workplace ecosystem with employees working from different locations each day of the week. For some days, workers will utilise the CBD office for key meetings, collaboration, and learning. While in the CBD, they will book on demand event spaces, such as those in co-working offices, as flexible venues for business meetings. On other days, employees will work from home. However, they will not spend the entire time at home, but occasionally make short commutes to local community hubs for a change of atmosphere and to utilise services.

As such, to cater to this new method of working, large firms will seek to open secondary offices in multiple locations across the city fringe and suburban regions. Co-working operators will also open new locations in these areas to serve smaller firms who do not have the resources to open their own secondary offices. This will increase the demand for decentralised office spaces and presents an opportunity for office REITs to fill a gap in their portfolios.

There are already a few decentralised office projects under development by REIT sponsors which could be readily injected into the REITs soon after completion. For instance, Mapletree Commercial Trust could acquire the redeveloped St. James Power Station in the Harbourfront/Alexandra submarket from Mapletree Investments. Meanwhile, CapitaLand could inject Rochester Commons in one-north into CapitaLand Integrated Commercial Trust. Both these properties are slated for completion in 2021.
REITs without sponsor-developed properties also have opportunities to acquire brand new decentralised office properties. Singapore Power is currently developing SP @ Labrador Villa, a mixed-use property with office space above-ground and an electrical substation underground in the Harbourfront/Alexandra submarket which will be completed in 2024. As commercial property management is not its core competency, it is likely that Singapore Power would be open to divesting the office space upon receiving a suitable offer.

In the longer-term post-2024, REITs could also potentially enter into negotiations with government agencies to acquire the future office development at Jurong being developed by LTA and the office component of Punggol Digital District being developed by JTC Corporation.
Another advantage of decentralised office assets is their resilience during economic downturns. While Grade A CBD rents moderated by 7.7% in the first 9 months of 2020, rents of city fringe and suburban properties recorded marginal declines of only 1.5% and 1.6% respectively during the same period. As such, increasing the proportion of decentralised properties in their portfolio would enable REITs to simultaneously provide downside protection and create value for unit holders. 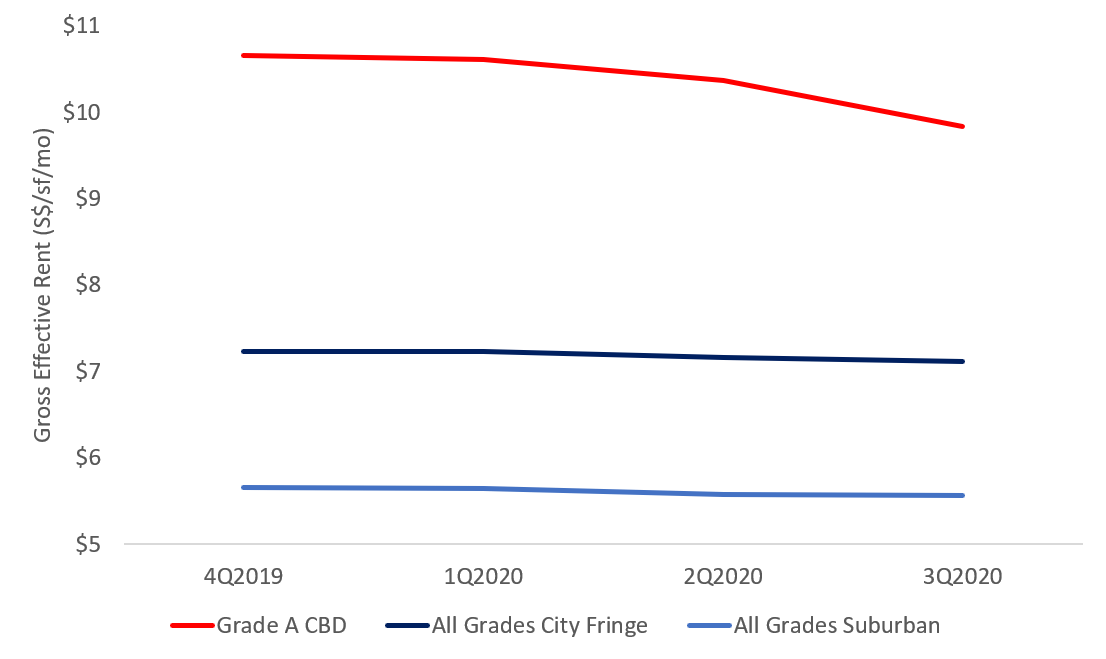 Therefore, despite the challenges faced by the office market in the short-term, the future remains bright for office REITs who are willing to adapt their strategies to meet the changing circumstances of the new office market.