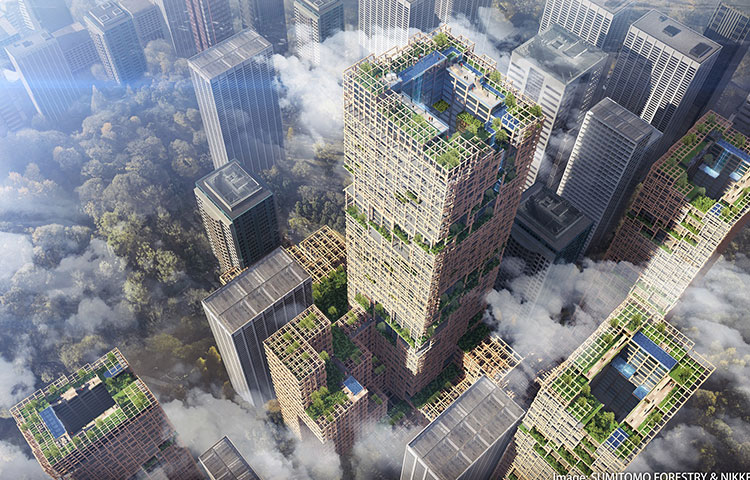 “A long time ago in a galaxy far, far
away, skyscrapers of steel, concrete and
glass stood tall…”

This may be the story you’ll tell your grandchildren decades from now as the construction industry increasingly seeks eco-friendly alternatives to the building materials that compose modern skyscrapers. While there are ideas of bamboo high-rises and bioplastic buildings, plyscrapers — skyscrapers made of wood — are the most feasible alternative.

The first 70-story, 1,148 foot plyscraper is initiating the transformation in Japan, 1,400 years after the country built the oldest wooden building in the world—Horyu-ji Temple in AD 607.

Timber has its advantages

The tallest wooden building structure in the world is the Mjøsa Tower (85.4m/279 feet, 18 floors) in Brumunddal, Norway (to be completed in 2019), followed by the Brock Commons University of British Columbia (53m/174 feet, 18 floors) in Vancouver, Canada. Although these mid- to high-rise buildings can hardly be called skyscrapers, plans for plyscrapers are on the horizon across the globe. Some examples are Japan’s W350 plan or Oakwood Tower in London, a conceptual wooden version of the Empire State Building designed by a Finnish wood product producer.

W350 is a plan put forward by Sumitomo Forestry, a leading timber and building material company. The company aims to build the plyscraper, which will be 90 percent wood, in the city core of Japan. 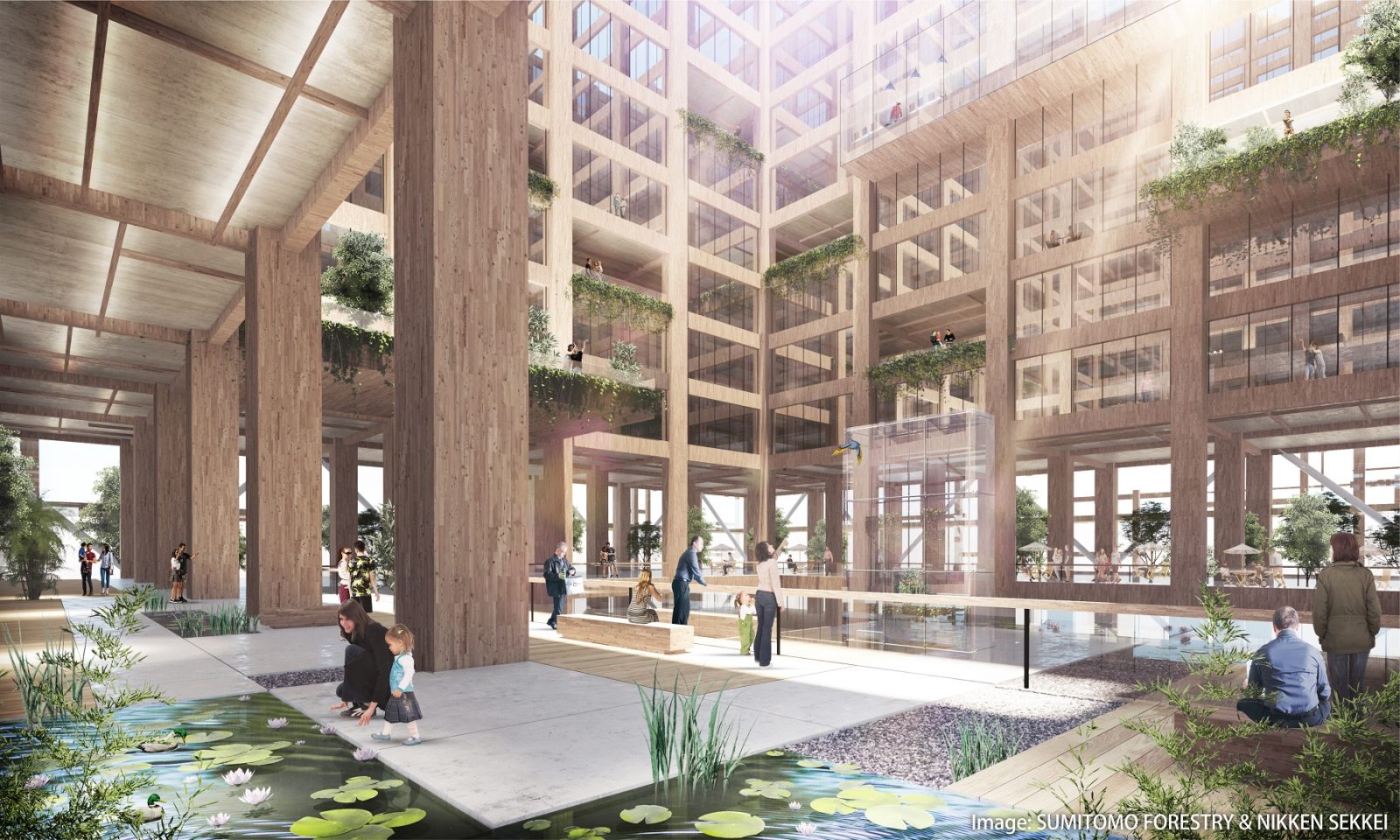 In addition to the use of fire-retardant materials, the plyscraper will consist of elements like fire-resistant trees and water screens. To create a living environment for different creatures, wooden balconies and water features will be included in the building’s design.

Government policy is also in favor of the W350 plan. Seeing a decline in forestry, the Japanese government has been promoting the utilization of timber to revitalize abandoned forests. They also plan to use and showcase timber in the construction of the main facility for the 2020 Tokyo Olympic and Paralympic Games. 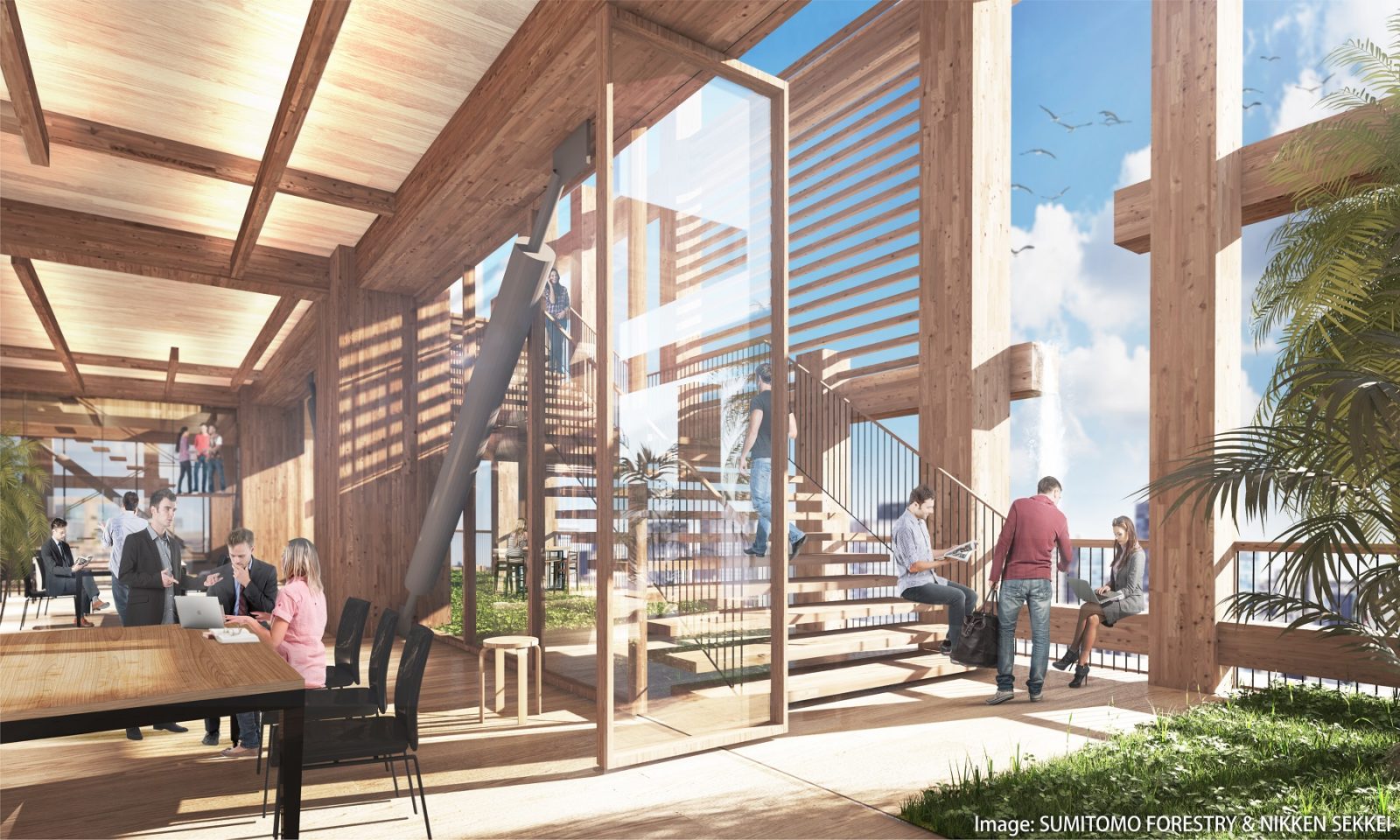 From an economic perspective, using timber reduces the need to import building materials overseas. Although Japan is one of the world’s largest timber importers, it has a forest land rate of 68.5 percent, ranked second of 34 Organization for Economic Cooperation and Development (OECD) member states. As defined by the Forestry Agency, the rate of forest land of each prefecture’s rate of forest land is calculated by dividing the area of forest land by its total area. The government aims to raise the self-sufficiency rate of timber from 28 percent to 50 percent by 2020, and encourages the use of domestic materials through regulation relaxation and support in developing local technology. By actively consuming timber, the government expects the production of timber to increase, accompanying revitalization to local economies and serving as a driving force for Japan’s economy in the future. 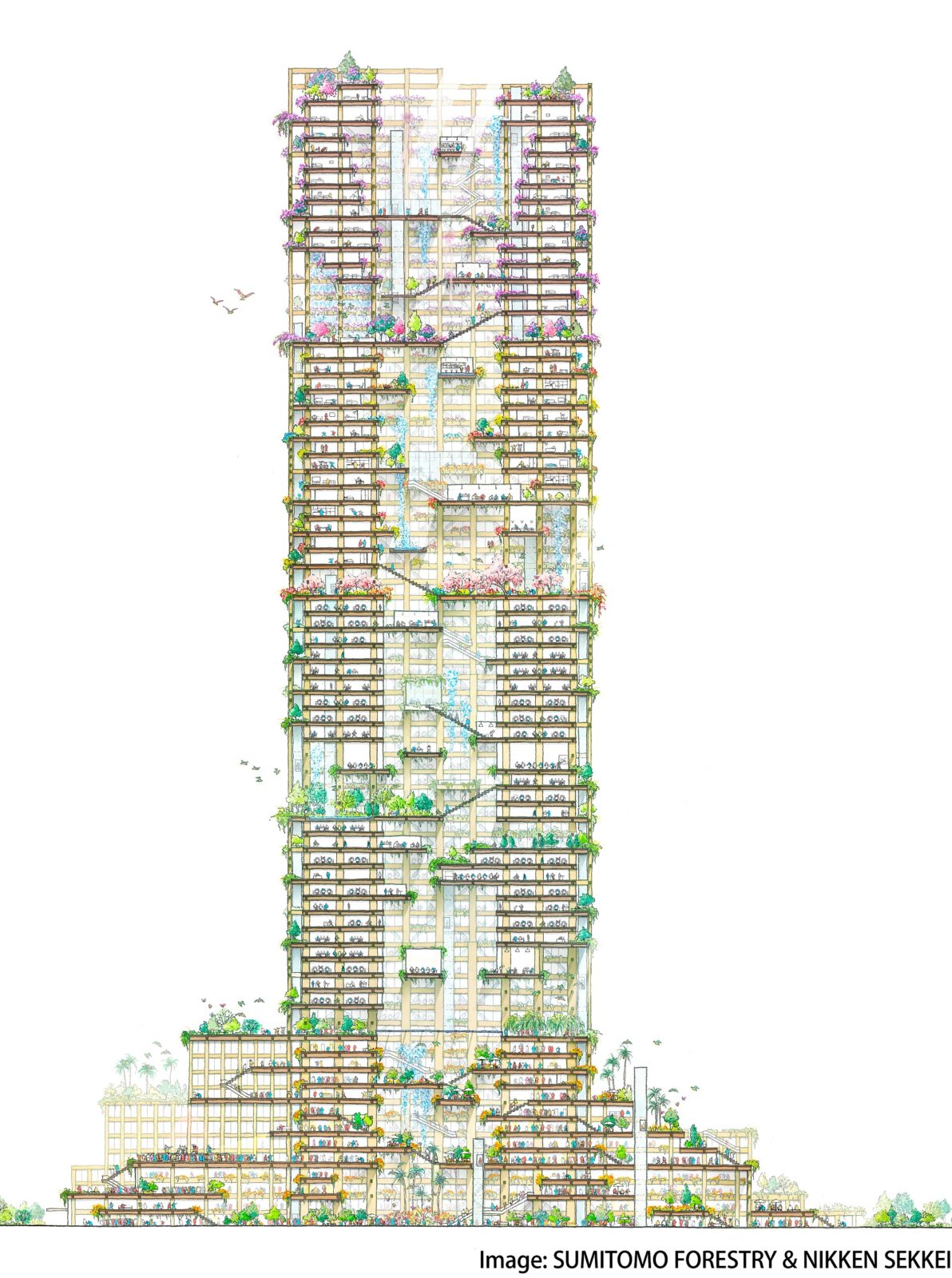 Return of the wood

Reportedly, concrete and steel buildings account for 8 percent and 5 percent, respectively, of carbon dioxide (CO₂) emissions globally. Steel and concrete also contribute to the urban heat island effect: a rise of temperature in city core compared to surrounding suburbs. In addition, steel, concrete and glass require a large amount of energy in its production, transportation and disposal. In fact, 40 percent of emissions by cement is the result of burning fossil fuels for the calcination process. In terms of embodied energy (EE), a calculation of energy consumed to produce a building, wood requires 2.0MJ/kg EE, while concrete and steel require 12.5MJ/kg EE and 10.5MJ/kg EE, respectively—more than five times that of wood. Life-cycle assessment of materials has become a widely adopted practice as more people become concerned with the processing and disposal of a product, and wood has proven to be an organic, environmental-friendly construction material.

Wood serves as a carbon sink, storing up carbon until it is burnt or decomposed. Research shows that constructing with timber from sustainable forests reduces carbon footprints by around one-third compared to steel and concrete. The Wood Innovation and Design Centre of University of Northern British Columbia reduced CO₂ emissions by more than 400 tons by replacing concrete and steel with wood in their own facility. Using timber also reduces a building’s weight and minimizes
foundation and ground reinforcement work. The construction period would also be reduced, saving personnel and equipment rental expenses. With so many benefits, the industry seeks to bring wood to the forefront and has labeled it as a game changer.

Read the full article on p. 22 of The Edge Magazine: cushwk.co/TheEdge