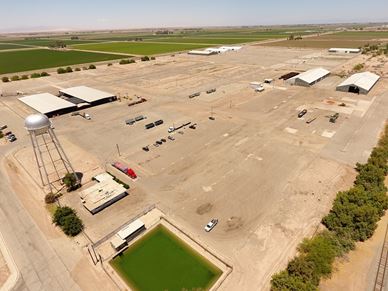 Matt Davis said, “The seller desired to expedite the sale through use of an unreserved auction process. Our team coordinated substantial upfront due diligence work to provide bidders with confidence, and through an expansive marketing effort received more than a dozen bidders on auction day—comprising investors and users from the region as well as those outside the region including out of state. We believe our sales process achieved a strong value for the market.”

Davis continued, “The land benefits from in-place income from existing tenants operating on part of the property, rail access and numerous improvements.

Terry Jackson added, “Consisting of four parcels and currently mainly used for storage, 340 Ralph Road was originally developed as a cotton processing facility. It has since been used for a number of uses, including hay storage, truss manufacturing, dead storage, transloading of raw materials and components for manufacturing in Mexicali, and various agricultural uses.”

The property features a 7-car rail spur on the Union Pacific (UP) line, plus approximately three quarters of a mile of additional track that could be installed on the property to expand the rail component. Approximately 75 acres of the site has chain link perimeter fencing with two main access gates and a third gate at the rail spur.

The property also benefits from many incentive programs, including New Market Tax Credit (qualifies as a severely distressed area), Foreign Trade Zone, and others.