Cushman & Wakefield Strengthens Valuation & Advisory Practice in Seattle with the Addition of Scott Biethan, Julian Rondello and Keenan O’Leary to the Team

SEATTLE, Wash., September 13, 2021 – Cushman & Wakefield has hired preeminent valuation professional Scott Biethan, MAI, FRICS, CRE to their Valuation & Advisory practice in Seattle. Biethan, a lodging expert, will focus on assisting with business development and recruiting, and on growing his hospitality practice in the Pacific Northwest. 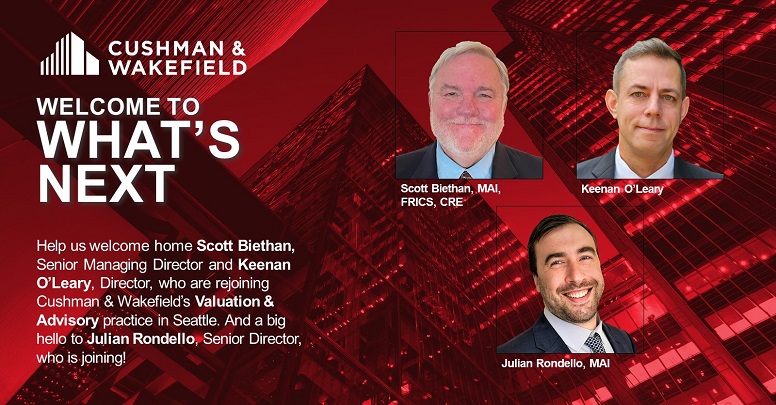 Biethan returns to Cushman & Wakefield after working at the firm for nearly two decades between 1986 and 2005. He was a commercial real estate appraiser and consultant specializing in hotels before being elevated to the role of City Lead for Cushman & Wakefield’s Seattle office. Biethan rejoins Cushman & Wakefield from McKee Appraisal Real Estate and Consulting in Seattle, where he was a Principal.

“We are ecstatic to be welcoming Scott back home to Cushman & Wakefield,” said Robert Skinner, Executive Managing Director and U.S. Lead, Valuation & Advisory with Cushman & Wakefield. “Scott is a proven leader and talent within the industry and is also one of the brightest and most respected authorities in the hospitality sector.”

The firm has also added to its V&A roster in Seattle veteran appraisers Julian Rondello, MAI, and Keenan O’Leary. Rondello will focus on institutional assets with a concentration on the Class-A office sector, while O’Leary will specialize in the hospitality sector.

Michele Kauffman, MAI, Chief Operating Officer, Americas, Valuation & Advisory for Cushman & Wakefield, added, “We are so excited that this talented trio of Scott, Julian and Keenan are joining us in Seattle. They are each tremendous professionals and their decisions to join our team demonstrates that Cushman & Wakefield is the workplace of choice for exceptional valuation talent.”

“The Puget Sound is a significant and dynamic commercial real estate market, and adding seasoned V&A professionals such as Scott, Julian and Keenan to our local office will go a long way in enhancing our client offerings and capabilities here in the region,” expressed Alison Beddard, Cushman & Wakefield’s Managing Principal for Washington state.

Biethan has worked on large and small real estate assets in a wide variety of locations. He has provided valuation, consulting, litigation and other services for a diverse client roster. Prior to his work at McKee Appraisal, he was a Senior Managing Director at CBRE from 2005 to 2016 where he oversaw the firm’s Pacific Northwest Valuation Services Group. He was also part of national leadership for CBRE’s Hotel Valuation group.

Biethan attained his MAI in 1992, volunteered in several local Appraisal Institute chapter positions, and in 2003/2004 was elected as the President of the Seattle AI chapter. He has served on the national Board of Directors for the Appraisal Institute and holds the Counselor of Real Estate (CRE) designation as well as the FRICS designation (a Fellow in the Royal Institute of Chartered Surveyors). Biethan previously served on the Americas Board for RICS, and currently serves on its Global Valuation Board.

Scott Biethan said, “It is with great enthusiasm that I am returning to Cushman & Wakefield, which offers a world-class, full-service platform that will greatly contribute to my business. I look forward to working closely with our V&A team to provide superior service and knowledge to our clients and engaging with the industry’s premier talent.”

Rondello joins Cushman & Wakefield from McKee Appraisal where he was a Senior Appraiser and Director of IT. Prior, he served as an AmeriCorps VISTA within the City of Portland Mayors Office. Rondello possesses expertise in the valuation of complex income-producing properties owned by institutional investors, providing analysis that is internally consistent over several years. As part of his practice, he frequently represents both property owners and governmental agencies in appraisal and litigation support for eminent domain and condemnation proceedings.

Rondello attained the MAI designation in 2020 and volunteers for the Seattle chapter of the Appraisal Institute Annual Fall Conference Meeting. He graduated from Western Washington University with a Bachelor of the Arts Degree in Economics & Political Science and a minor in Business Administration.

Prior to Cushman & Wakefield, O'Leary spent his entire 20+ year career in hospitality operations and real estate finance. During his initial employment at Cushman & Wakefield as a Director in the firm’s New York and Seattle offices from 2010 through 2015, O’Leary valued over $5 billion in hospitality assets. Prior to rejoining Cushman & Wakefield’s Hospitality & Gaming practice, he was Director of Investment Analysis at American Life, Inc., one of the largest EB-5 developers in the U.S.. During his tenure, he structured foreign investor offerings for new development projects, restructured existing investments and capital improvement plans, and standardized valuations for the company’s entire portfolio of industrial, hotel, retail and office properties. O’Leary is a graduate of both Cornell University’s School of Hotel Administration and the Culinary Institute of America.