While the office sector continued to dominate transactions, rising 15.9% from $22.0 billion in 2018 to $25.4 billion in 2019, investment in alternative asset classes jumped 42% to $8 billion in the same period. Deal activity in alternatives accelerated in the second half of 2019, led by significant transactions in the student accommodation and fuel and convenience sectors.

This included the sale of the Urbanest Student Accommodation Portfolio to Scape Australia for $2 billion – the largest transaction in 2019 - Charter Hall’s acquisition of BP’s fuel and convenience retail portfolio for $840 million, and Scape Australia purchasing the Altira Student Accommodation Portfolio for $700 million on behalf of Alianz and AXA.

Industrial assets also continued to enjoy strong investment demand, supported by tailwinds in the transport and logistics sector, and e commerce growth. As a result, assets remained tightly held, leading to a 4% reduction in yearly investment volumes to $5.2 billion in 2019. Retail investment volumes were also down 21% to $6.8 billion following a decline in the depth of purchaser demand. 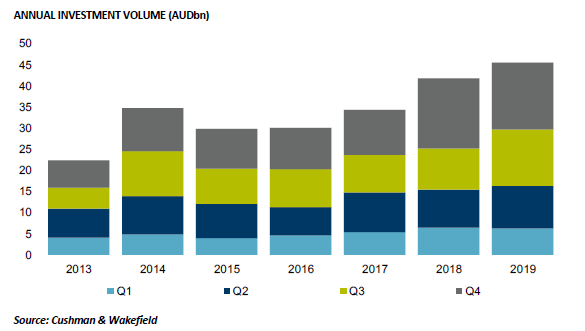 “We saw overall investment volumes post their strongest calendar year to date, albeit lower than the rolling annual peak seen at the end of Q3. We view this as an indicator that the capital growth cycle has likely peaked, but we remain confident that Australian commercial property remains relatively good value and transaction volumes should remain high throughout 2020.”

Foreign investment continues to target office, industrial sectors Australia’s relatively stable economy, transparent market and relative value continue to drive heightened demand from foreign investors with $19 billion in investment coming from offshore in 2019 - 42% of overall investment volume. While this was the strongest calendar year on record, foreign investment fell from its peak of $20.7 billion in Q3 2019 in rolling annual terms.

Singaporean investors remained the number one net purchaser of Australian commercial real estate assets for the third calendar year in a row ($2.68 billion), while significantly increased investment from Hong Kong (up 117% to $2.43 billion) and Germany (up 650% to $1.14 billion) secured their spots in the top three. During 2019, China remained a significant source of investment capital with the third-largest investment volume of any offshore jurisdiction at approximately $2bn. Given Chinese investors also divested $1.2bn, this meant that they ranked number as a net purchaser.