In 2011, the government of Japan designated special districts for accelerating urban redevelopment within prime cities across the country, to improve their global commercial competitiveness. In the port town of Fukuoka, the city core area has been selected and two big projects are on-going.

The first one is named Tenjin Big Bang, a project started by Fukuoka city in response to the strategic special zone initiative of 2015. It covers approximately 80 hectares in total, in an area around a 500-meter radius of the Tenjin intersection. Within the area, regulations such as building height and floor area ratio are relaxed, making it possible to build 100-meter-tall high-rises. The city aims to redevelop 30 old buildings until 2024, when the relaxation expires, and expects to create an additional 313,000 sq.m. of office space and 2.4 times as many jobs in the area. The estimated economic impact is an annual 850 billion yen by the time all the new buildings are complete. One of the highlights is the redevelopment of the former Daimyo Elementary School which will house the luxury hotel Ritz-Carlton and have MICE facilities and retail spaces in addition to office floors.

Hakata Connected is a second redevelopment project officially started in May 2019, with relaxed construction regulations within an area of a 500-meter radius extending from Hakata station. Since the opening of Kyushu Shinkansen in 2011, the importance of the Hakata terminal area is increasing. Several shopping malls such as JR Hakata City and Kitte Hakata have opened. In 2019, Fukuoka city called for the redevelopment of 20 old buildings within the next 10 years. JR Hakata City is planned to expand southwards to include office, hotel, retail floors. The project also aims to improve pedestrian connectivity around the station, strengthening its position as the gateway and destination for inbound visitors. 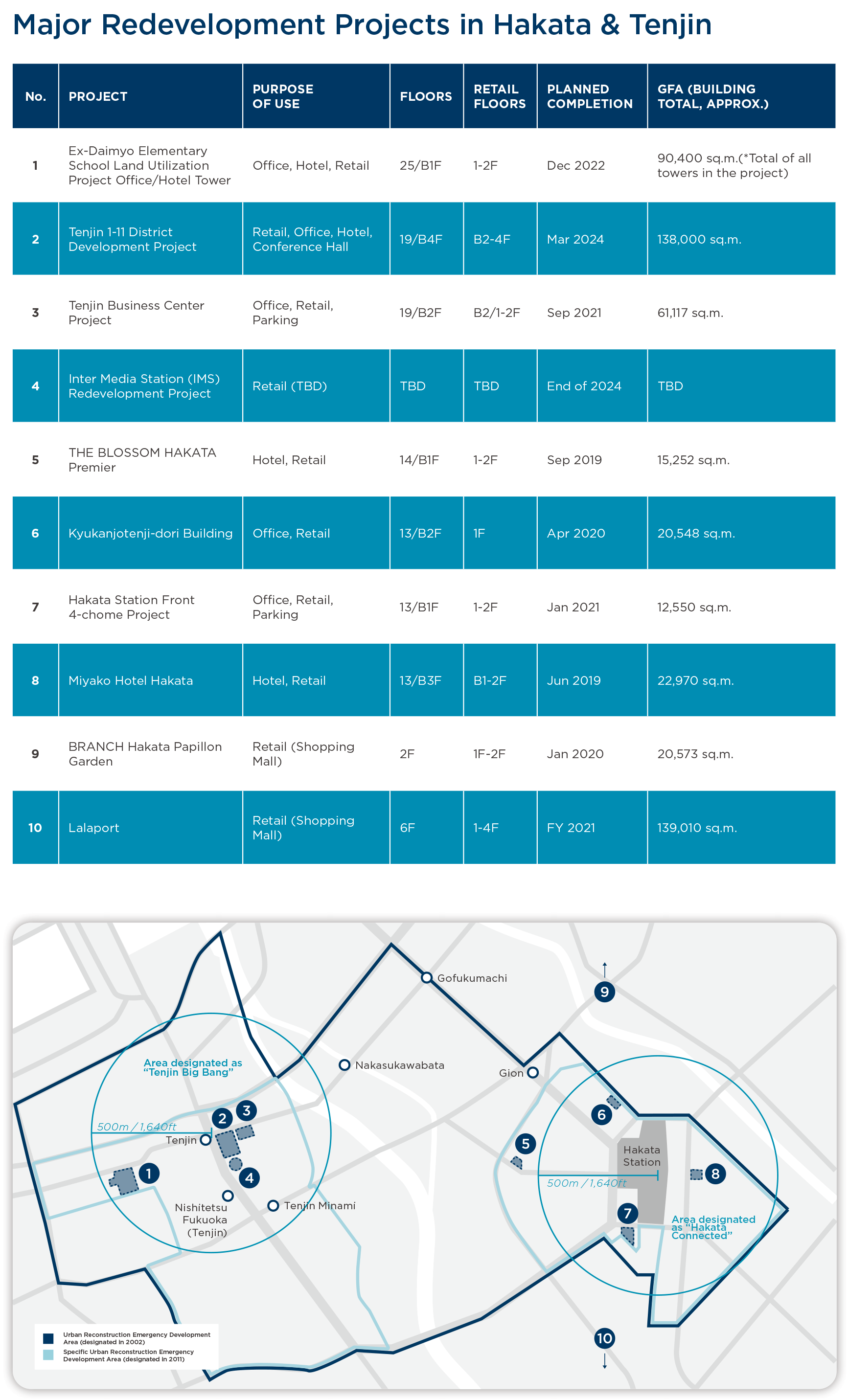 Other Development Projects in Fukuoka

Fukuoka is transforming itself into a modern port city. In addition to redevelopments in the two major core areas, Fukuoka has some development projects planned to equip itself for post-Olympic tourism opportunities.

The most prominent of these projects is the extension of the Nanakuma Line metro to form a second link between Tenjin and Hakata. Fukuoka city is extending the Nanakuma Line from its current terminal of Tenjin-Minami, on to Hakata station. It will stop at Canal City Hakata, a famous shopping mall for inbound tourists, but until now without a metro connection. Moreover, with the completion of the extension in 2022, the Nishi-ku ward of Fukuoka will connect directly to the Hakata hub station, improving accessibility to long-distance trains.

In the same year, Kyushu Shinkansen is scheduled to open a new Nishikyushu route connecting the 143km between Hakata station and Nagasaki station. Nagasaki is another popular destination for cruise tourism, ranking as the fourth busiest port in Japan in 2019. The journey between the two cities will take just 82 minutes, cutting 26 minutes from the existing route. The connection will further strengthen Fukuoka as the tourism hub of Kyushu region.

The road connection to Fukuoka Airport will be strengthened. Route 3 Airport Line, a short expressway connecting the ring road to the airport, will be extended by 2km to the airport’s entrance. It is expected to alleviate existing congestion at the Route 3 intersection. Driving time will be reduced by five to ten minutes.

Envisioning future working and living environments, Fukuoka City has two projects along the Hakata Bay. Island City is a new town project initiated in 1994 on a 401.3 ha area of reclaimed land, with designated areas for a container port and related facilities including research and business incubation, and commercial and ecofriendly residential spaces. In March 2020, a multi-complex named “island eye” opened in a 7.5 ha area of land comprising a hotel, MICE facility, shopping mall and theater. The city aims to attract tourists to venture further from the city center.

In Hakozaki district, a smart city project named Fukuoka Smart East is in the pipeline. The location is the former Hakozaki Campus of Kyushu University, and the approximately 50ha of land will become an experimental city with IoT infrastructure including auto-driving cars and drone delivery services. The project is expected to be a model case to adapt to Japan’s aging population. The project proposal is set to begin in 2020 or later. 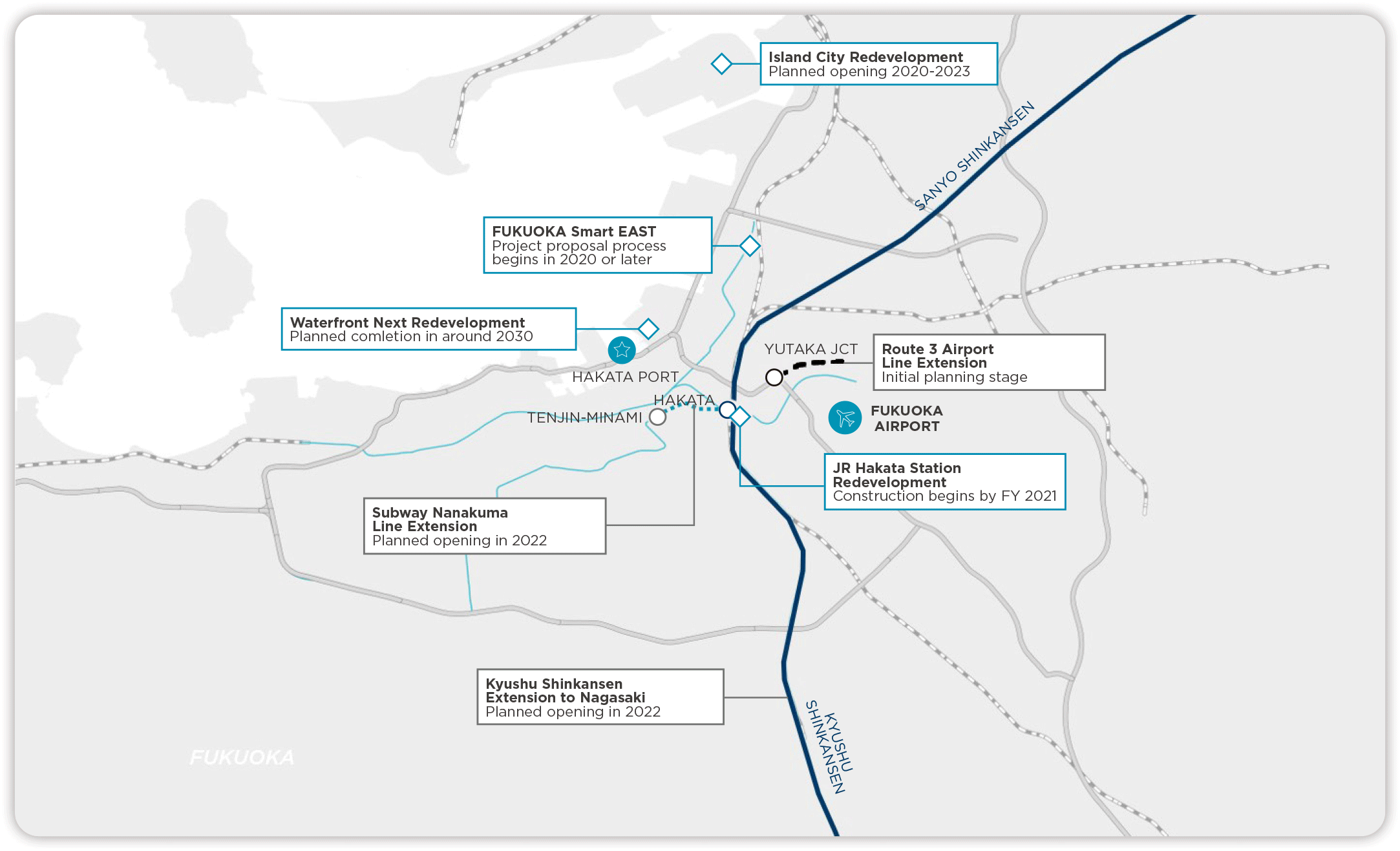