While preparing to join Tokyo and Osaka into a single mega region with the new SCMaglev train, Greater Nagoya also sees the need to strengthen its position as a hub city in Central Japan. Although the official opening date of SCMAGLEV is now expected to be postponed, a move to strengthen its position in the Chukyo region is underway. In terms of tourism, MICE, cruise tourism, and theme park are the sectors Greater Nagoya is working on.

In August 30, 2019, Aichi Sky Expo opened next to Chubu Centrair International Airport. The 60,000 sq.m. hall is the first exhibition center in Japan which connects directly to the airport and comes with a dedicated customs-free zone.

In the coming future, the Nagoya International Exhibition Hall In the port area, known as Portmesse Nagoya, is under redevelopment. The First Exhibition Hall will be relocated to a nearby plot in front of Kinjo-futo station in October 2022, expanding the GFA to 20,000 sq m in total. It will also incorporate a concert hall, volleyball and basketball facilities. The Second and Third Exhibition Halls are scheduled to reopen in 2026. The total area of the three buildings will be expanded from 34,000 sq.m. to 60,000 sq.m. An extension of the Mei-Nikan Expressway, which runs around the radius of 10 km from the city center, to the Port of Nagoya will further increase the accessibility of Portmesse Nagoya.

Yokkaichi Port in Mie prefecture is a major cruise ship port in Greater Nagoya, alongside Nagoya Port. The Tokai-Kanjo Expressway, which connects the Chukyo area, is scheduled to open westward in 2026, and is expected to improve access from Yokkaichi Port to tourist destinations such as Takayama City in Gifu Prefecture, where there is a historical street scene. Cruise passengers calling on the Port of Yokkaichi will be able to enjoy more fulfilling excursions. Greater connection of Japanese ports will also bring positive spillover effects to the logistics sector. 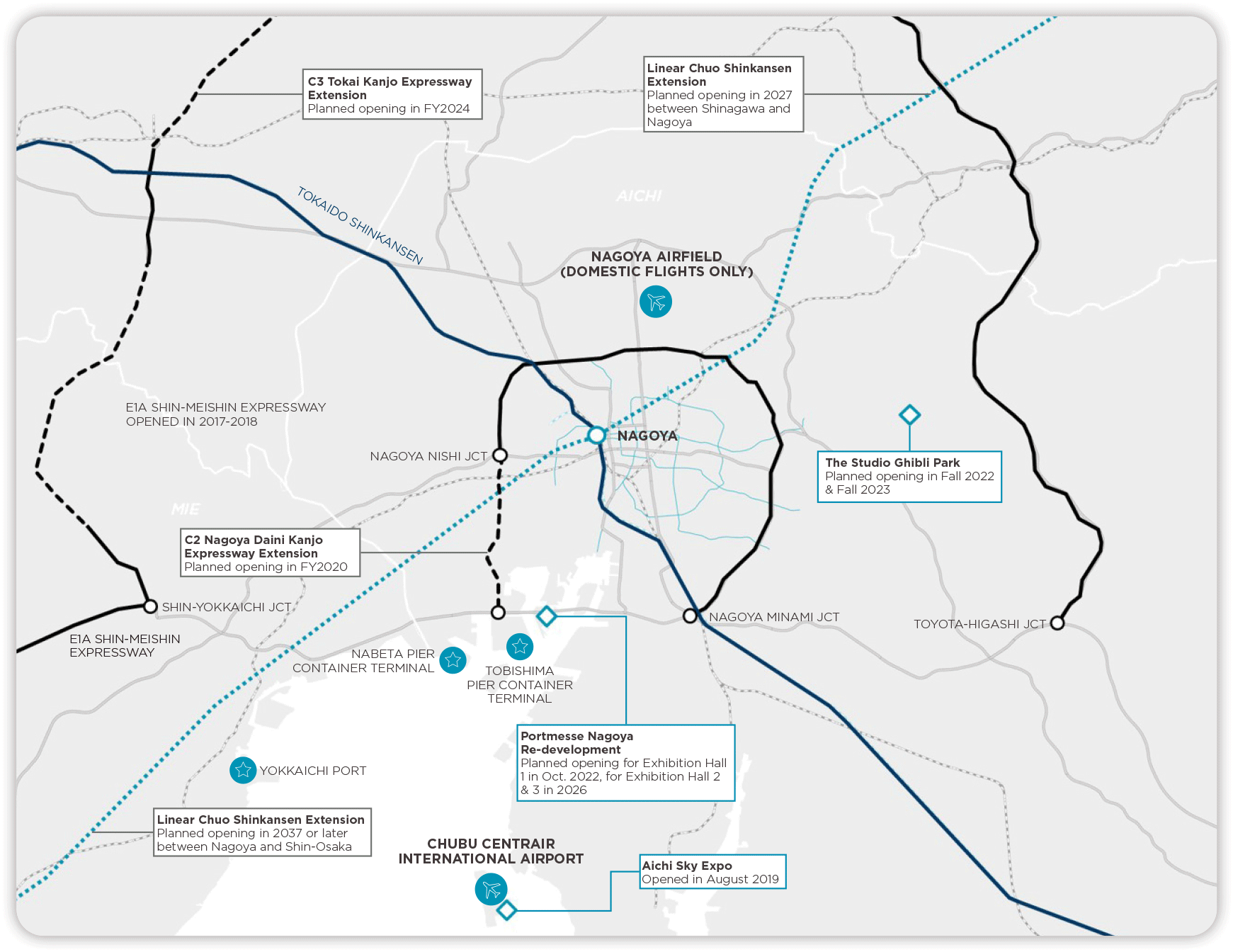 In March 2019, Moominvalley Park, the theme park about the Moomin characters long-beloved by Japanese, came to Saitama prefecture. In December, the revamped Snoopy Museum Tokyo opened in Machida, and Harry Potter theme park is set to open in Nerima in Tokyo by the spring of 2023. Aichi prefecture has announced it is to build a Ghibli Theme Park with Hayao Miyazaki’s Studio Ghibli and Chunichi Shimbun, turning one of the most well-known Japanese anime cultures into a tourism asset.

Studio Ghibli Theme Park, scheduled to be opened in the fall of 2022, has a site area of approx. 200 hectares and comprises five theme areas. Located in the Expo 2005 Aichi Commemorative Park, the former site of the 2005 world’s fair, Studio Ghibli Theme Park will revitalize facilities in the park and create a space that tells both Ghibli’s tales and the story of Aichi Expo 2005.

Greater Nagoya’s Ghibli Park is not the first facility by Studio Ghibli. Ghibli Museum Mitaka opened in Tokyo in 2001. The museum has only 0.4 hectare (1/500 of the planned Ghibli Park) but attracts more than 700,000 visitors annually. The Studio Ghibli Theme Park is expected to be able to draw Ghibli fans from around the world. In terms of visitor expectations, Kyushu’s Huis Ten Bosch of a similar scale recorded 2.7 million people in 2018, although the Park does not publish an official target.

Although five themed areas have been planned, Ghibli Park has indicated that expansions and renovations will continue after the opening. The Ghibli Park will certainly become a major tourism asset in Post-Olympic Greater Nagoya, especially after the maglev train opens, bringing tourists from Shinagawa Station in Tokyo to Nagoya Station in just 40 minutes. 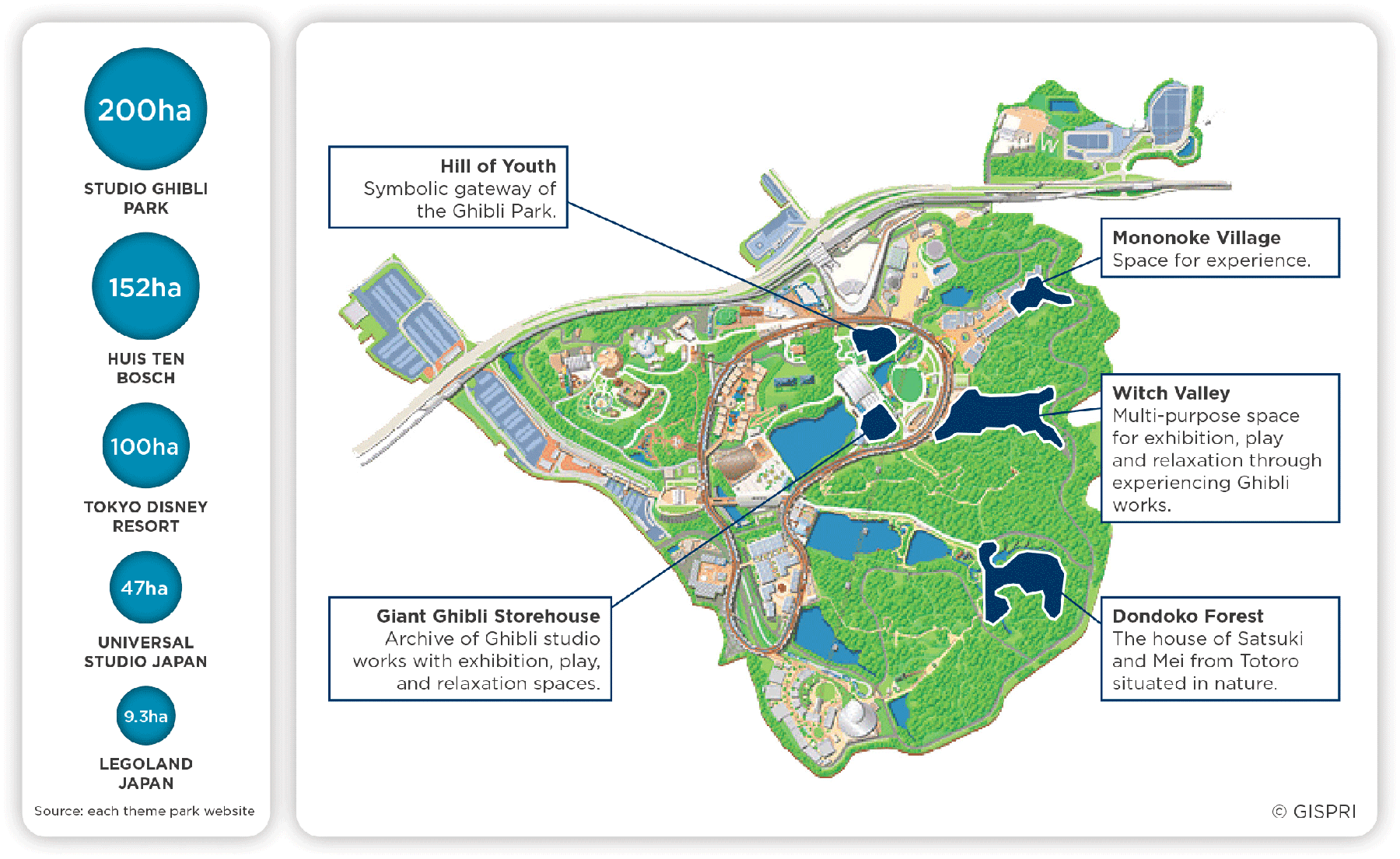