Shinagawa station will be the Tokyo terminal of the new SCMaglev line. With direct access to the future SCMaglev train and its proximity to Haneda Airport, the area around Shinagawa station is positioned as an “international exchange hub which will lead economic growth” by the government. It will also serve as the gateway and the connection point for overseas visitors.

Shinagawa station is established as the southern gateway to the Tokyo metropolis. It is one of the busiest stations in Tokyo, with the airport express train and Shinkansen passing through. The government has planned additional transport infrastructure ahead which will further consolidate Shinagawa as the gateway to Japan and to Tokyo. The first phase of the SCMaglev train is scheduled to open between Shinagawa and Nayoga, and will become the backbone of the Super-Mega-Region concept. Haneda Airport is repositioning from a domestic to an international aviation hub, with additional capacity of 50 international flights per day added. Once the effects of COVID-19 subside, the airport will be able to meet further inbound demand. The area will be also be more accessible to Tokyo city center, with a planned subway extension to Shinagawa and an integrated transport interchange for taxis and local and long-distance bus services. 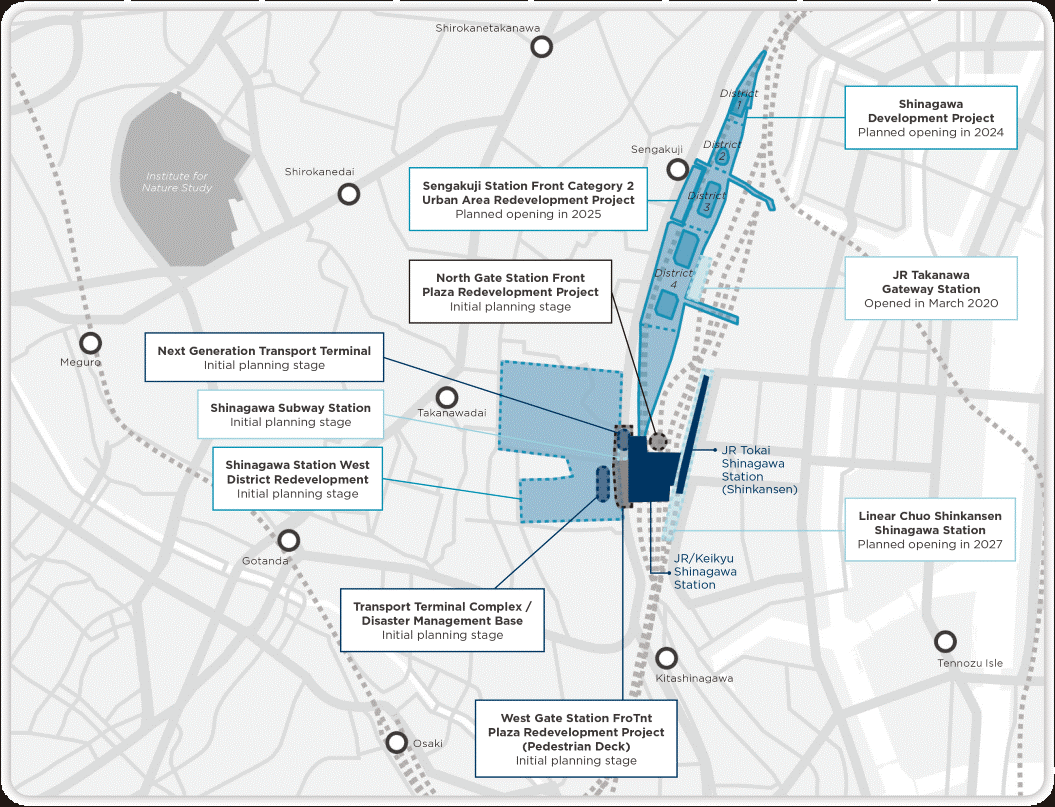 A Global Town Launching in 2024

Shinagawa was designated as a Special Zone for Asian Headquarters by the Tokyo Metropolitan Government in 2010. It enjoys benefits including supportive legislation to stimulate the provision of services to an international community, such as medical, educational, and residential concierge services, helping to create a favorable ecosystem for global entrepreneurs.

The first phase of a new global town on the north side of Shinagawa station will be opening in 2024. It will further enhance the area as an international hub and center for MICE-related tourism. The development is planned by JR East Japan and New York-based design firm Pickard Chilton. Based on the ‘Global Gateway Shinagawa’ concept, a 9.5-hectare former rail yard will be transformed into a pedestrian-friendly global town. The inclusion of convention and conference halls, exhibition spaces and incubation laboratories help to differentiate it, forming an ecosystem that fosters international exchange and attracts MICE-related tourism to the area. International-standard retail facilities, hotels and short-stay residences are also included in the town. Phase one, with four tower blocks, is scheduled to open in 2024 and the rest of the development will be included in phase two.

Takanawa Gateway station on the JR Yamanote Line, at the entrance of the new global town, has opened in March 2020. The new station is designed by world-renowned architect Kengo Kuma and features wood as a construction material to reflect Japanese aesthetics.

The adjacent Sengakuji station on the Toei subway and Keikyu line is also planning to redevelop its station building. The new mixed-use complex will house office, retail and residential floors, and is scheduled for completion in 2025. Additionally, the area west of Shinagawa station is planned for redevelopment into an international business district with MICE facilities.

When the Shinagawa Development Project is complete it will be possible to walk uninterrupted through the global town from Takanawa Gateway station to Shinagawa station and further to the station west-side renewal project, forming an extensive neighborhood.

To facilitate movement the government has decided to build an above-ground pedestrian deck, linking Shinagawa station and the station west redevelopment area, and with a next-generation transport terminal. It will act as a showcase for Japanese urban mobility, with self-driving electric cars, connected vehicles and personal mobility devices such as hoverboards and motorized scooters.

The new pedestrian deck is still at an initial planning stage but is viewed with enthusiasm as a new icon of Shinagawa. The grand structure will bridge over the six-lane National Route 15, also known as Dai-ichi Keihin Avenue. The deck is planned to house a retail complex with public spaces as well as the aforementioned next-generation mobility hub. As well, the facility will serve as a base for disaster-response management.

Each transportation service, from last-mile mobility solutions to intercity transit routes, will be clearly accessible in designated space. Shinagawa station is evolving into a welcoming mobility hub for both locals and international visitors.