The city of Brisbane has registered the greatest increase in landlord favorability for Australia office leasing over the last year, according to the latest survey by Cushman & Wakefield.

Positive sentiments around Brisbane from the landlord respondents grew from a year ago, with landlord confidence in the capital city up 10 points year-on-year. The figure for Sydney remained stable, while Melbourne increased by four points to pip Sydney for the highest level of business confidence out of the three cities.

For the past two years low vacancy rates in Sydney and Melbourne have allowed landlords to become less flexible in their negotiations. In Brisbane, landlords retained a flexible approach to negotiations given the tenant-friendly market.

Year-on-year Sydney tenants have become less willing to negotiate, particularly on lease term and make goods, closely followed by incentives. Landlords on the other hand have become slightly more flexible, possibly due to a reduction in number of larger tenants in the market and an increase in the number of speculatively fitted suites.

While Brisbane relies almost exclusively on the Government sector for tenant demand, and Sydney leans on demand from the Information Media and Technology industry, it is Melbourne that stands ahead of the pack with a broad base of tenant demand. No fewer than five industries (Government, Professional services, Information Media and Technology, Finance & Insurance, and Education) exhibit strong demand for space in Melbourne, something that puts landlords in a strong position.

The key areas of tenant concern to emerge from the survey related to value, talent attraction and retention, and future-proofing. Ultimately tenants are committed to seeking value for money, with decisions such as moving to more expensive CBD premises from suburban locations driven by the desire for more modern, flexible workplaces where occupancy rates can be lifted. Staff attraction and retention is also front of mind, with proximity to transport links a key priority, alongside ensuring that premises can adapt to rapidly changing work practices and technology. 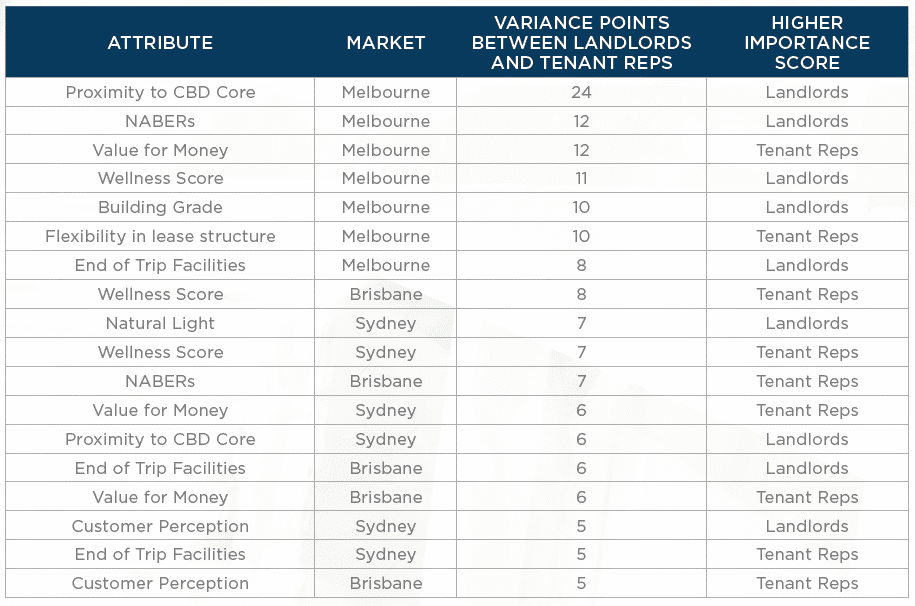