Inflows from foreign institutional investors – namely equity and pension funds, insurance, sovereign wealth funds among others – into Singapore over the past three years between 2016 and 2018 year-to-date (YTD) amounted to $5.3 billion in transaction value, almost five times that of the $1.1 billion during the preceding six years between 2010 and 2015. The return of confidence points to sound fundamentals in Singapore real estate. Investors with a long-term view are fully cognizant of the value that Singapore real estate offers, beyond the vagaries of cyclical price movements and cooling measures.

In 2015, foreign institutional buyers stayed out of the market due to weakness in the Singapore office sector. Supply overhang, coupled with a sub-two per cent GDP growth took a toll on the commercial property market with office and retail rental sliding and vacancy rates rising. Weak demand persisted into the early part of 2016 from the occupier end despite some early shoots of recovery in the global economy. 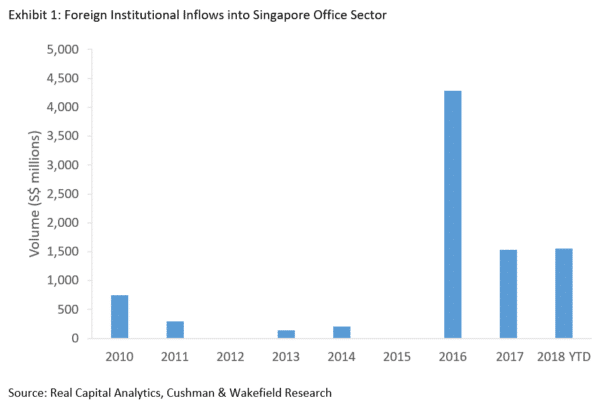 The charge in 2016 was led by Qatar Investment Authority’s acquisition of Asia Square Tower 1 for $3.4 billion. Subsequently in 2017, Manulife purchased PWC Building for $747.0 million, and FWD bought a 50 per cent stake in One George Street for $591.6 million.

The upswing in momentum continued in 2018. Notable sales include AEW’s purchase of Twenty Anson and 55 Market Street for $516.0 million and $216.8 million respectively. Most recently, it was reported that PGIM is acquiring 78 Shenton Way for approximately $680.0 million. In addition, BlackRock’s recent purchase of 7 strata units in Prudential Tower for $130.1 million is a testament to the faith of foreign institutional investors in the strength of the strata office market.

Despite the Federal Reserve’s continued rate hikes, appetite for yield seems to have retreated going by the capitalisation rates (cap rates) that were concluded in recent deals. While Asia Square Tower 1 and One George Street were transacted at a 3.2 per cent cap rate in 2016 and 2017 respectively, the sale of Twenty Anson in 2018 was at a lower cap rate of 2.7 per cent. It is clear that investor demand for Singapore office assets remain strong, even amongst foreign institutional funds. Interest in Singapore has piqued at a time of market uncertainty amidst escalating trade tensions and weakness in the emerging markets. Singapore is viewed as a safe haven for both capital preservation and appreciation.

Foreign institutional investors were rewarded when the office market rebounded in 2017 and continued gaining strength in 2018. The strength in office capital values is underpinned by a very strong rebound of Grade-A office rents since 2017. Cushman & Wakefield’s basket of Grade-A office rents shows an 18 per cent jump from the trough in 1Q2017. This is just four per cent below the recent peak in 1Q2015. As a result, we expect a larger increase of 16 per cent for the office capital value for 2018, after it rose by 12% in 2017.

While commercial volume dipped to S$3.8 billion in 3Q2018 YTD due to a lower number of big-ticket transactions during the year, the commercial market is expected to grow in the medium-term due to the steady rising CBD rents and strong liquidity looking to diversify.

For example, ARA is in advanced negotiations to acquire Manulife Centre for S$550.0 million, while CLSA has put 77 Robinson on the market for S$725.0 million. Also, Khazanah Nasional Berhad may potentially divest their 60 per cent stake in Marina One and DUO Tower to aid in reducing Malaysia’s national debt of RM1 trillion.

The office market transitions into 2019 with a very tight Grade A office supply situation and steady demand for office space. The government’s relentless focus on sharpening Singapore’s attraction as a hub for business operations will undoubtedly keep many corporates operating out of Singapore and lure many more to set up offices in the city state.

Commercial investment sales grew with sustained investor demand, at 23.5 per cent compounded annual growth rates (CAGR) over the period between 2014 and 2017. Given that the tight supply situation persists alongside a continued compression in cap rates, it is likely that capital values will continue to grow by a further 14 per cent in 2019.

In addition, the hospitality sector is poised to grow further on the back of healthy visitor arrivals. Average hotel occupancy rates (AOR) in 2018 YTD has reached 87 per cent, the highest in a decade. Average daily rates (ADR) for the upscale, mid-tier and economy segments rose in 1H2018 as well to around S$261.50 (+1.4% from 2017), S$167.70 (+0.4%) and S$105.70 (+2.6%) respectively. Room rates may rise further as the stock of hotel rooms tightens. It is timely that URA released a Club Street site for hotel use in its 2H2018 GLS programme, the first time in five years. Similarly, the recent collective sale launch of Waterloo Apartments with approval to redevelop into a hotel has met with resounding response. 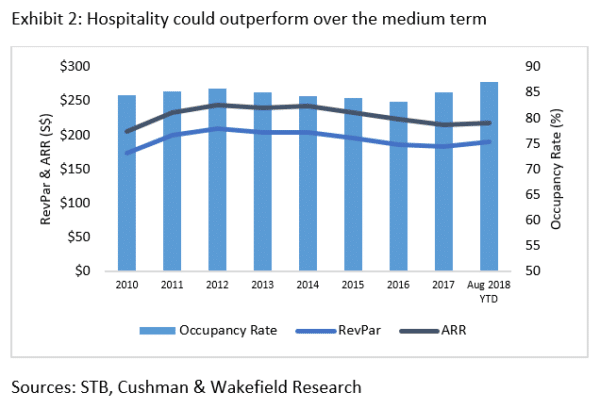 And whilst the latest round of cooling measures may have sounded the death knell on the residential collective sales, but demand for residential homes will continue to be anchored by a core pool of HDB upgraders and those who sold their homes en bloc. There is an estimated 6,700 households displaced by collective sales who will be looking for a home. The impact of the property cooling measures may not be as negative as market watchers expect.

In fact, the impact of the Total Debt Servicing Ratio loan framework at the end of June 2013 left a more severe impact. Post-TDSR, residential sales volume dropped 42 per cent. The July 6 measures saw sales fall 20 per cent. Year to date, 42 per cent of the new projects have sold more than one-third of the units within the first month. Price-wise, the URA private property price index flatlined in 3Q2013 after the announcement of the TDSR framework. But prices continued to rise in 3Q2018 this year, even if only 0.5 per cent from 2Q 2018. Developers who have hit the right notes in pricing and location have succeeded.

JadeScape on Marymount Road, Mayfair Gardens on Rifle Range Road, Park Colonial in Woodleigh and Riverfront Residences on Hougang Avenue 7 have all recorded steady sales post the July 6th cooling measures. Cushman & Wakefield is confident home price growth will remain positive, albeit at a much slower trajectory between 0 and 3% next year, and the new homes sales to maintain the momentum of around 9,000 to 10,000 a year.

This article first appeared in The Business Times on November 15, 2018, under the headline “Singapore real estate continues to hold value for investors”.