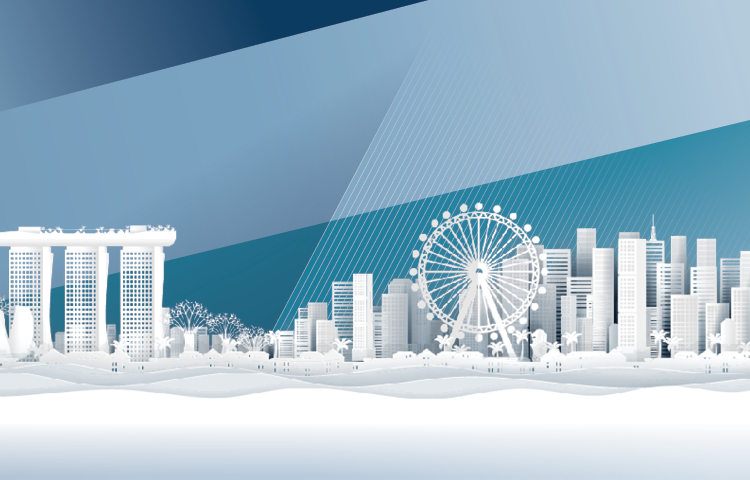 What Will The Singapore Carbon Tax Cost You?

What Will The Singapore Carbon Tax Cost You?

WHAT IS CARBON PRICING?

Carbon pricing is a market mechanism aimed at reducing carbon emissions by passing the cost of emitting on to emitters. The ultimate goal of these policy instruments is to tackle climate change - decarbonize economic activities and allow countries and governments to fulfill their net-zero commitments. According to the World Bank, there are 64 carbon pricing mechanisms active or scheduled for implementation globally, covering 45 countries. In 2021, these covered 11.65 gigatons of carbon emissions, representing 21.5% of global carbon emissions.

Singapore implemented its carbon tax in 2019.  At the time it was the first country in Southeast Asia to introduce a carbon pricing scheme. There are several different approaches including emission trading systems (ETS) in the EU, South Korea and China; Carbon Adjustment Mechanism (CBAM) in the EU and carbon taxes such as Singapore’s carbon tax at SG$5 per ton of CO2. In the case of Singapore, the tax revenue will be re-invested by the Singapore government to fund industry measures to reduce emissions.1

Up until now, Singapore’s carbon tax has impacted only a small number of very large carbon emitters directly. The tax rate was set low and applied narrowly, to give the market time to adapt. However, in order to be a genuine driver of change, the carbon tax needs to be set at a level which incentivises taxpayers to redirect funding and resources towards greener solutions.2

As part of Budget 2022, Minister for Finance, Mr. Lawrence Wong announced the carbon tax will be gradually increased from the current SG$5/tonne of carbon emissions up to SG$50-80 in 2030. The first payments under the newly proposed tax levels will be due in 2025, based on 2024 emissions.

The rationale outlined by Minister Wong is to support Singapore’s net zero ambitions and commitments made at COP26 and transition to a low carbon future.

Some elements of the carbon tax remain unchanged – the tax will only be directly levied on facilities that directly emit at least 25,000 tons of greenhouse gas emissions annually. However, the size and quantum of the increase means that it is inevitable that even low emitting industries and even consumers will be impacted. 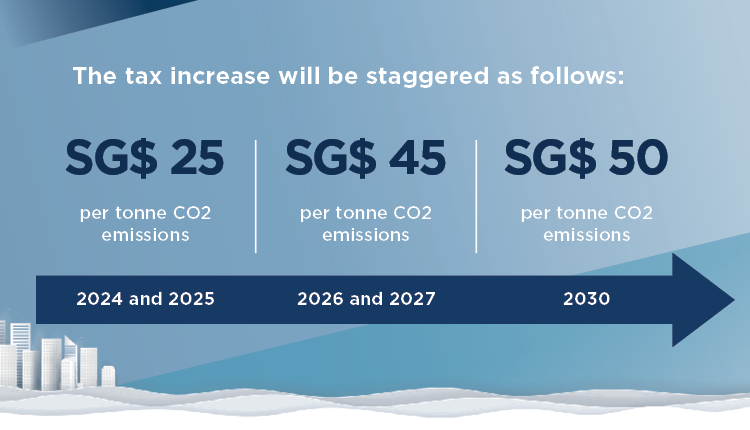 WHAT WILL IT COST?

FACILITIES (Direct):
A typical facility that is currently a carbon tax payer will incur a substantial cost increase in their liability, even if there overall production remains the same. At $5/tonne a facility may be liable today for $20,000. When the tax is lifted to $25/tonne their liability will increase to $100,000, a 5-fold increase for the same level of emission.

END-ENERGY CONSUMERS (Indirect):
End energy users who do not trigger the 25,000 ton emissions threshold will likely realise an additional 0.8c/kWh on their electricity bill once the carbon tax hits $25. Below is an example of a property in Singapore, and the likely increasing cost of electricity they will realise as they transition through the tax changes, without any energy efficiency interventions. 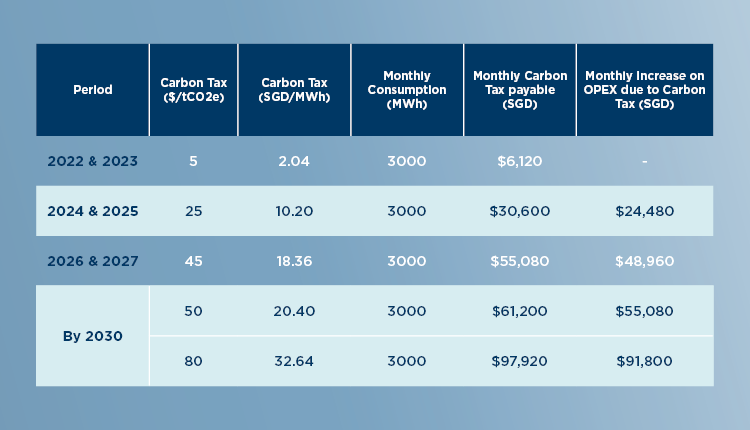 WHO WILL BE IMPACTED?

HOW TO REDUCE OPEX EXPOSURE?

The key in reducing an increase in operational expenditure relating to the increasing carbon tax within the built environment (occupier and owner) is to drive energy and carbon efficiency into operations. As such, Cushman & Wakefield will be supporting our clients to review and consider opportunities such as:

These initiatives have upfront costs but will reduce reliance on increasingly costly energy from the grid. Reducing the reliance of the property or tenancy on the grid will also reduce the chances of the asset becoming stranded.

HOW TO REDUCE END-ENERGY USER EXPOSURE?

The Singapore carbon tax will be passed onto consumers through increasing commodity prices, such as electricity, fuel, and transport, as seen in many countries. This has the potential dual impact of (i) disproportionately impacting end-energy user consumers, particularly those from lower-income households, and (ii) failing to sufficiently incentivise businesses to switch to lower-carbon alternatives, as the easier option would be to pass the costs on to the consumer.

There are several measures that can be considered to counter these costs, including subsidies for lower-income households to offset rising electricity costs and incentives for businesses to redirect investments to projects focused on reducing emissions and pursuing energy efficiency at our properties through retrofit.

WHY IS THIS GOOD?

Ultimately, the carbon tax will incentivise improved energy efficiency and carbon reduction business cases for all organisations and properties in the country. It will promote green technology and super low energy facilities, reducing Singapore’s contribution to climate change and reduce the country’s carbon footprint. The staggered increase in carbon tax will give companies sufficient time to make changes to their operations that will protect them from the increasing cost of electricity while disincentivising the use of grid electricity.

As China aims to hit peak emissions before 2030 and for carbon neutrality by 2060, a challenging transition in the power-consuming data centre industry is expected – to sustain the industry’s development and fulfil new standards.
Summer Chen • 03/12/2021 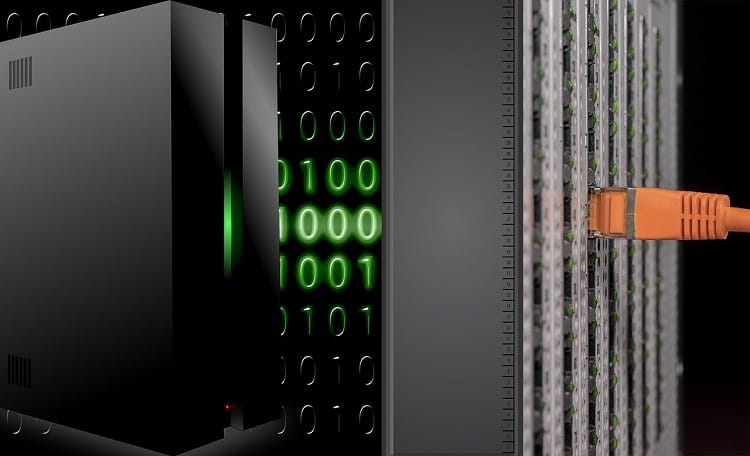 Whats Next for Data Centres in Indonesia

Looking ahead, the large population in Indonesia, the rise of the digital economy and rapid digital transformation among corporates are all driving factors that will support the data center market.
Wira Agus • 17/11/2021 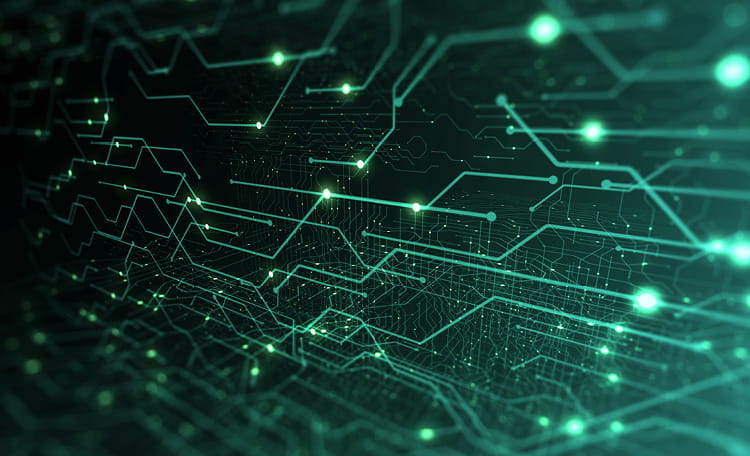 As data centers thrive worldwide, questions are being asked about sustainability and environmental impact.
Andrew Fray • 09/11/2021
Your privacy matters to us
With your permission we and our partners would like to use cookies in order to access and record information and process personal data, such as unique identifiers and standard information sent by a device to ensure our website performs as expected, to develop and improve our products, and for advertising and insight purposes.