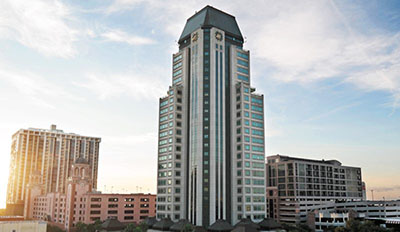 Partners Lanfranco Pescante, David Anderson, Lou Dommer and Executive Chef Fabio Viviani of Bravo’s “Top Chef” will bring the high-end Italian concept to the heart of downtown St. Petersburg this spring. La Pergola will be Nocturnal’s first restaurant outside of downtown Tampa, where it has opened a highly successful row of restaurants along Franklin Street, including Osteria and Mole y Abuela, as well as the upcoming Shibui.

“I moved to St. Pete as a 17-year-old boy from Italy to follow the American Dream,” said Lanfranco. “I started as a dishwasher at Lone Star Steakhouse and worked my way up in the restaurant and bar scene. I am beyond excited to go back to where it all started and bring an authentic Italian concept to downtown. The development of St. Pete over these past few years is beyond impressive, and we couldn’t be more thrilled to become a part of it by bringing La Pergola to this spectacular location.”

Riding on Franklin Manor’s popularity, Anderson and Pescante then brought on partner and friend Fabio Viviani to bring an elevated cuisine component to its next concepts. In addition to “Top Chef,” Viviani has appeared on dozens of food-centric television shows and is one of the featured chefs for Epcot’s upcoming Food and Wine Festival. Having opened over 30 restaurants in the U.S., Italian native Viviani brings his reputation for authentic food and exceptional service to each of Nocturnal’s concepts.

“As a chef and hospitality developer, I am very excited to put my foot down in the St. Pete area,” said Viviani. “Aside from the gorgeous waterfront scene and the good people living there, St. Pete has become a community that has embraced good food, good hospitality and great drinks. We will bring all of that with La Pergola.”

La Pergola will be located on the bottom floor of 200 Central, a 26-story, Class A office tower. It will join three other restaurants at the base of building: The Mill, Craft Kafe and the soon to open Dig In.

“We are thrilled for the opportunity to extend Nocturnal Hospitality Group’s success to downtown St. Pete,” said Ken Jones, CEO of Third Lake Capital, which owns 200 Central. “Fabio and his partners David and Lanfranco are professional restauranteurs who pride themselves on perfecting an authentic quality dining experience that blends with the vibrant and emerging demographic of downtown St. Pete.”

The La Pergola space was previously occupied by Raymond James but will now serve its originally intended purpose as a restaurant/retail space. Third Lake Capital and Nocturnal Restaurant Group will be undertaking a major renovation to the location in the coming months.

“We are fortunate to have a landlord with the insight and desire to reinvigorate this former office space into a destination restaurant, a use that better serves the property and the downtown St. Pete community overall,” said Cushman & Wakefield Director Wendy Giffin, who serves as the exclusive leasing agent for 200 Central. “La Pergola is an exciting addition to downtown St. Pete and a great complement to our existing restaurants and amenity base.”