Cushman & Wakefield Hired for Leasing of The Railyards in Sacramento

SACRAMENTO, Calif., February 11, 2020 – Cushman & Wakefield announced today the firm has been hired by LDK Ventures to provide office leasing services for The Railyards, a prominent new mixed-use development project located along the Sacramento Riverfront in Downtown Sacramento, California. The mega project looks to transform 244 acres of historically significant land into a thriving, mixed-use community in the heart of Sacramento. 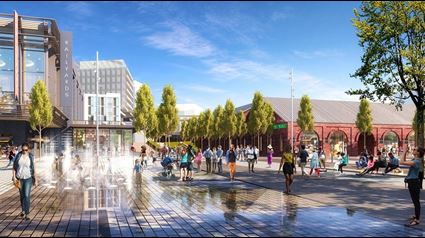 The Railyards is slated to feature a total of up to 5 million square feet (msf) of brand new Class A office space, together with a substantial amount of new retail space. The project will initially kickoff construction with the delivery of 300,000 sf of office in two 150,000-sf multi-story buildings collectively known as The Foundry. The initial phase will include a small-scale retail element and is expected to be shovel ready in the fourth quarter of 2020.

Ron Thomas, Executive Director and Managing Principal for Cushman & Wakefield’s Sacramento market, said, “We are grateful and thrilled to be chosen as the leasing team for The Railyards, a project set to become one of the most innovative and monumental new developments in the history of Sacramento as well as Northern California—a region greatly recognized for its cutting edge, world class real estate design.” He added, “Utilizing our deep, inter-connected platform, our team will work tirelessly in helping fill this extraordinary development with companies of the highest quality and who we hope will be just as excited in being part of The Railyards and Sacramento’s urban fabric as we are.” 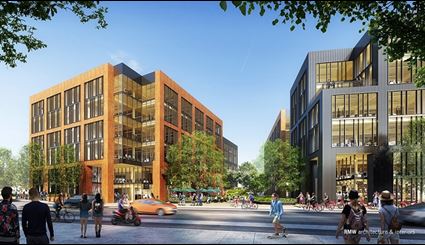 Named after its prosperous past, the site of The Railyards once served as the western terminus of the Transcontinental Railroad. At the time, it was a hub of innovation, entrepreneurship and technology, and was the largest employment center in the region. That historic era is represented by the Central Shops Historic District, which serves as the foundational cultural amenity of the project. The project is also near the many other shopping, dining and entertainment amenities of the central business district, including the Golden 1 Center arena. The project is truly a transit-oriented community providing direct access to Sacramento Valley Station intermodal facility which includes passenger rail, light rail, and bus. 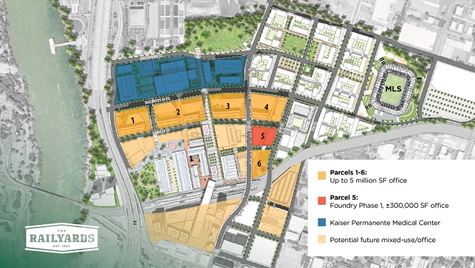 “We are thrilled to be another step closer in making our vision of The Railyards a reality and delivering something truly spectacular to this historical and in many senses iconic community,” stated Denton Kelley, Managing Principal of LDK Ventures. “The Railyards brings an exciting new vision of thoughtful urban development in Sacramento community; a dynamic mixed-use district that connects the community to its roots, neighbors, culture, and the future of Sacramento.”

Mr. Kelley continued, “With Cushman & Wakefield, we have chosen an all-star team with strong proven experience and who hail from core areas of Northern California where we feel a good chance our office user pool could originate, whether through expansion or relocation.”

J.D. Lumpkin, Executive Managing Director in Cushman & Wakefield’s San Francisco office, concluded, “The Railyards is arguably the most exciting and dynamic mixed-use urban redevelopment project on the West Coast. It is rare to see all of the amazing components of a project of this scale materialize in fairly short succession. The ability to grow at scale in Northern California, with access to an amazing talent pool and incredible quality of life in Sacramento right in the buzzing downtown of our state capitol—that will prove a pretty compelling proposition for employers headquartered in the Bay Area, as they expand their footprints to complimentary markets to access new employee talent.”