Haneda: From An Airport To An Aerotropolis

While the impact of COVID-19 is severely impacting on airports across Japan, particularly Haneda that enjoyed a great amount of benefits with the increased inbound tourists over the last few years, the airport has been taking positive long-term growth strategy even before pre-COVID-19, which should not be forgotten.

The airport will no longer be the same as it forms as a city. Haneda Airport was Greater Tokyo’s sole international airport until the opening of Narita Airport in 1978. From then on until 2010, Haneda Airport served just domestic flights and limited regional chartered flights. Since 2010, Haneda Airport has started to expand regional and long-haul services again, with the opening of an international terminal building constructed after a government policy change. In the year of the Olympics, the authorities planned to permit aircraft to fly over Tokyo city center from March 29, enabling 50 additional international flights per day and 39,000 landing slots per year. If COVID-19 had not taken place, the airport was expected to welcome more than seven million additional international passengers Haneda every year. Nonetheless, major development projects are underway with the long term capacity increase.

To fully leverage the opportunity presented by the re-internationalization of Haneda Airport, unused land near the international terminal (to be renamed Terminal 3 in 2020) is to be redeveloped to transform Haneda airport into an Aerotropolis – a place for tourists to shop and stay and for citizens to work and play. The project is divided into Zone 1 and Zone 2 and is now named as “HANEDA GLOBAL WINGS”.

The main components of HICity will be offices and laboratories for creative and advanced research and development activities. As a hub for creativity and promotion of new industries, HICity aims to incubate innovative technologies through collaboration with SMEs. It is expected to have state-of-the-art research capabilities in the areas of medicine, mobility, robotics, hydrogen technology and so on. HICity will provide an environment where regenerative medicine can collaborate with clinical functions, and a demonstration area where automated driving can be showcased.

While serving as a workplace, HICity will also be a destination for passengers arriving at Haneda. HICity is conceptualized as a gateway to Japan, where visitors can experience Japanese culture and hospitality, greenery and landscape design. Functionally, in additional to offices and conference centers, it will also feature a live music venue, representative Japanese cuisine restaurants, and experiential stores.

Zone 2 of the Haneda redevelopment project, named Haneda Airport Garden, is developed by Sumitomo Realty & Development. The project was originally planned to open in Spring 2020, which is now postponed. Like Zone 1, it forms an important part of the conversion of Haneda Airport into an aerotropolis.

Haneda Airport Garden includes a hotel complex with over 1,550 rooms, the most among all airport hotels in Japan. Another luxury hotel of 150 rooms and hot spring facilities will be included in the development projects. The lower levels of the facility will comprise a shopping mall housing 90 stores and restaurants.

The needs of MICE tourists are also taken care of. An event space with a capacity of 700 participants is to be included in the first floor of the complex. A bus terminal with local and intercity bus connections to other parts of Japan will have over 800 departures per day.

This new Haneda City is also expected to improve environments of neighboring sub-markets.

KAWASAKI TO JOIN AS PART OF THE AEROTROPOLIS

Haneda Airport is located at the edge of Tokyo Metropolis, next to the Tama River. On the opposite side of the river is the city of Kawasaki, in the Kanagawa Prefecture. Seeing the growth of Haneda Airport, Kawasaki city is actively working to involve itself in the creation of the Aerotropolis.

King Skyfront, with a site area of 40 hectares, was originally occupied by the Isuzu Kawasaki Plant and the rest by the LP gas terminal of San-ai Petroleum. With the withdrawal of the Isuzu Kawasaki Plant in 2004, the west side was sold to the Urban Renaissance Agency and the east side to Yodobashi Camera. In March 2011, the Kawasaki city government renamed the area King Skyfront and planned for it to become a center for life sciences and environmental research. In December 2011, there has been designated as an International Strategic Comprehensive Special Zone and a National Strategic Special Zone.

In 2019 there was 67 institutions and 4,700 employees working there, including Johnson & Johnson Tokyo Science Center, ANA Tonomachi Business Center, Innovation Center of NanoMedicine, National Institute of Health Sciences and PeptiDream.

Adjacent to Tokyo, Kawasaki has been a preferred location for residential urban development, such as Musashi-Kosugi. The city government looks forward to King Skyfront as the next location for economic revitalization and to gradually transform from an industrial city into an R&D base.

King Skyfront is not just about research and development. In zone A The Warehouse complex opened in 2018. The primary part of the facility is a city hotel which also targets airport passengers with its proximity to Haneda. There are also co-working spaces, restaurants and cafés in the complex. TREX Kawasaki, a sport experience provider, is another attraction for tourists to enjoy standup paddleboarding, kayaking and fishing in Tama River or to do yoga, strolling or jogging near the facility.

In terms of tourism, although King Skyfront is mainly for research and development, there are also resources for visitors. In addition to The Warehouse complex facilities, night cruises and bus tours to the famous light-up scenery of Kawasaki factory zone are popular for both domestic and foreign visitors. With the opening of the Haneda Connection Road, King Skyfront will join Haneda Airport to form an aerotropolis for work and for leisure. 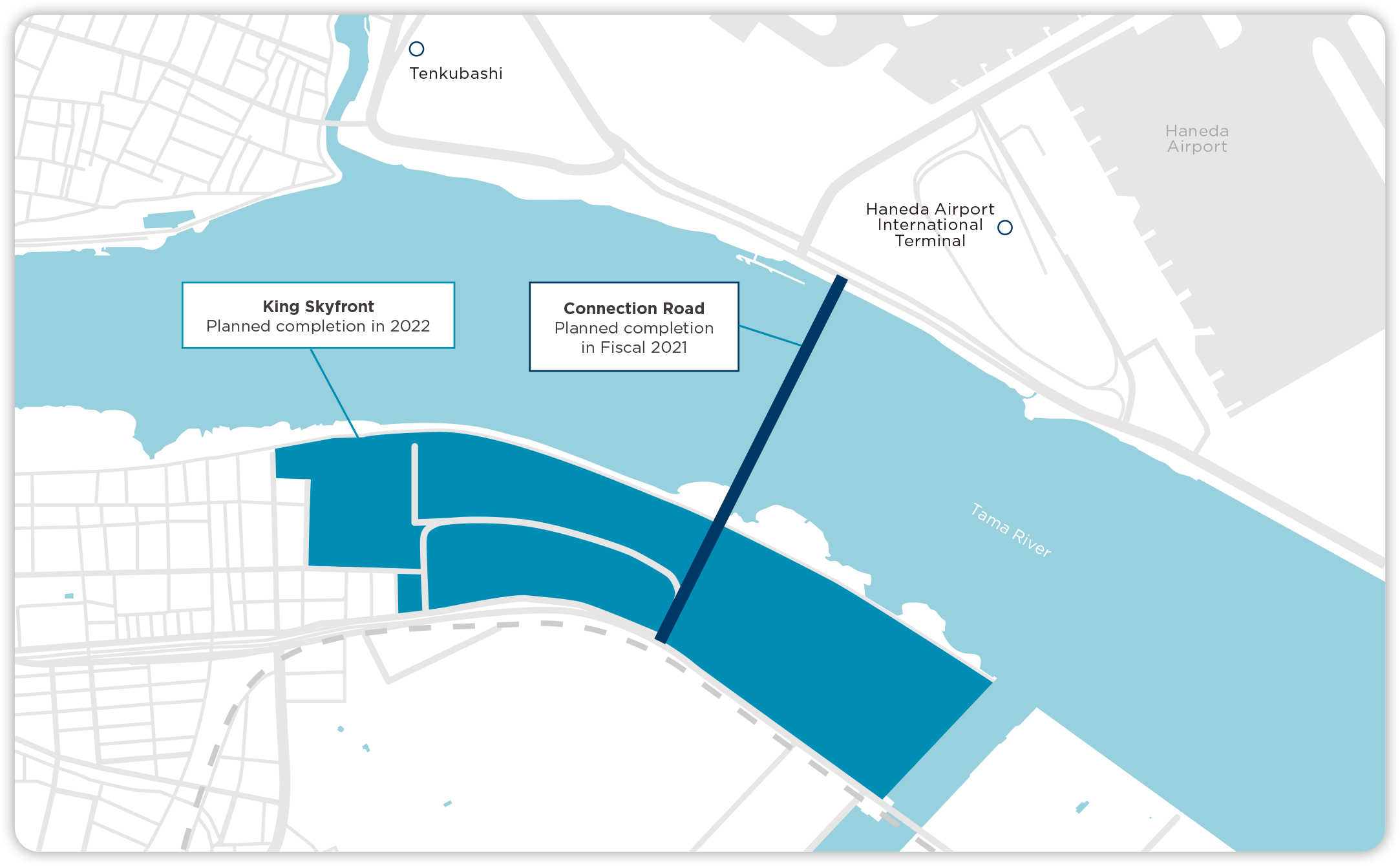