Standing on Their Shoulders

When I think of International Women’s Day, I cannot help but reflect on the hardships, challenges and sacrifices of the generations of women before us. It is the shoulders of these women on which we now stand, and their efforts that have moved us forward towards our goal to treat all genders as “Each for Equal”.

I feel especially privileged to have witnessed this progress in my own family. My life, goals and perspectives are very much shaped by these experiences. I love the story of my maternal grandmother, a woman only two generations behind mine. Her name was Eugenie. Eugenie married in her late teens in Cairo, Egypt just before WWII. She was only afforded a primary school education, considered at the time to be more than enough for women of the day.

Eugenie went on to have five children – two sons and three daughters, including my mother. My uncles are wonderful, kind, successful men and they have a story of their own. But it is the story of my mother and my 2 aunts of which I am particularly proud. 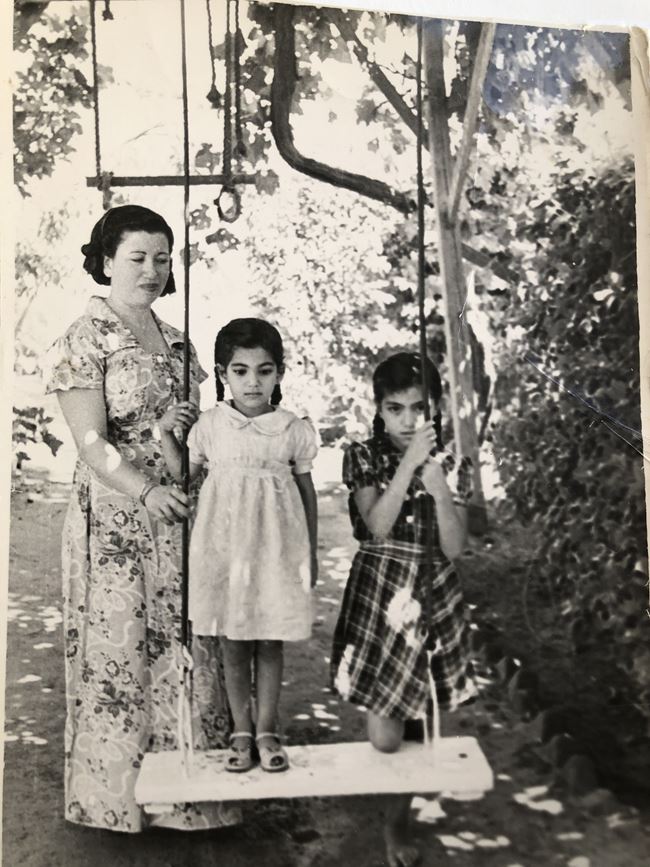 My grandmother with my mother (centre) and one of her sisters.

Eugenie’s 3 daughters, at her urging, all went on to excel at high school and continue to university and post graduate study. My mum used to tell us stories of Teta Eugenie (“Teta” being the Arabic word for grandma), who would spend hours sitting with them while they studied, reading what she could, listening and questioning them about what they were working on.

These days, we might accuse such a mother of being a helicopter parent! But that was not what Teta was doing. It wasn’t that she was pushing or forcing her children. She was desperately keen to learn more herself and it was her passion for learning that spurred them on.

In the end she raised five university educated professionals – two doctors, two pharmacists and one engineer. My aunt once said that Teta Eugenie might not have gone to high school but through her interest and passion combined with her encouragement and support, she effectively completed five university degrees alongside her children. Not bad for a woman with just a primary school education!

Teta Eugenie lived with my family until she passed away, so I had the privilege of sharing my childhood and teenage years with her. Her joy in what her children, and especially her daughters, had achieved and accomplished in just one generation fills me with both pride and gratitude. But the story doesn’t end there! The women in my family took only one generation to achieve equality in education opportunities. And then my mother decided she would conquer the workplace next.

Remember that engineer I mentioned? Well that was my mum. She studied civil engineering and graduated at the top of her class at Cairo University. Following completion of her engineering degree, she received scholarship offers from all around the world to undertake postgraduate study. She and her husband (my dad who is also a talented civil engineer) decided on an opportunity in Australia. That opportunity led her to become the first woman in Australia to earn a PhD in engineering.

My mother receiving her PhD.

That of itself is an incredible achievement. But she accomplished this in just a few years of migrating to Australia. Her PhD was in English, her second language. To top it off, she completed her PhD the year that I was born. Civil engineering in Australia was, and still is, a field lacking in gender diversity. To be such a pioneer at that time was lonely and isolating. She persevered anyway and in doing so, made globally recognised contributions to building and construction through her esteemed career.  She didn’t do it entirely alone though. One of her biggest fans and supporters was my dad. Despite a successful career of his own, he took time out to support her study, to care for his children and to encourage her in the dark and frustrating moments in her career. My dad the feminist!

In my view, Superwoman does exist, and she was my mum, a small Egyptian lady with an incredible mind and the greatest determination. Unfortunately, she passed away 7 years ago after a brave battle with cancer, taken from us far too soon.

She has left a legacy that I can only dream of and big shoes to fill. But really what she has left me with is an eye witness account that women have capacity to make brilliant and inspiring contributions at home and in the field – whatever that field might be.