The Rise of Coworking in Greater China: Six Key Markets to Watch

The sharing economy in Greater China is on the rise and the fastest growing segment among them is the co-working space. To date, there are about 546 sizable co-working centers spread across Greater China by the end of the first quarter of 2018, according to Cushman & Wakefield’s Greater China Co-working Office Space report.

This growth can be attributed to several factors such as technological advancements, demand for cost-effective and flexible lease terms, and the rise of the millennials. While the major co-working players in the region have significant presence in the gateway cities of Beijing, Shanghai and Hong Kong, there have been notable co-working activities in other city markets in the last 12 months. These six city markets are reshaping the office sector in the region in terms of co-working activity.

Here’s an overview of these six key markets and an outlook on how the co-working movement will play out in the region in the next few years. 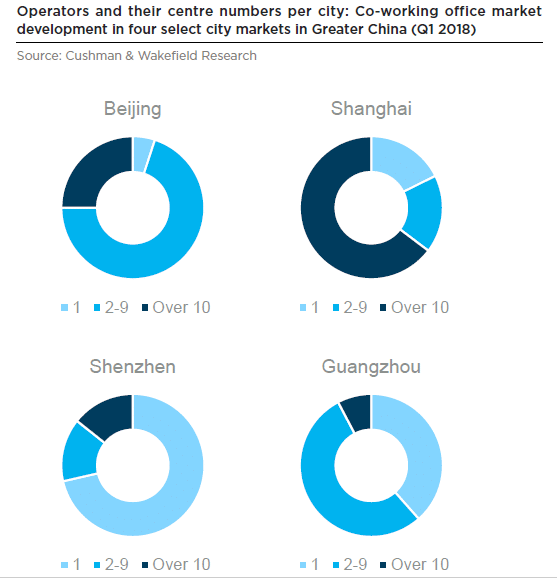 The 2016 arrival of co-working giant WeWork in Hong Kong disrupted the few local players operating in the city. Since then, the sector has exploded with new entrants and multiplying locations across the city’s major submarkets. Local co-working operator naked Hub (acquired by WeWork) led the way followed by Ucommune and Guangdong-based Atlas.

Low availability of Grade A office spaces in Beijing has led to many co-working operators to set up shop across the city. While local operators SOHO 3Q and Ucommune are dominating the city market, global brand WeWork has partnered with regional operator Sino Ocean Group to open five centers in Beijing.

Co-working presence in Shanghai was previously seen in Grade B/C office buildings and renovated projects. However, it eventually expanded to include Grade A office spaces, with WeWork forging two lease deals with China Overseas International Center and ITC Phase I. Local co-working operators like Distrii are also growing their presence in Shanghai.

Guangzhou is seeing rapid growth of the co-working sector with local operators leading the market. Real estate developers and agencies such as Mayland Group and World Union have also opened their own co-working centers in the city.

Most of the co-working spaces in Shenzhen are concentrated in old office buildings and used by startups and small and medium-sized enterprises (SMEs). Domestic operators such as Atlas and SimplyWork are the city’s major players but foreign brands are increasingly catching up.

As the co-working sector in Greater China develops over the next few years, it is expected that it will increasingly be featured as a key element of a corporate’s real estate strategy. Moreover, the sector in the region is likely to move in the following directions as it seeks new markets and new business opportunities:

To get the full insight on Greater China’s co-working market, download the report here.