Pattillo Industrial Real Estate recently celebrated one year in its new headquarters at Trackside-Chamblee, a 93,000-square-foot, MARTA-adjacent project developed by the firm in collaboration with Parkside Partners.

Cushman & Wakefield recently caught up with Joshua Harrison, Chief Operating Officer of Pattillo, about the history of the project, Pattillo’s headquarter space, and what’s next.

From Stone Mountain to Chamblee

In 2015, Pattillo, a third-generation developer and the largest privately held industrial development operation in the Southeast, sold its 4.1 million-square-foot Stone Mountain Industrial Park. The company developed the master-planned park where its headquarters was located, and upon selling the park, decided it was time to relocate. As a developer, it was important to the company to develop its own headquarters building.

Pattillo determined a series of factors were important in their relocation, including easy and multiple access points to the interstate and proximity to its client base and valued business partners. The company engaged Chad Koenig of Cushman & Wakefield and Lawrence Gellerstedt, formerly of Cushman & Wakefield, to assist in scouting locations north of the city, including neighborhoods like Buckhead and Brookhaven. Ultimately, Chamblee, a small northeast submarket starting to show signs of growth, was chosen as a prime location. 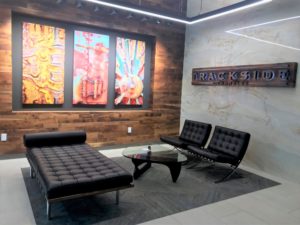 “For years, Pattillo was successful developing industrial parks by identifying development locations one exit beyond where everyone else was developing and then waiting for demand to arrive,” Harrison said. “Trackside-Chamblee was somewhat similar in as much as it was a pioneer project for the area, which is now rich with multifamily and mixed-use development.”

Pattillo found a former two-acre MARTA parking lot adjacent to the Chamblee station as a prime location for new development. When the station opened in 1987, it was the final stop on the Gold Line, so additional parking was required. However, the line extended further north to Doraville in 1992, meaning the additional lots were now obsolete.

Pattillo approached Parkside Partners, another local developer, to form a joint venture in 2016 to pitch the project to MARTA. Parkside Partners has a history of delivering high-quality loft office space, which is what Pattillo envisioned for the office portion of the project. MARTA had plans to ultimately develop the site, but not for another four to five years. However, they agreed to fast track the RFD process for the ground lease, which the joint venture won.

“We wanted to create a multi-tenant building but still offer an intimate feel,” Harrison said. “Trackside-Chamblee has been a great asset for the community. Although it’s a new development, we made sure to align the architecture and design with the character of the city.” 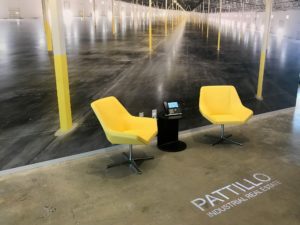 After 25 years at its former headquarters in Stone Mountain Industrial Park, the firm had the chance to create a modern, collaborative office with design by ASD|SKY and DPR as the contractor on the base building and interiors for the Trackside development. When you step off the elevator into Pattillo’s space, the first thing you see is a branding wall featuring a large empty warehouse space and Pattillo’s name lit up on the floor from a projector above.
“It really gives a great first impression of who we are and what we do,” Harrison said. ““Our space at Trackside seeks to be a reflection of the professional quality and attention to details that we bring to our industrial developments. It’s quality space delivered with an eye towards functionality.”

Its previous headquarters was largely comprised of private offices, so the move to an open environment was quite the change for its employees, who average more than 20 years of tenure. In fact, even leadership abandoned offices in favor of sitting with the employees.

“Development requires expertise and teamwork – it’s the backbone of what we do,” Harrison said. “If we aren’t talking while projects are being developed that’s a problem.”

Because of the time lapse between the sale of Stone Mountain Industrial Park and the completion of Trackside-Chamblee, the firm had a two-year temporary sublease in an open environment similar to what they were planning for their new headquarters. With time to learn what the firm liked and didn’t like, they chose to move forward with the originally designed open floorplan. 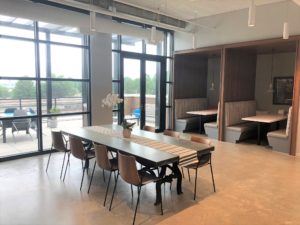 Employees aren’t confined to their desks, though. The space features several collaboration spaces, from private offices to conference rooms of all sizes (named for mascots of employee’s alma maters) to a private balcony where employees can watch planes land at DeKalb Peachtree Airport.

“A year later we wouldn’t change anything about the space,” Harrison said. “This is our long-term home to serve the next generation.”

In April, Chamblee broke ground on the expansion of the Rail Trail, a multi-use path that could eventually connect with the Peachtree Creek Greenway, which is then expected to link with the Atlanta BeltLine. Currently, the Rail Trail snakes through the city’s residential and commercial districts, linking pedestrians and cyclists to the Chamblee MARTA Station and nearby Keswick Park, according to Curbed Atlanta. This trail will pass directly alongside Trackside-Chamblee, which should fuel continued success for the development.

Additionally, Larry Callahan, CEO of Pattillo, has been one of many local business leaders involved with making a Community Improvement District (CID) for Chamblee and Doraville a reality. Callahan, along with other members of the business community, formed the Peachtree Gateway Partnership in 2014 to support infrastructure and other improvements in North Dekalb.

Commercial property owners began meeting in March 2018 with the intent to form the CID. As part of the CID, member businesses agree to tax themselves to pay for certain community projects in areas such as transportation, signage, beautification, and other improvements. In its final stages, the CID is expected to be finalized this summer.

In April, Callahan told the Atlanta Business Chronicle, “First and foremost, the CID is the voice of the commercial property owners in the community. That’s very important as the area is going through a transformation. I think we’re going to get it done, and then we’re going to grow it from there.”

Pattillo plans to remain actively involved in the community that it calls home.