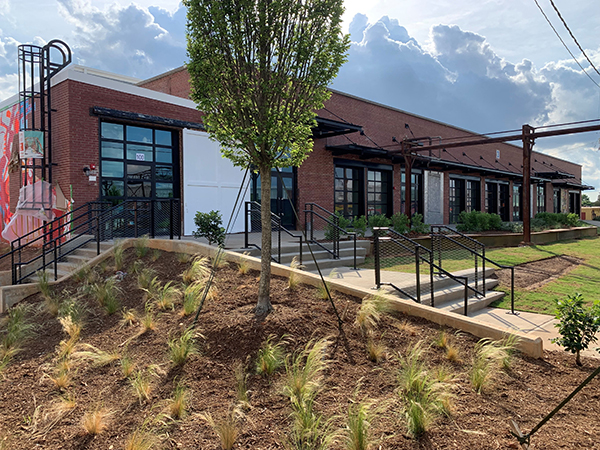 The new 1,800 square-foot restaurant, called Leah & Louise, will be located at the base of 301 Camp Road, adjacent to the recently announced Free Range Brewing, OTPST Station and MacFly Fresh Printing Co. Set to open in late fall 2019, Collier’s latest restaurant concept will be inspired by a traditional Memphis juke joint, featuring Southern-style cuisine, a full-service cocktail bar, a lounge area and live music. Expect the menu to reflect his interpretation of classic Southern dishes, ingredients, and techniques.

This latest commitment at Camp North End comes as Chef Collier continues to gain national notoriety in the culinary, hospitality and beverage industries. Earlier this year, he earned a 2019 James Beard Award semifinalist nomination in the “Best Chef: Southeast” category, and Soul Food Sessions partnered with Coca-Cola Consolidated, the local bottler of Coke products, on a four-city tour to promote its mission of enhancing opportunities for African American chefs. In addition, Charlotte Magazine honored Collier and his wife, Subrina, with the 2018 “Charlotteans of the Year” Award.

“Camp North End is one of the few places in Charlotte preserving the architectural history of the neighborhood,” Subrina added. “ATCO has done a great job of beautifying a historic space and that’s in line with what we want to do. Being located in a historically African American neighborhood was also a key factor for us.”

“Chef Collier’s new restaurant will be an excellent addition to our site and a new must-visit culinary destination for the North End,” said Damon Hemmerdinger, co-president of ATCO Properties & Management. “Going beyond just food, Greg is a proven community builder and the right chef to continue developing our sense of place.”

Collier, 37, is one of Charlotte’s most notable culinary talents. Collier began his culinary career working at a popular hot wing restaurant in Memphis, where he realized he had a natural gift with specialty foods and their preparation, and advanced himself from line cook to kitchen manager. Following that, he attended Scottsdale Community College Culinary Program in Scottsdale, AZ, and then joined the Phoenician Resort as a breakfast chef, where he improved his expertise in the preparation of breakfast foods, especially eggs. In 2012, he and his wife, Subrina, moved to Charlotte and opened the Yolk in Rock Hill, SC. In 2019, the pair moved the acclaimed breakfast and lunch restaurant into 7th Street Public Market and renamed it Uptown Yolk. Camp North End will be Collier’s second restaurant location in the city.

Evelyn Adelman with Ascent Real Estate Partners represented ownership in lease negotiations. A team from Cushman & Wakefield, led by Jessica Brown, David Dorsch and Grant Keyes, are the leasing brokers for the office component of the property.

Camp North End is a state-of-the art creative development that is being designed and curated to cater to today’s most innovative and cutting-edge companies in Charlotte’s up-and-coming North End Smart District.

As one of the largest adaptive reuse projects currently underway in the U.S., the project is transforming a historic 75-acre site where people once manufactured Model T cars and assembled Hercules missiles into a catalytic hub of creativity and ideas.

With over one million square feet of space for work, artistic expression, dining and hospitality, entertainment, recreation and community building, together with new construction in coming years, Camp North End’s curated development will welcome residents from all parts of the Queen City and Mecklenburg County to make their future. The Boileryard is already open for happy hour every Friday evening through October, and its first redeveloped building is now occupied by local businesses and artists. Currently, developer ATCO Properties & Management is undertaking the adaptive reuse of five buildings on the site, including the redevelopment of the Gama Goat Building at 1701 N. Graham Street and a portion of the building facing The Mount, one of the project’s districts.

ATCO is a real estate investment and ownership platform deploying capital in select cities across the United States, with a particular emphasis on creating value through placemaking and other strategies in urban locations. We seek to improve people’s lives by creating places that they genuinely want to work, play, or live, and by doing our work with a long-term perspective.

Shorenstein Properties LLC is a privately-owned, real estate firm that owns and operates high-quality office, residential and mixed-use properties across the U.S., with offices in San Francisco and New York.

Since 1992, Shorenstein has sponsored twelve closed-end investment funds with total equity commitments of more than $8.0 billion, of which Shorenstein committed $723.5 million. The firm uses its integrated investment and operating capabilities to take advantage of opportunities that, at the particular time in the investment cycle, offer the most attractive returns. Investments have included ground-up developments, asset repositioning and stabilized assets; investment structures have included asset acquisitions, mezzanine loans, preferred equity investments and structured joint ventures. These funds have invested in properties totaling 64.1 million square feet in transactions with a gross investment value in excess of $15.2 billion.