PHOENIX, Ariz., June 3, 2020 – Cushman & Wakefield announced today the firm has represented the seller, an affiliate of San Francisco-based The Roxborough Group (“Roxborough”), in the disposition of the Perimeter Parkview Corporate Center in north Scottsdale, Arizona. 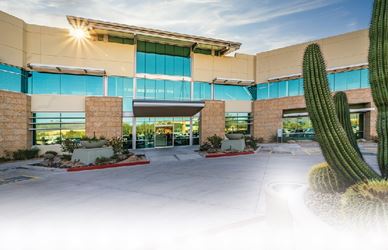 The buyer was San Diego-based Cush Enterprises, which acquired the 104,956-square-foot Class A office asset located at 8377 East Hartford Dr. for approximately $30 million, or roughly $286 per square foot. The transaction closed April 28.

Roxborough had originally acquired the Perimeter Parkview Corporate Center building and an adjoining 2.9-acre pad site in September 2017 for reposition—following that acquisition, Roxborough sold off the 2.9-acre pad to a local developer for a build-to-suit development. Roxborough purchased the building with expectations it would need to backfill the second floor assuming the existing tenant would likely vacate the following year after paying a termination fee. Within a year of the ink drying on that acquisition, Roxborough secured corporate headquarter tenant P.F. Chang’s China Bistro through a 53,559-square-foot lease that commenced in November 2018.

“Although we looked at various options for the excess land parcel, ultimately, we decided to sell a portion for development and keep a portion to build additional parking that was critical for the P.F. Chang’s global HQ lease execution,” said Matt McCormick, Managing Director of The Roxborough Group. “P.F. Chang’s was looking to showcase its global headquarter location. We worked closely with their team to create a perfect blend of Asian fusion design with a large open floor plan with creative office finishes. After completing our business plan, we are excited to have sold to Cush Enterprises, whose long-term outlook fits well with the long-term tenancy and positioning of the property,” commented McCormick.

“When I got into this business 25 years ago, no one ever showed me how to close a transaction in a global pandemic,” commented Chris Toci, Executive Managing Director of investment sales with Cushman & Wakefield. “For this transaction to occur, it took the collective efforts of a very talented team, led by my partner, Chad Littell, as well as our leasing professionals and property management team led by Michelle Bachand,” Toci mentioned.

“We are excited to complete our first transaction in Phoenix and believe highly in the metrics of this market. Perimeter Parkview is a gem within Scottsdale and we are eager to operate the building long-term and build relationships with our tenants. With our real estate holdings in California, this expansion in Arizona and a recent expansion into Nevada we look forward to growing our presence in these three western states,” said Nikolas Parrish.

The two-story, institutional-quality suburban office building is prominently located in the prestigious North Scottsdale office submarket within the Perimeter Center node and is surrounded by numerous corporate headquarter tenants, including within the building. Three nationally recognized tenants comprise 90% of the occupied area of Perimeter Parkview Corporate Center and offer a defensive and appreciating cash flow featuring multiple leases that boast nine years of average remaining lease term. The building was completed in 2006 and features a subterranean garage with direct tenant access.